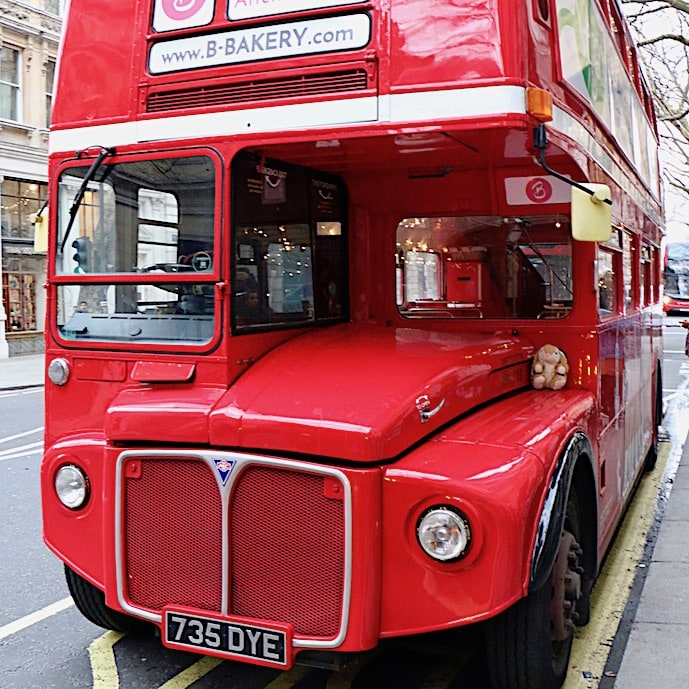 Bunny is a huge fan of the afternoon tea concept. She just cannot resist the old world charm and allure of delicious teas and cakes, scones, and her favourite cucumber sandwiches. All the better when nicely arranged on an impressive multi tier serving tray.

Usually, it is Mr. Bunny who is salivating about cakes and cookies on a daily basis (Bunny runs a tight ship) but it is Bunny herself who regularly books afternoon tea sessions for them around the world. So far, the Bunnies have experienced afternoon tea in Singapore, Sri Lankan tea trails, Vienna, Budapest and many other places.

When Bunny recently visited London, in cold and miserable February weather, she made sure to book a tour on the Afternoon Tea Bus that she had read about online some months earlier. The tour has quickly become quite popular and Bunny was unsuccessful on her previous visit to London trying to book a place.

Lesson learned, this time she made sure she was on the task early enough and booked the best places on the bus: VIP seats on the top deck. It was an easy and straightforward process to book and pay directly online on the company’s website.

In summer time, the company also runs an Afternoon Tea Boat Tour. Bunny quite likes the sound of that and has duly added it to her to do -list for her next London visit. The B Bakery bus is delightfully British. It is a real vintage double-decker, red (of course!) and cutely decorated, both inside and out. Mr. Bunny noted quite a few people gawking at the bus along the way, perhaps because of the decoration, and decided to give a royal wave every time someone rubber-necked.

The tables inside the bus are nicely arranged and your cakes and cookies are already laid out on the table when you board the bus.

There are two hosts to greet you when you enter the bus. Don’t be late as the bus will not wait for latecomers or issue refunds if you miss it.

The best seats (VIP) are upstairs in the front of the bus. They cost a bit more but are worth it as these seats offer an excellent view.

Some music is played on the bus during the journey. Bunny found that perfectly acceptable, particularly since the music was mostly from the 1980s and 1990s, which is, of course, the time when the best music was produced anyway. 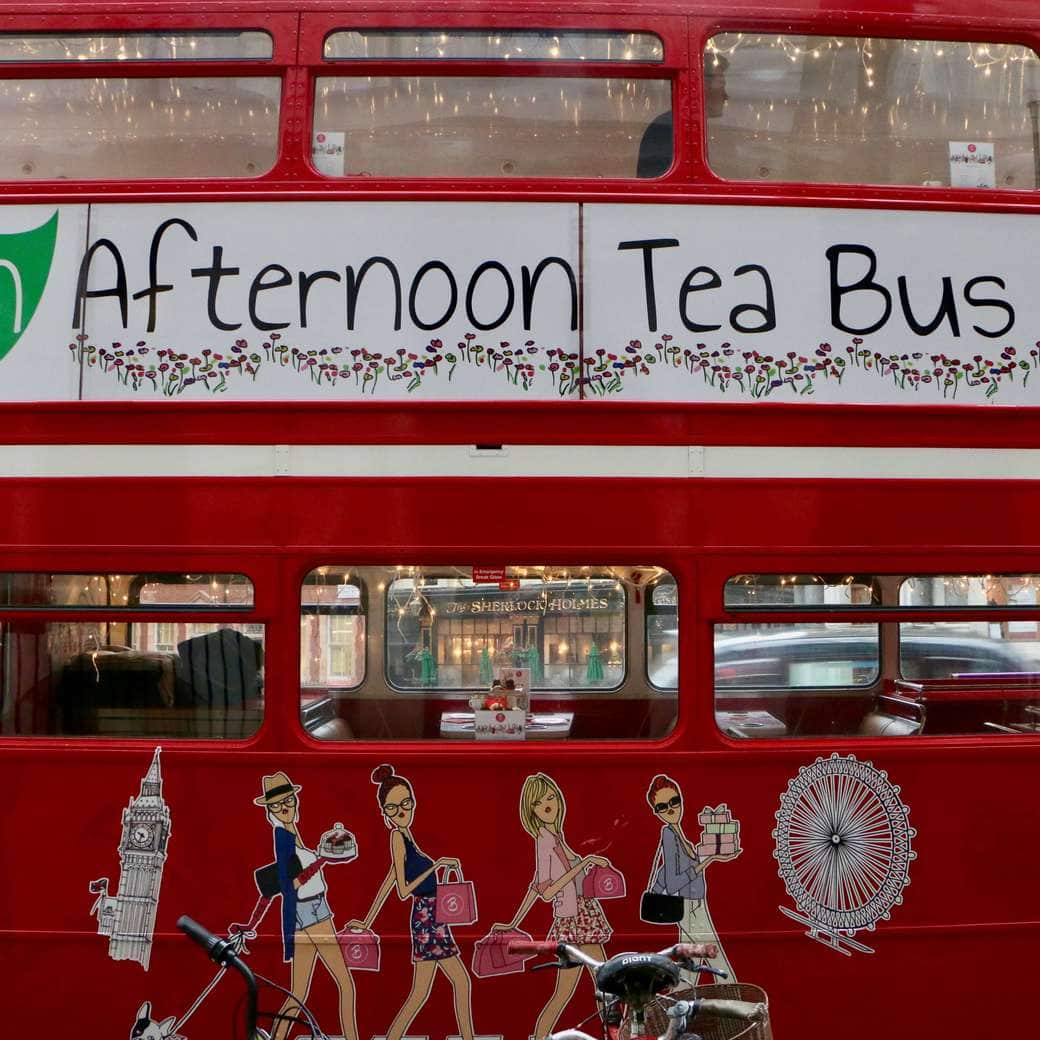 The Afternoon Tea Bus company offers traditional, vegan, vegetarian, halal and gluten-free options, as long as you book in advance. Bunny went for the vegetarian option.

At first glance, it did not look like a lot of food. This made Bunny slightly nervous. There is nothing scarier than the prospect of being stuck with starving Mr. Bunny on a 1,5 hour bus ride you cannot exist. In reality, Bunny was happy to note that the dishes looked smaller on the tray than they felt inside the tummy. A particularly nice surprise was the scone offered about half way through the journey, naturally accompanied with clotted cream and jam.

At the end of the ride, Bunny was surprised to notice that some people received doggy bags. Bunny herself had destroyed all the food in front of her during the first half of the tour. Oh well.

The hosts provide you with drinks menu at the beginning of the ride, with options for different teas, coffee and even hot chocolate. Bunny went for peppermint tea while Mr. Bunny opted for coffee. Sacrilege! Some people have no class, Bunny says.

The drinks were served in large, spill-proof plastic cups, decorated with the B Bakery Afternoon Tea Bus theme. Don’t be put off by the lack of real china. The cup is actually quite cute and you get to keep it as a souvenir at the end of the tour.

They didn’t advertise it but the hosts were also happy to refill your cup mid-way through the journey in case you gulp it all down in a hurry. Guess who did? 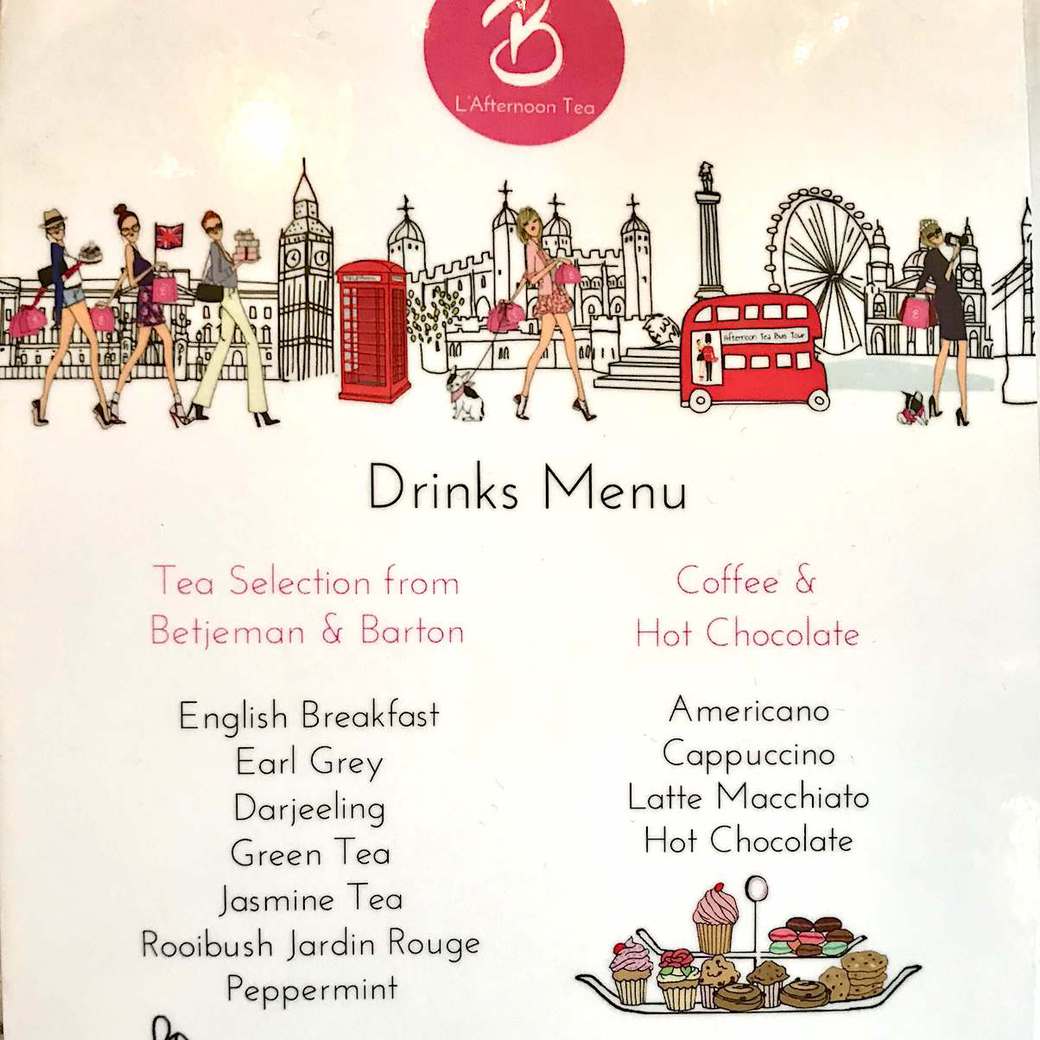 The afternoon bus has a fixed route that take about 1,5 hours to complete, depending on traffic. Although ideally suited for first-time visitors in London, Bunny thoroughly enjoyed her spin on the bus and Bunny knows London reasonably well.

You will be able to spot many of London’s top sights from the bus, including Big Ben, the Houses of Parliament, Westminster Abbey, St James’s Park, Hyde Park, the Royal Albert Hall, Marble Arch, Nelson’s Column and Downing Street (at least the heavy police presence guarding the entrance to the street).

The afternoon tea bus tours depart daily usually from the Victoria Coach Station. Two departures a day leave from 8 Northumberland Avenue, near theTrafalgar Square. Bunny’s tour was one of the latter but she had no trouble locating the starting point or the bus stop which is clearly marked.

There is some pre-recorded commentary along the route, which is fine, nothing spectacularly new but not annoying either. Occasionally, the hosts also pitched in with some additional comments.

Two hosts take care of the passengers on board during the ride. They brief you on security (no moving around in the bus), take care of your drinks and make sure everything runs smoothly.

Both hosts on Bunny’s tour were friendly and attentive. They kindly offered to take pictures of the Bunny family and regularly wiped clean the inside of the windows for better visibility when they got a bit foggy due to the cold air outside (it was February, remember).

Although Bunny is not normally the over-zealous tipping type (that honour goes to Mr. Bunny), she felt a bit bad in the end when she discovered she had only large bill notes fresh from the bank machine and had not prepared a small tip for these hard working youth…

Despite having a great time on the bus, Bunny thinks there are some things that could further improve the Afternoon Tea Bus Tour.

First of all, as always, WiFi would have been appreciated. Secondly, the seating felt a bit cramped. Bunny is a small little thing, really, but she wondered how her American cousins, for example, would have fit side-by-side on those seats…

Thirdly, a little bit more food could be on offer for gluttons such as Bunny.

And finally, here’s the thing everyone needs to be aware of before boarding the bus: there is no toilet onboard! Take care of your business before you enter the bus. There are no stops along the way either. The B Bakery Afternoon Tea Bus tour in London is a delightful, affordable and totally weather-proof thing to do on a cold winter day in London. To make it even merrier, opt for one of the tours with added Prosecco or gin cocktails.

Is Stonehenge Worth it?
Visiting world-famous monuments can be a tricky business. Your expectations are usually sky-high and the reality might turn out to[...]
Read More
Bunny’s 10 Things Not to Miss in the Lake District
Bunny recently found herself with some unexpected free time in England. When she realised that she needed an ex tempore travel plan[...]
Read More
Bunny’s Review of the Ampersand Hotel in London
The Ampersand Hotel, a late 19th century townhouse in South Kensington, is one of Bunny’s favourite boutique hotels in London.[...]
Read More