How to Visit Tulip Fields in Netherlands Without Crowds? 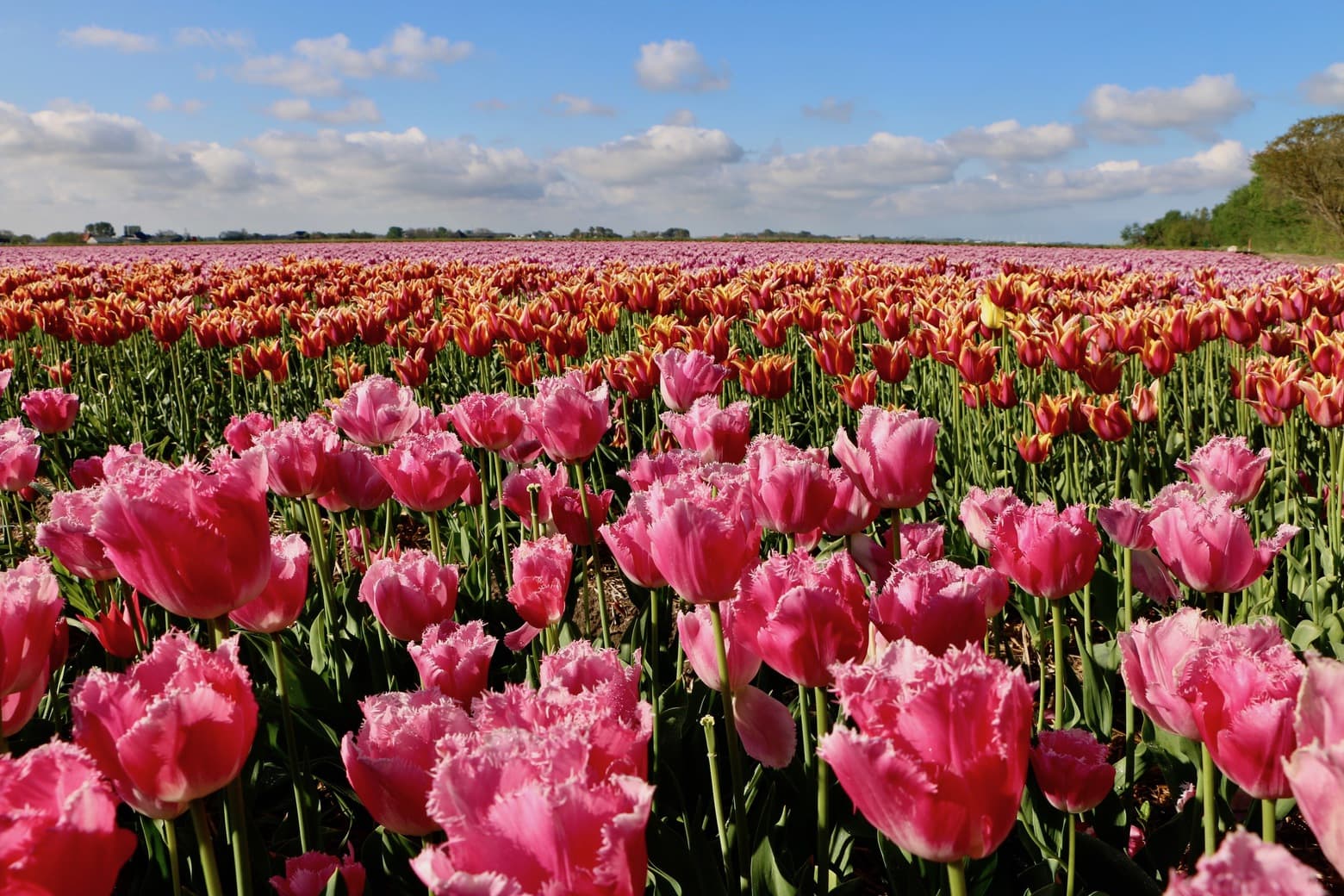 Netherlands' tulip fields are world famous. Tulips may have been originally imported from the Ottoman Empire, but today they are as integral part of the national psyche as wooden clogs, windmills and Gouda cheese.

Hordes of tourists flock the country every spring when tulip fields are blooming. Bunny is not exactly known for her love of flowers but since she happened to be in the Netherlands during the tulip season, she felt compelled to go and check out the famous fields.

The most popular tulip fields are found in Bollenstreek, the Bulb Region, in South Holland. This is also home to Keukenhof, one of the world's largest flower gardens, which attracts more than a million visitors every year.

Given her aversion to crowds, Bunny did not even consider going to Keukenhof. She is not (yet) old enough to get excited about gardens and wanted to experience a more authentic tulip growing region instead.

Read below how Bunny managed to enjoy the Netherlands' tulip fields without the crowds. 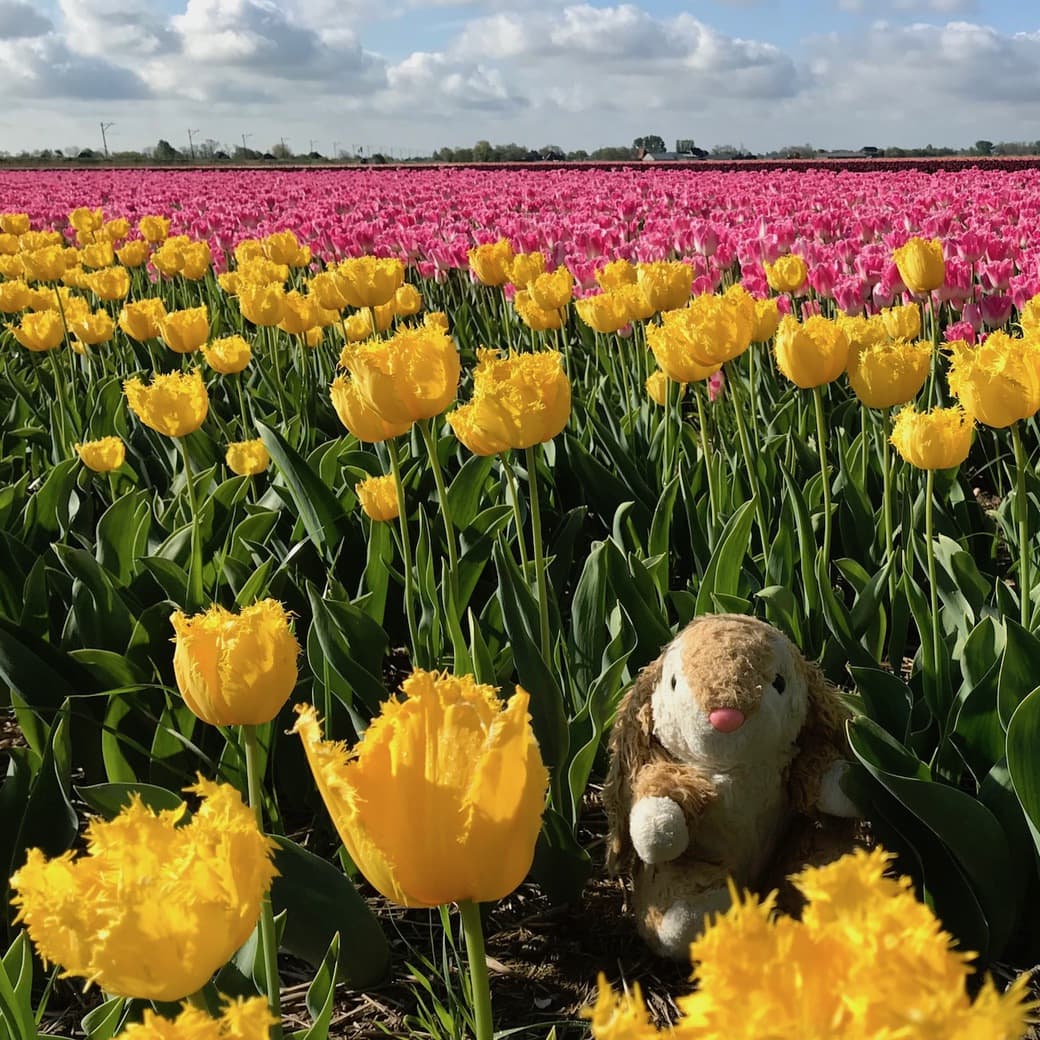 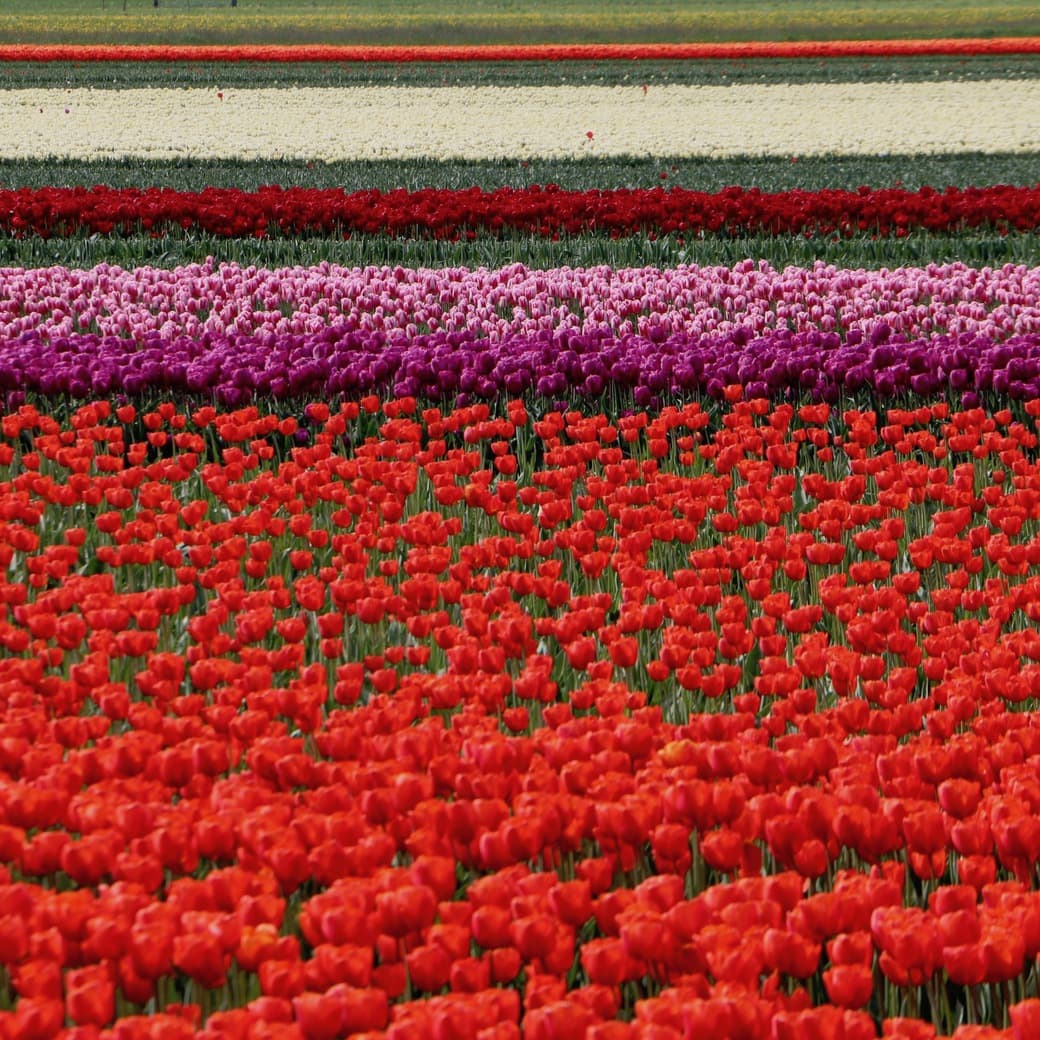 Timing your visit to see the blooming tulip fields can be a bit tricky. This is nature, after all, and it is not always predictable… The exact tulip season in Holland varies from year to year, depending on the prevailing weather.

Generally, you can expect the tulips to bloom sometime between mid-March and mid-May. Mid-April is usually the “safest” time to go.

Bunny visited at the end of April and it was almost too late! Some of the fields had already been cut and others were being cut as Bunny explored. There was still plenty to see and marvel at but, had she visited a week later, it would have been too late. 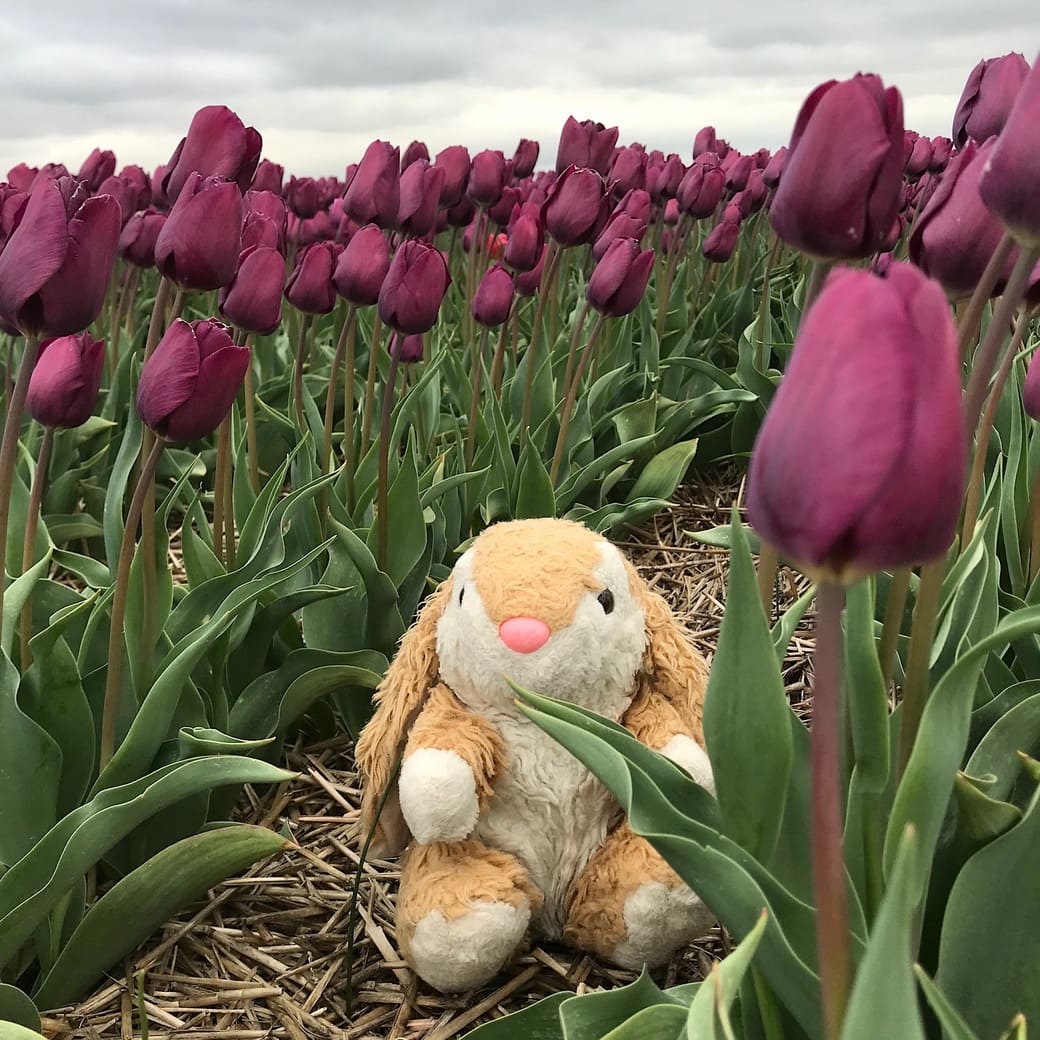 Holland exports two-thirds of the world’s flowers, many of which are tulips. Around two billion tulips are grown in the country annually.

The good news is that Holland is full of tulip fields in the spring. Bollenstreek may be the most famous, but by far not the only place in Holland to see the colourful tulip fields.

Bollenstreek is close to Amsterdam and easy to get to but the disadvantages of this busy location easily outweigh its conveniences. Who wants to visit tulip fields swarming with selfie-mad millennials and busloads of slow-walking grandmothers? Certainly not Bunny. So, she went to North Holland instead. 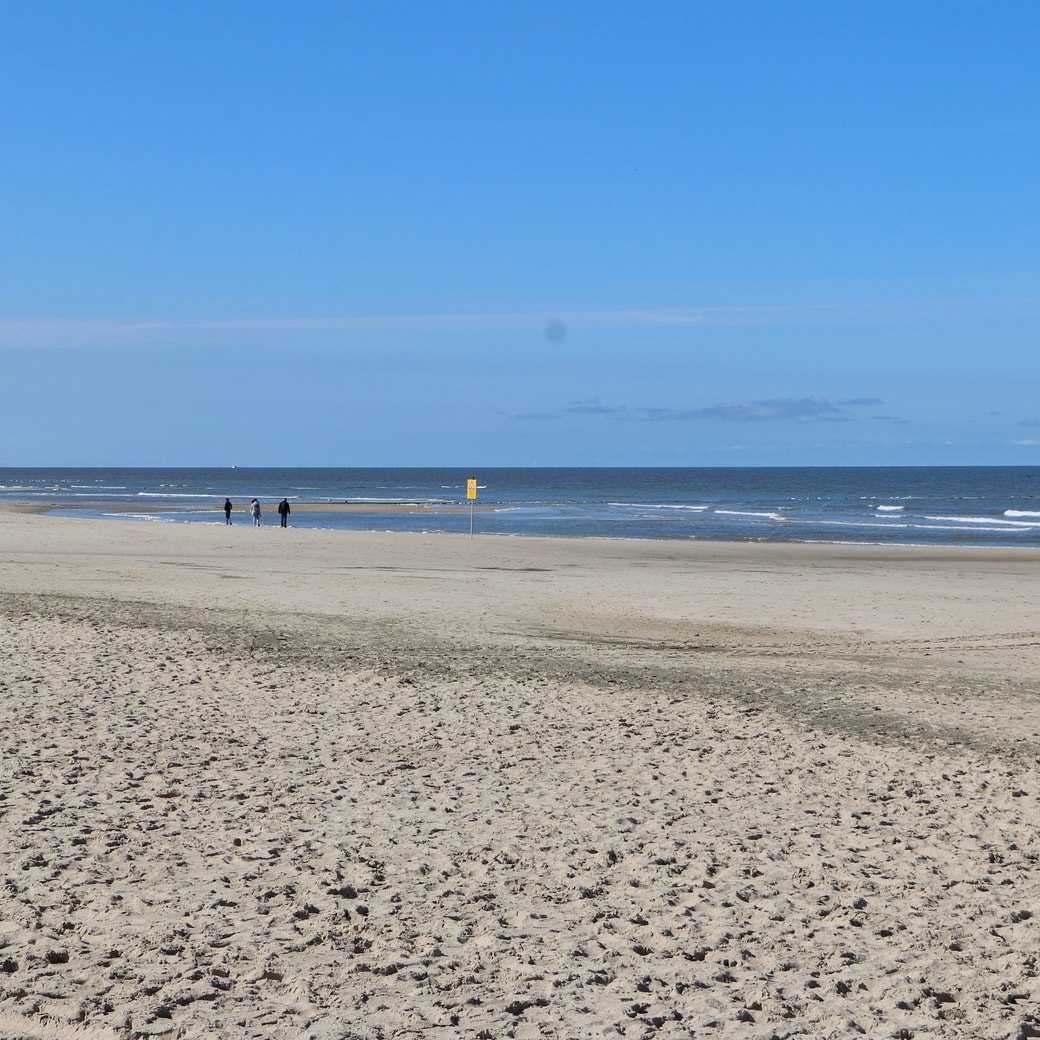 Holland is a compact little country so even going off the beaten track is not going to require a lot of your time. Bunny decided to base herself in the tiny community of Sint Maarteensbrug in North Holland. This area is close to the sea and a mere one-hour drive from Amsterdam, but safely away from the tourist hubbub.

When it comes to travel, Bunny is a meticulous planner. She travelled to North Holland equipped with a self-made map of potential tulip fields she wanted to visit during her stay. However, this detailed map got ditched during her first hours in the area.

This was because the exact location of the tulip fields varies every year. You cannot plan anything precisely so it is really just better to drive (or cycle!) around and stop at interesting locations as they reveal themselves. 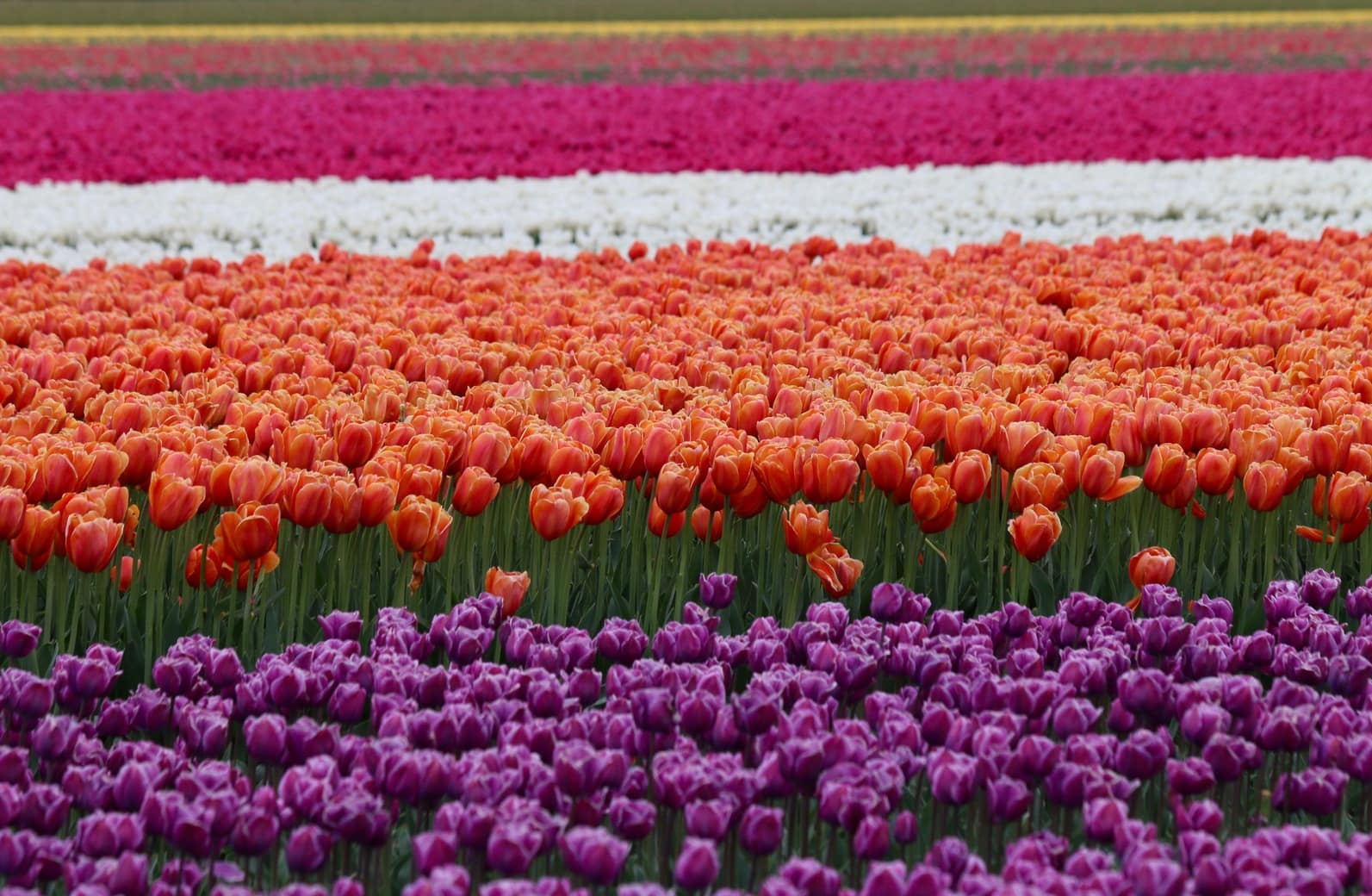 In the end, Bunny explored tulip fields in and around Sint Maarten, Sint Martenszee, Sint Martensvlotbrug, Schagerbrug, Oudesluis, ‘t Zand and Anna Paulowna. All these were tiny, quiet and charming communities firmly outside the tourist map. Only the occasional bed and breakfast sign hinted at the possibility of tourism. In other words, it was perfect.

Lack of tourists in North Holland also means that you won’t see many fences or keep out signs around the tulip fields here. You have the freedom to explore and admire the flowers in peace. That doesn't mean you should go trampling in the middle of the fields though! Be respectful of other people’s property, Bunny says. 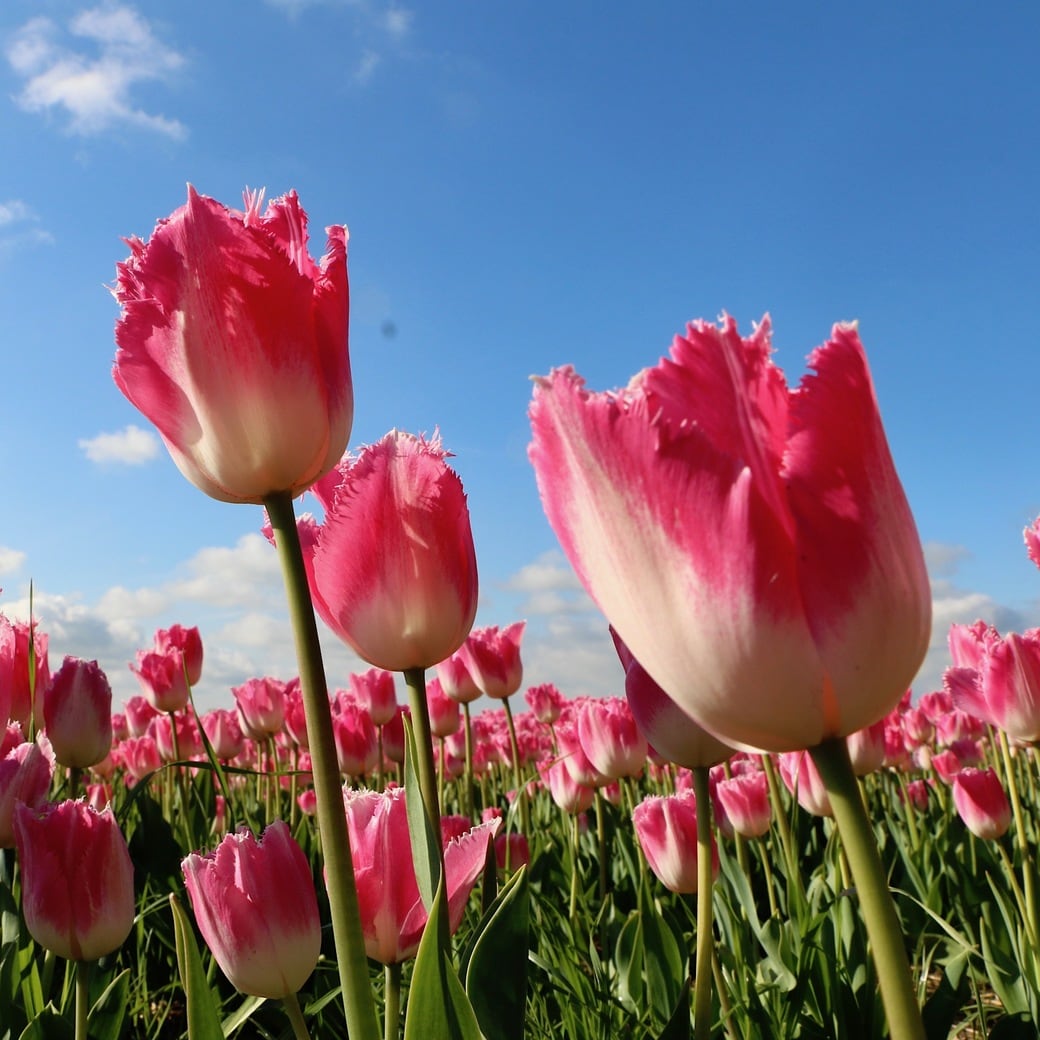 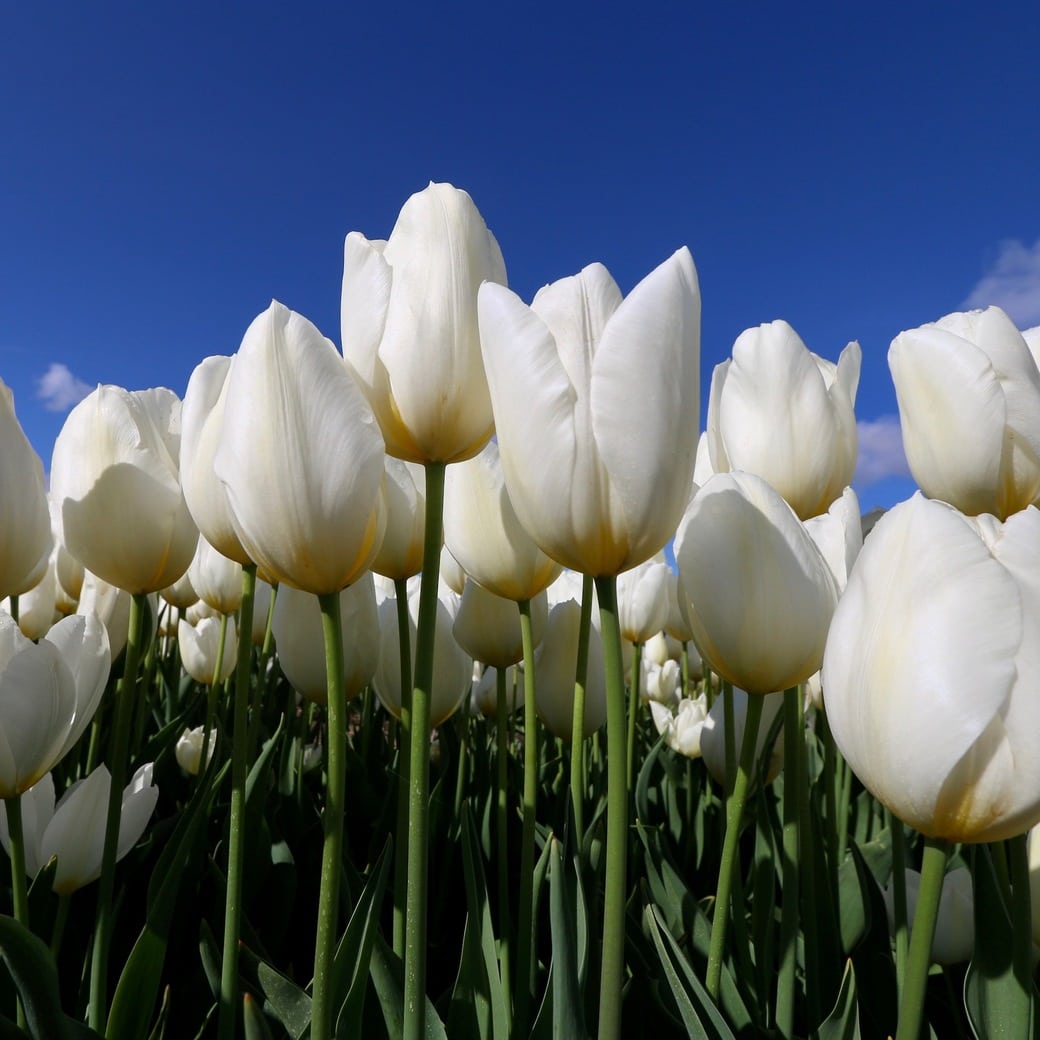 Visiting the relatively quiet North Holland means that you can avoid the inflated hotel prices of the popular Bulb Region. Instead, you can choose from charming and affordable guest houses and Airbnb accommodation in small villages. 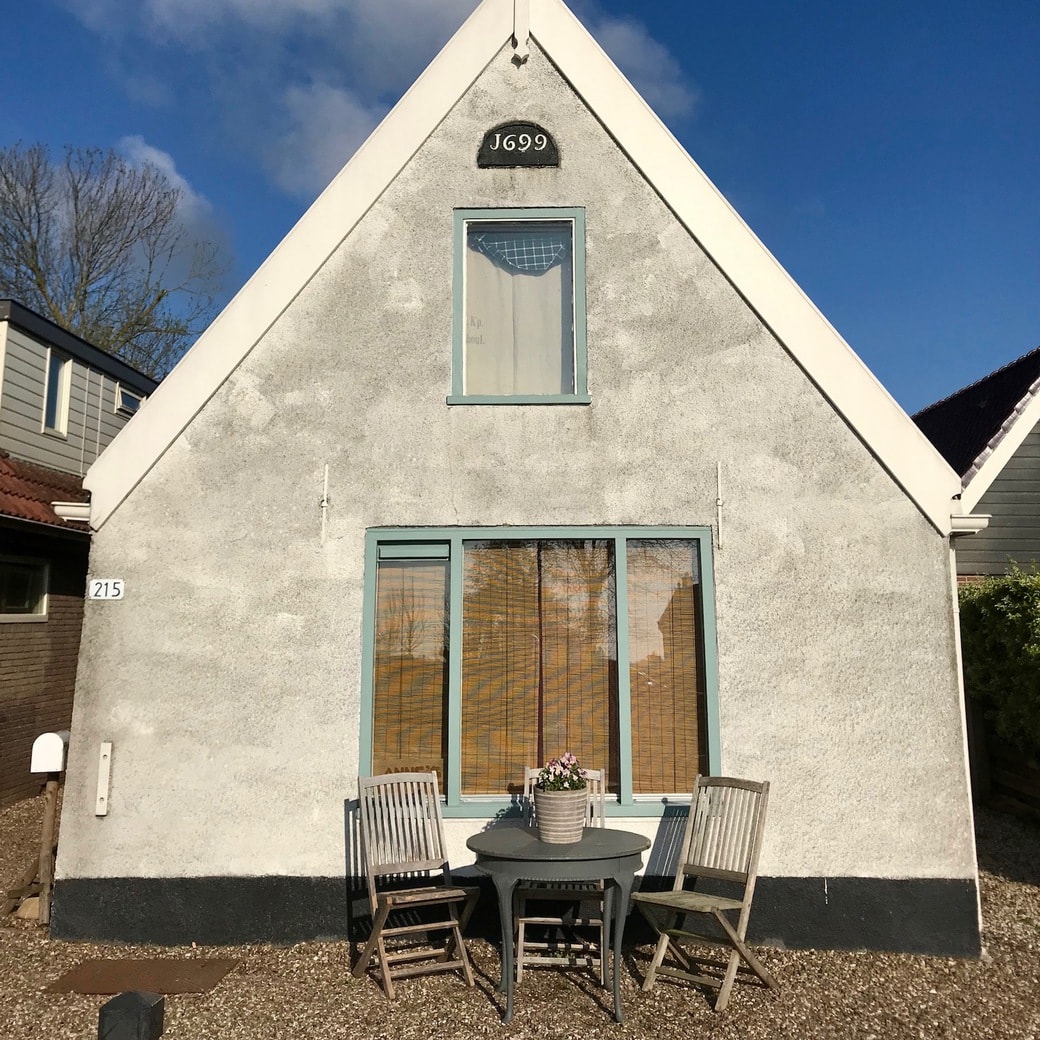 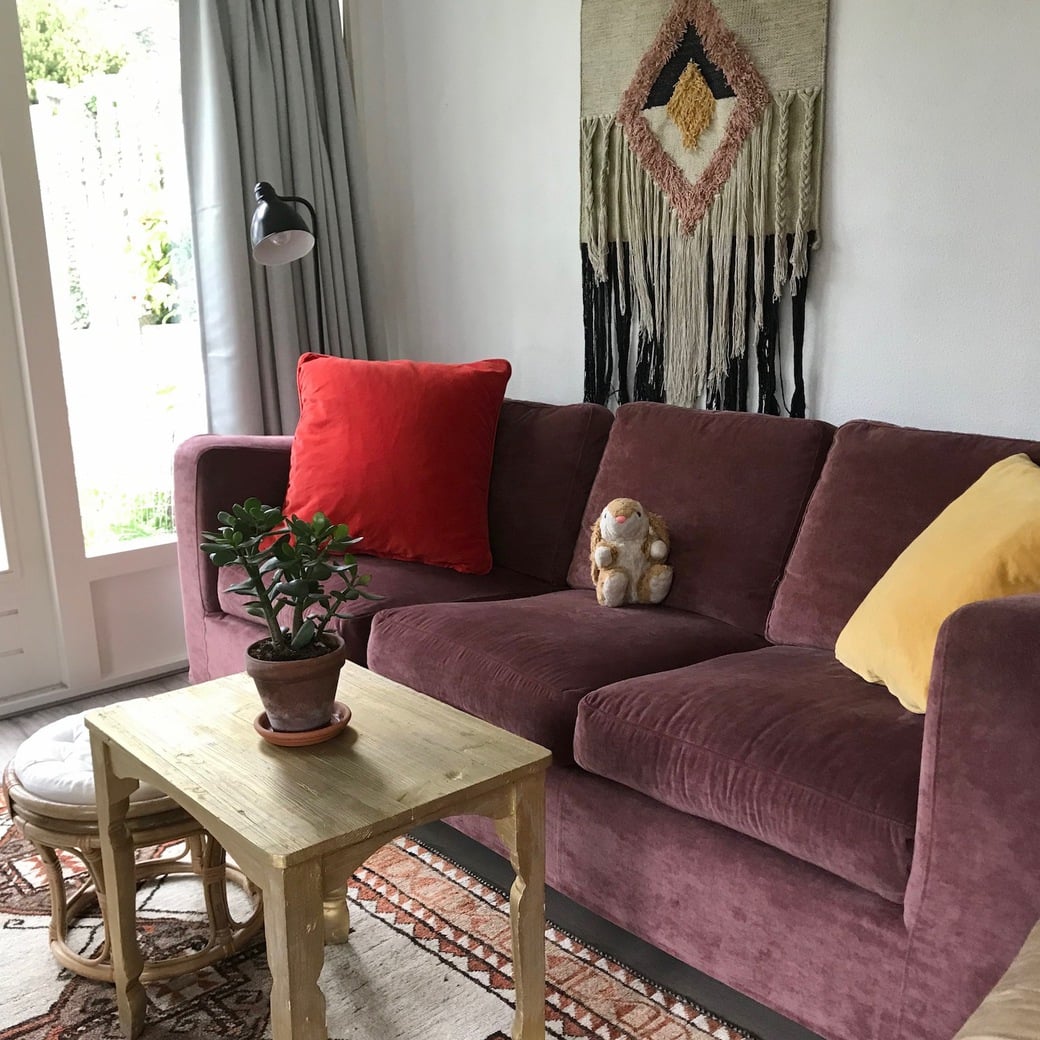 Bunny stayed at Anne’s Cottage in Sint Maarteensbrug. This Airbnb gem is an absolutely delightful little cottage attached to the owner’s house. There is total privacy, all the modern conveniences, a stylish interior and cute little touches that pleased even the eye of the ever-critical Mr. Bunny. And as if the cottage wasn’t cute enough, there were two sweet bunnies living in a large enclosure in the backyard!

Anne’s Cottage comes with two bicycles that the guests can use which is handy as the closest tulip fields are a very short bike ride away. The surrounding countryside is quintessential Holland with picturesque canals, windmills and traditional houses. Even the beach is only a few kilometres away. 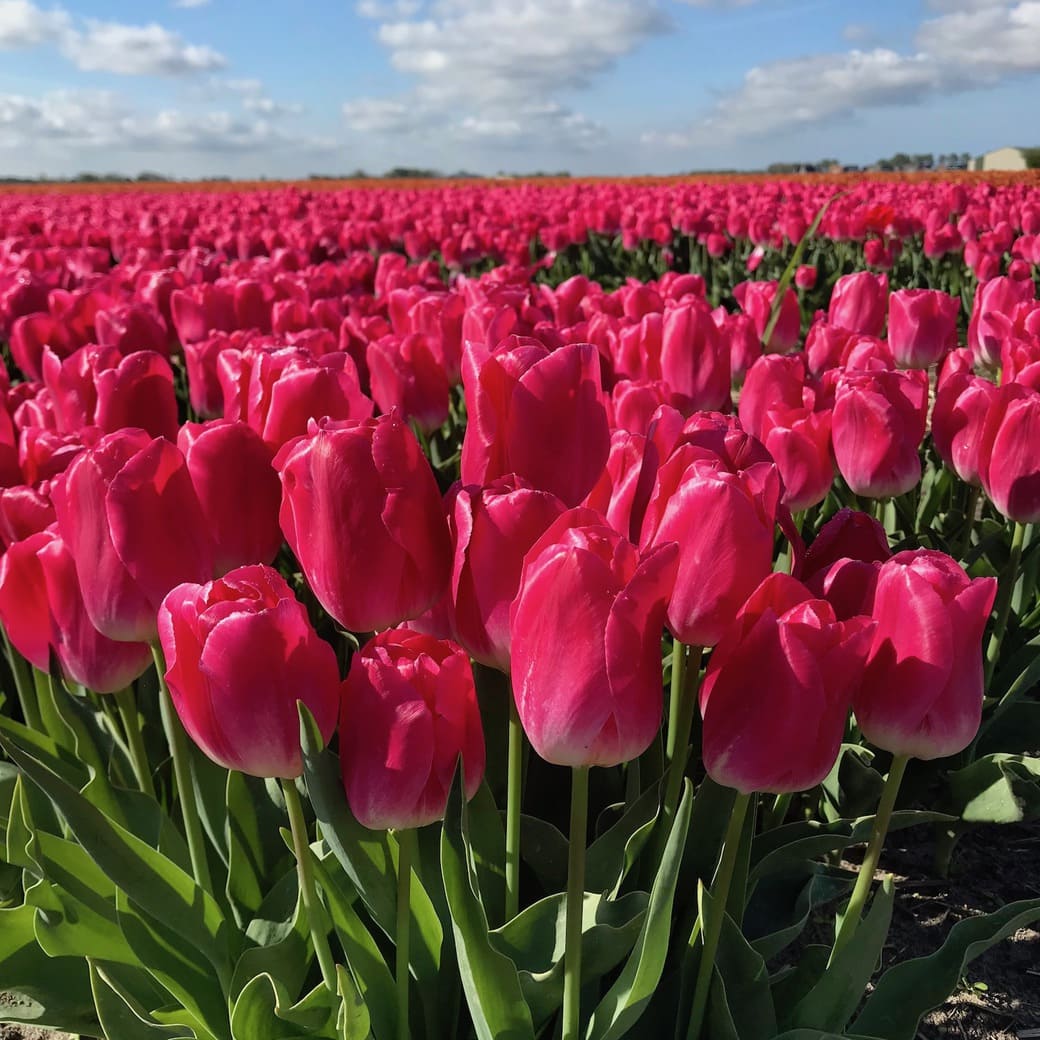 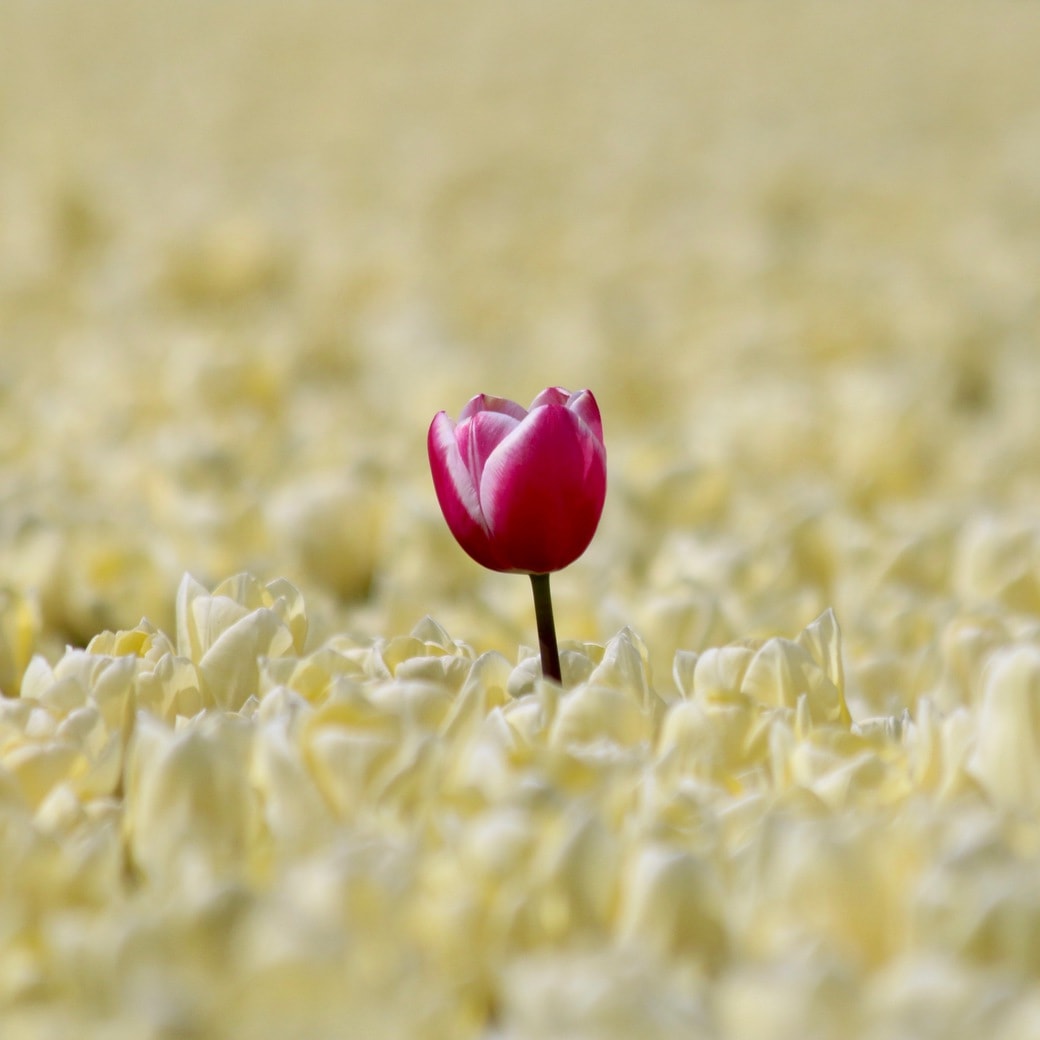 Surprisingly, Bunny didn’t have a long checklist of things to see and do during her short break in North Holland. Mainly, she just wanted to experience the tulip fields and hop around the countryside. 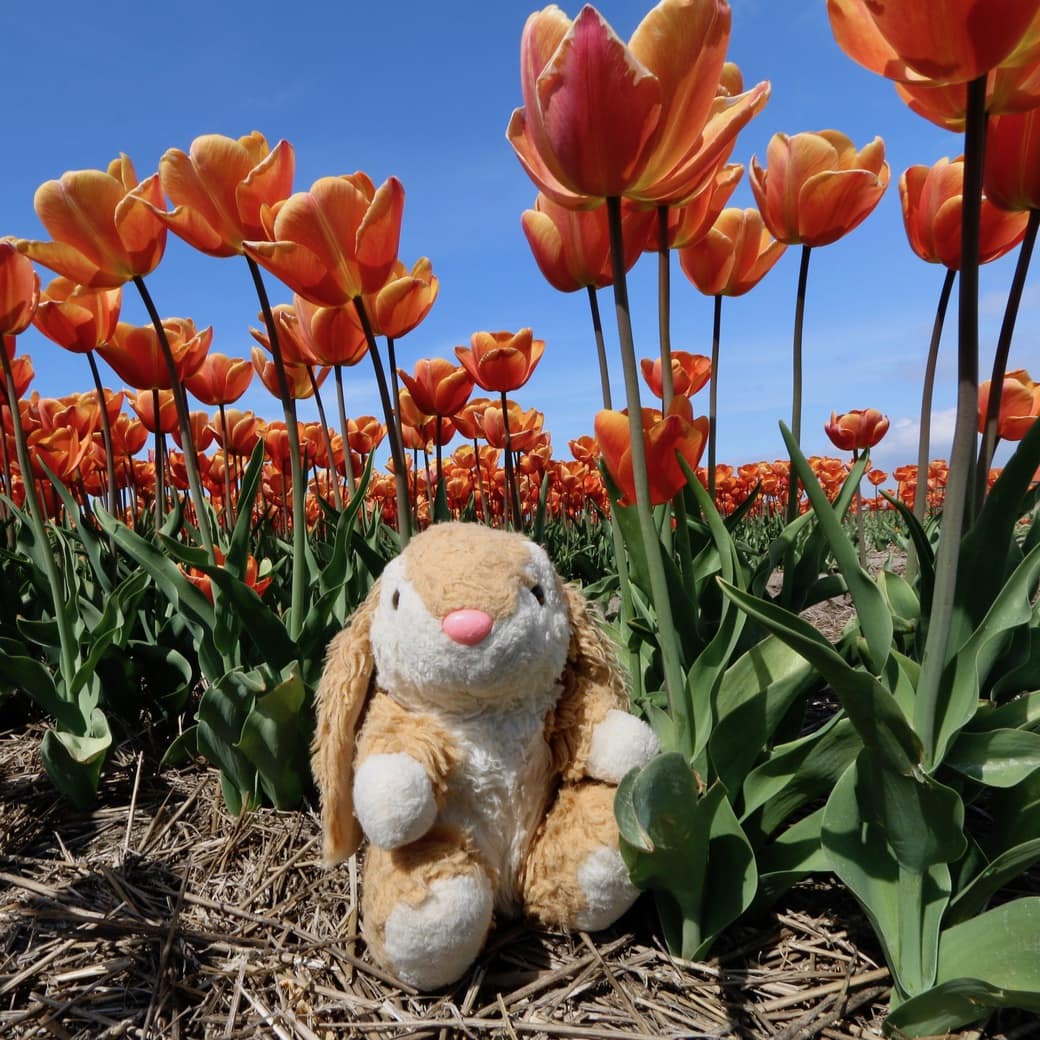 To move around effortlessly, it is quite essential to have a car here - unless you are a cycling maniac. Bunny does enjoy cycling and was happy to bike around the area, particularly on a sunny day, but was also grateful for the rental car when she ventured further afield.

North Holland is known for its sand dunes and beaches but April was a bit too chilly for Bunny to go swimming in the sea. However, she did check the coastline and also made a short detour to scenic Hoorn further East. The famous cheese town of Alkmaar was also close by. 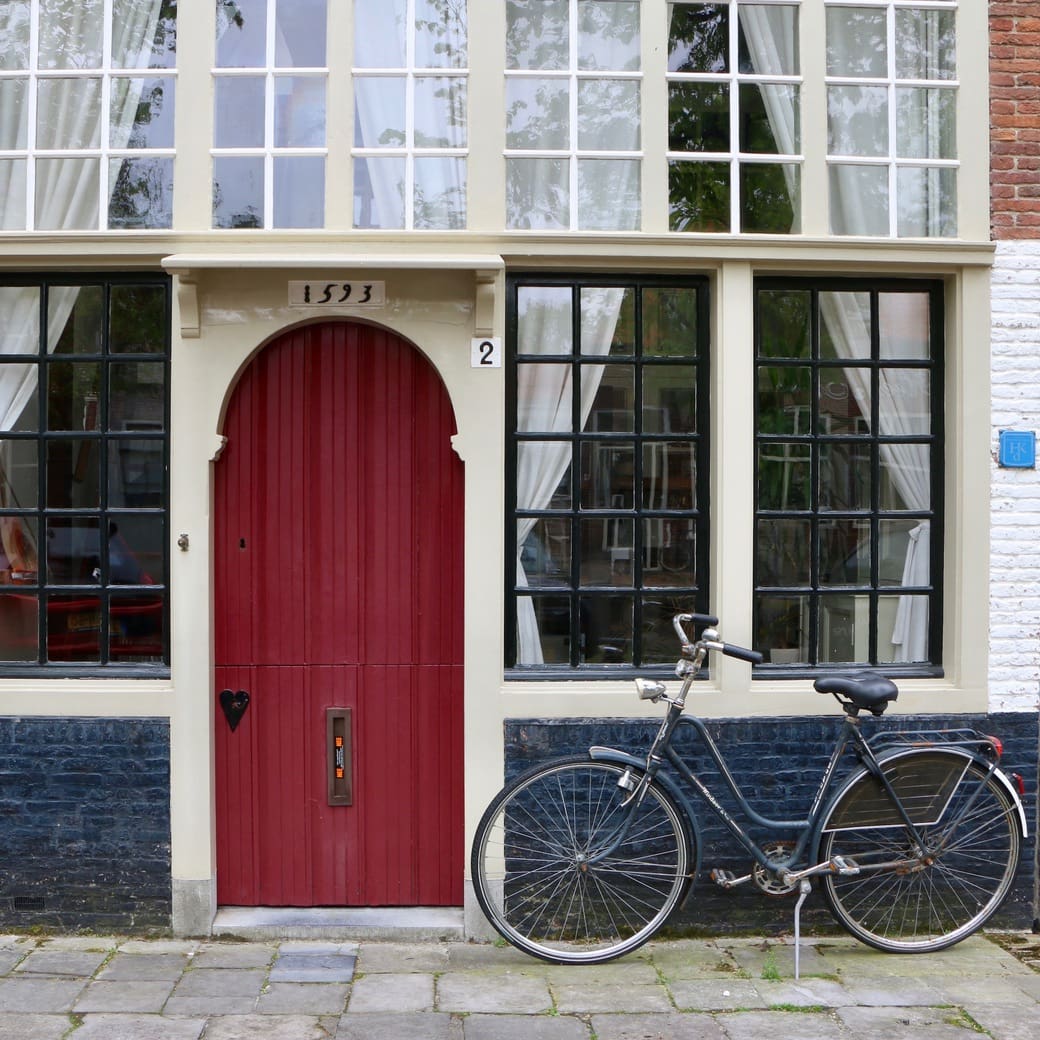 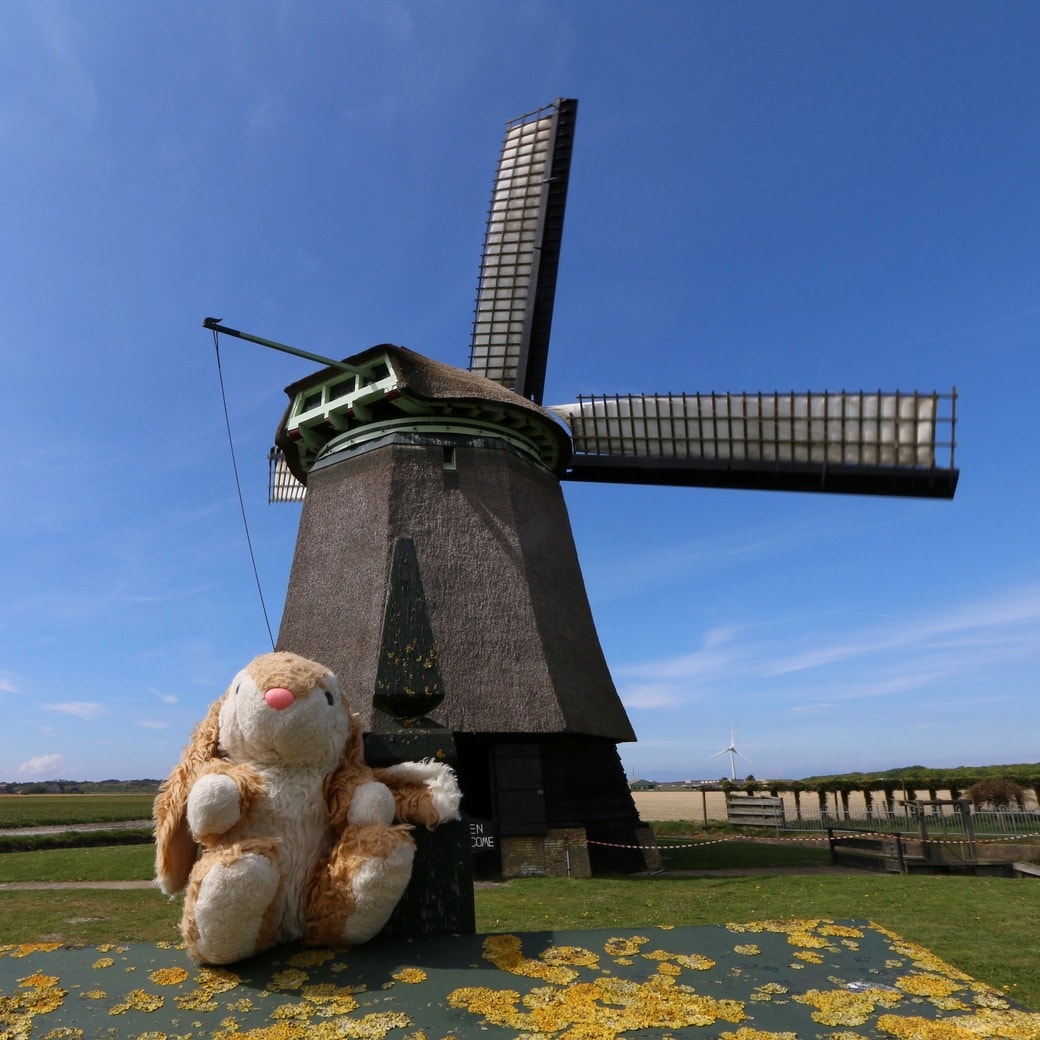 If you want to enjoy the famous tulip fields in the Netherlands without the crowds, this is easily achieved by going north.

In North Holland, you can tour and photograph the tulip fields to your heart’s content without having to elbow a busload of tourists whilst doing so. There is peace and quiet, endless tulip fields blooming in a rainbow of colours, windmills, canals, quaint little villages and, if you’re lucky, even some sunshine to enjoy. 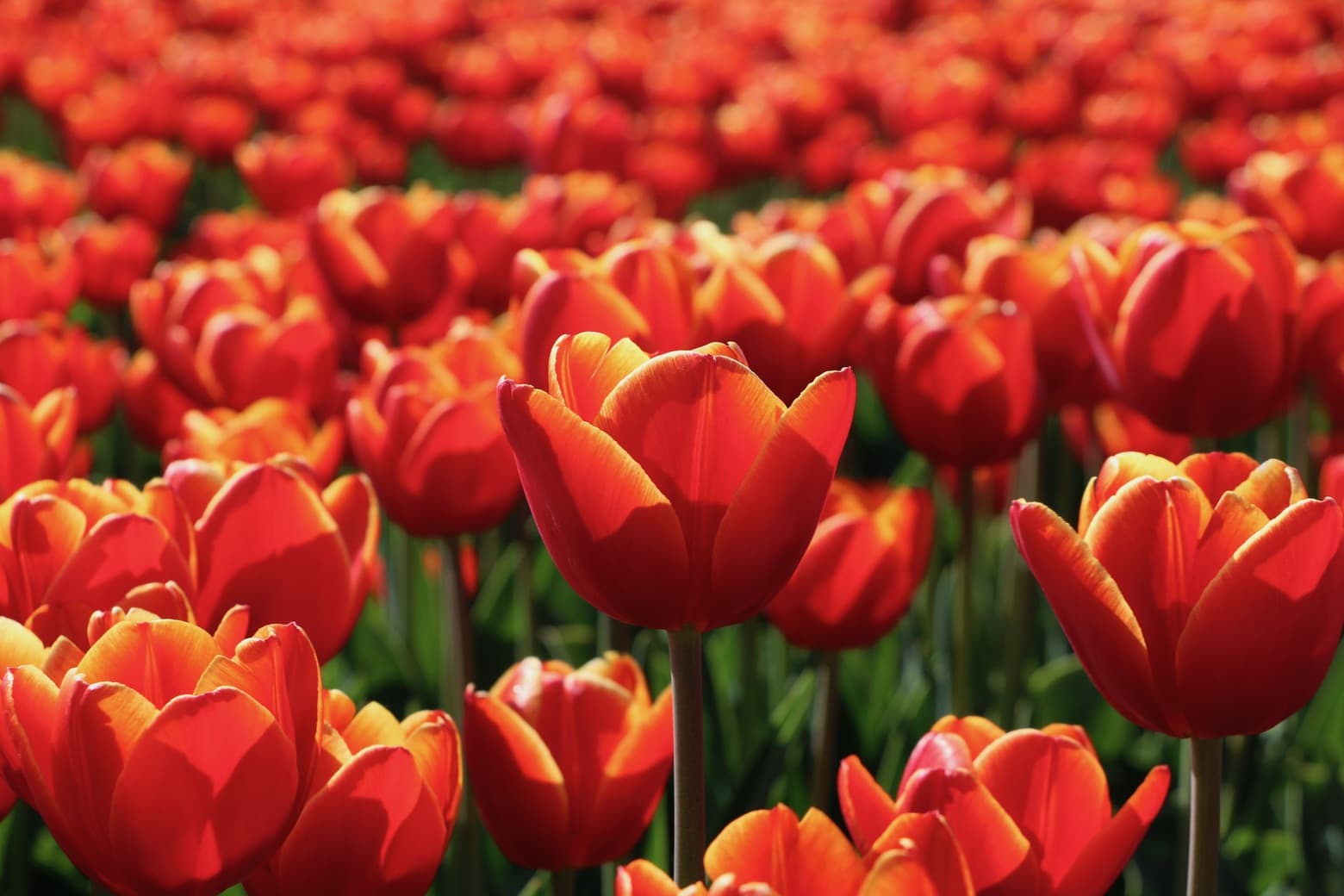 What to Do in Vienna on a Sunny Day?
Bunny is not in favour of spending hot summer days in the city, but sometimes you have no choice. If[...]
Read More
Montreux and Annecy: Easy Day Trips from Geneva
Geneva Is Boring... Bunny recently found herself in Geneva without much of an agenda for a couple of days. Now Geneva[...]
Read More
B Bakery Afternoon Bus Tour – Bunny Combines High Tea and London Sights
Bunny is a huge fan of the afternoon tea concept. She just cannot resist the old world charm and allure[...]
Read More