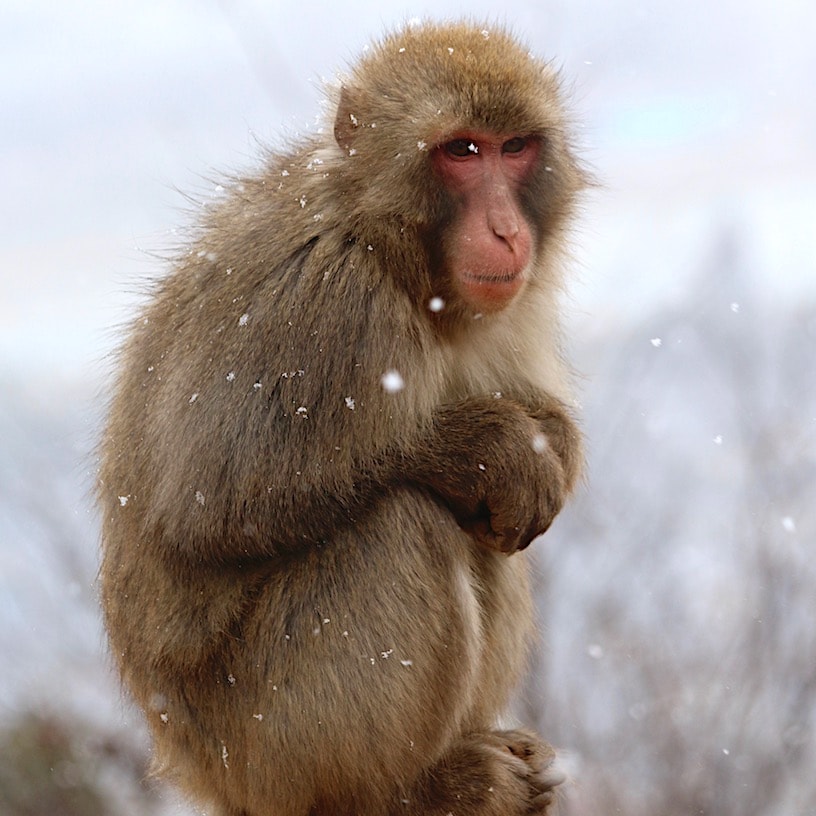 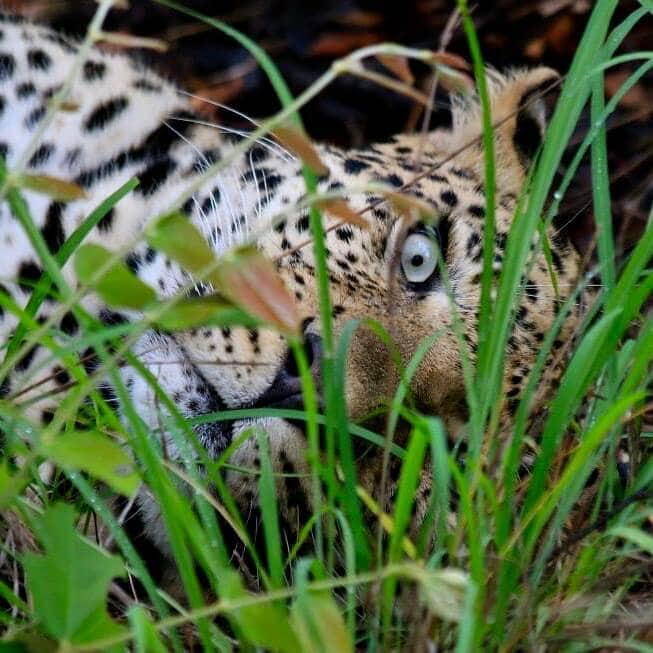 There is nothing more thrilling than witnessing wildlife during your travels. No sort of luxury, big city thrill, Disney experience, or even being on stage with Metallica will come close to the best wildlife encounters in the world, Bunny says.

So it is not surprising that many of Bunny’s all-time favourite travel experiences have revolved around wildlife encounters.

In Malaysia, Bunny had the rare opportunity to witness a green turtle lay eggs at night in the Turtle Island Park of Selingan. Sabah, Malaysia is also where Bunny spotted wild orangutans up in the trees while traveling downstream by small river boat. She also has very fond memories of observing a curious puffin colony in Iceland, gawking at adorable penguins at Boulders Beach in South Africa and admiring colourful toucans in Belize. 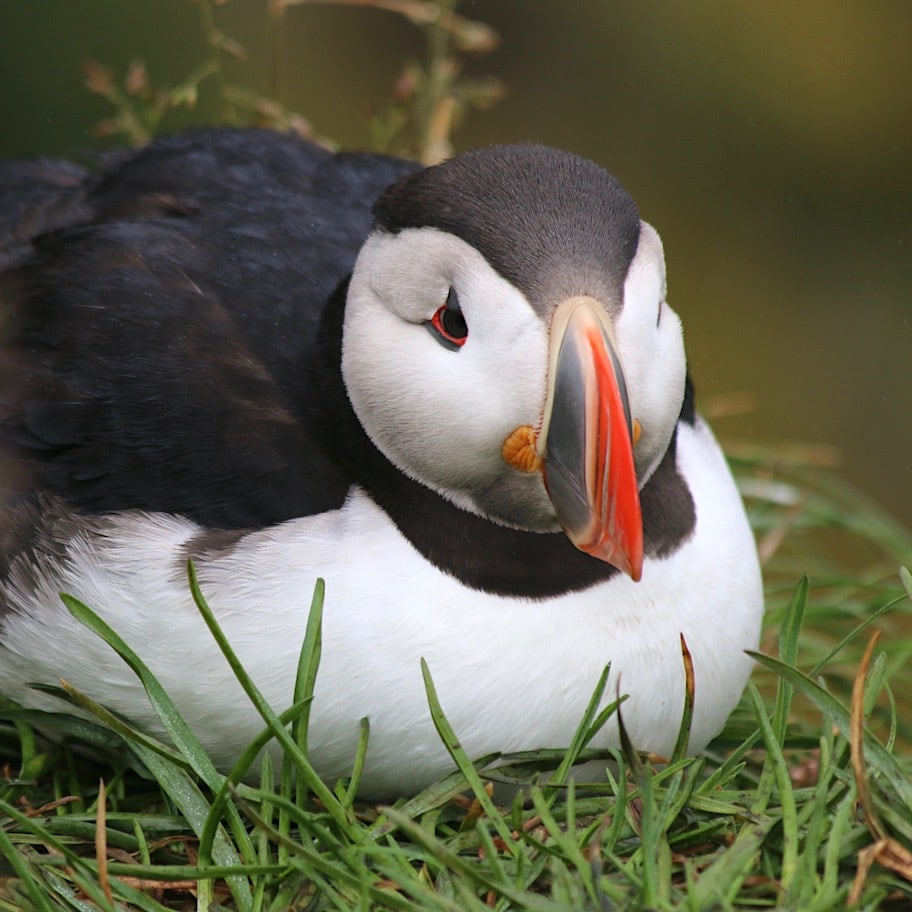 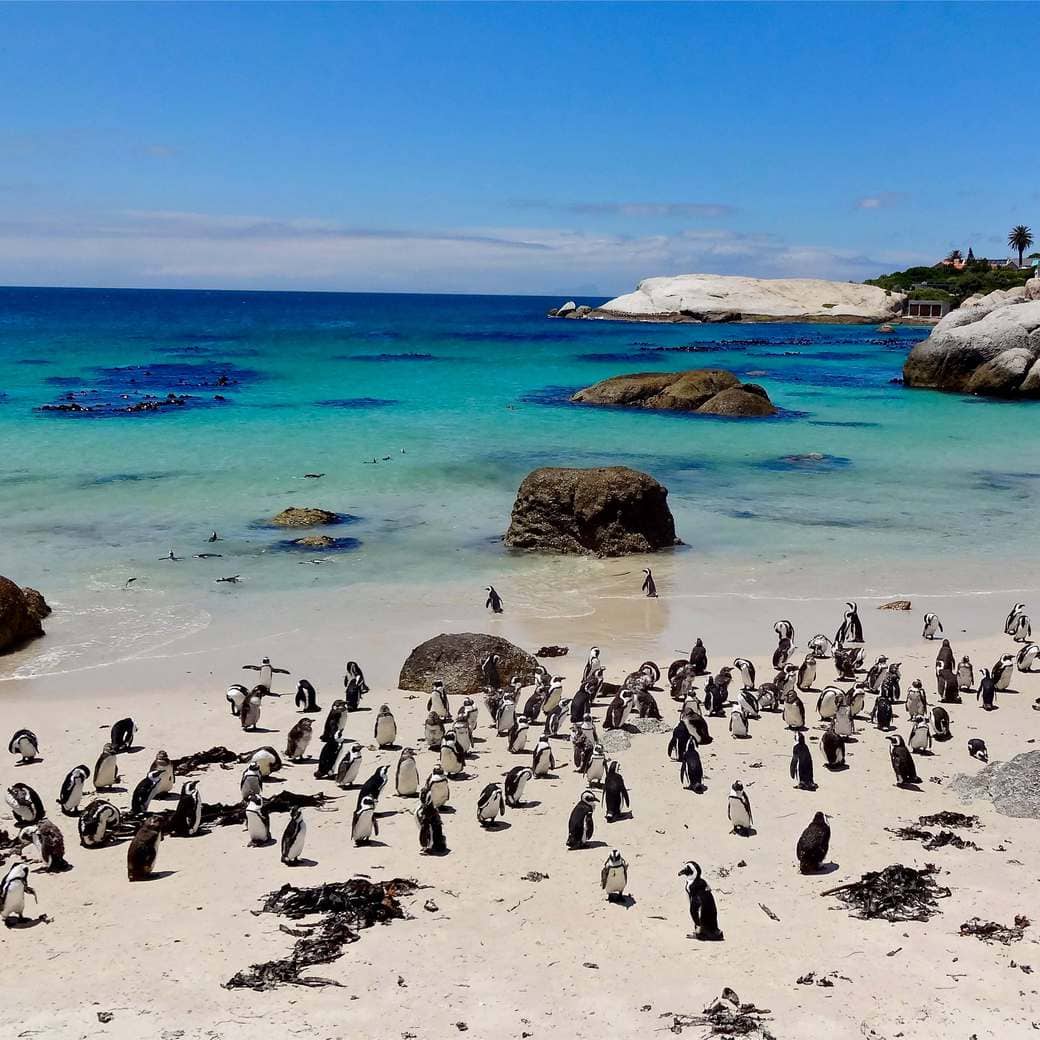 Kayaking among hippos on the Zambezi river in Zimbabwe is another wildlife highlight for Bunny as well as meeting giant tortoises in the Seychelles and swimming with reef sharks in the Maldives.

These were all amazing experiences but they didn’t quite make it to Bunny’s Top 5 wildlife experiences around the world. Read below which encounters did.

Let’s start with the most important thing: you should never interfere with wildlife. Feeding, touching or holding wild animals is an absolute no-no, Bunny says.

Bunny never visits zoos, circuses, aquariums or any other establishments where wildlife is being held captive for profit. That also means a firm no to swimming with dolphins, posing with tigers, riding elephants, or taking selfies with captive monkeys, snakes, birds or any other wildlife. 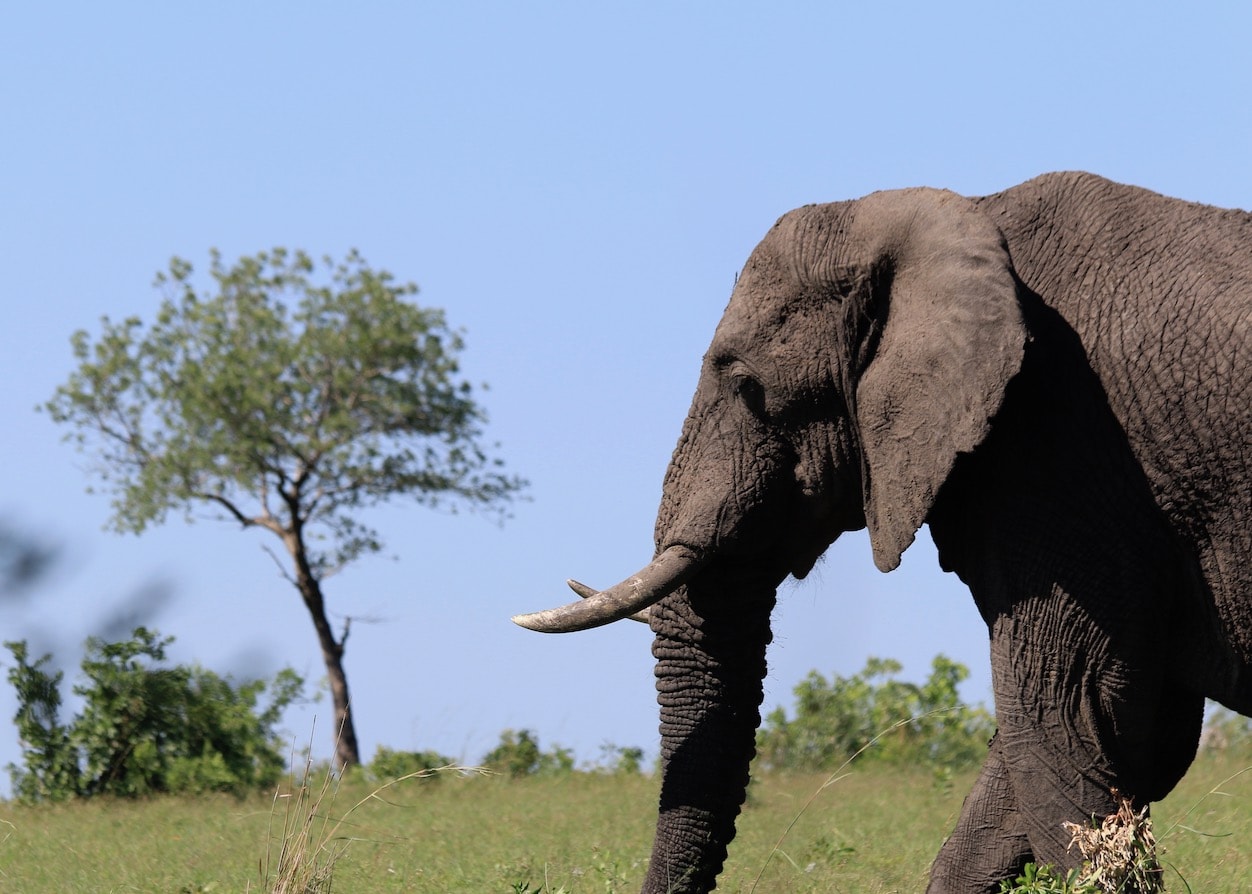 Apparently, around 110 million people visit cruel wildlife attractions every year. That makes Bunny very sad. She wishes humans were more educated and aware of the problems endemic to the wildlife entertainment business.

Wild animals belong in the wild. It’s as simple as that. If you want to see them, you will have to travel to their natural habitat, use a responsible travel company, be patient, be respectful and admire them from afar. End of lecture.

Mountain gorillas share more than 98% of human DNA. Yes, by this measure they are 2% short of being human - and yet humans have done their very best to drive these remarkable creatures into extinction. Today, there are only about 1,000 mountain gorillas left in the world, living in the high and dense mountain forests of Uganda, Rwanda and the Democratic Republic of Congo in Africa.

To be able to see mountain gorillas, you will have to travel to these remote locations, obtain a special permit (not cheap!) and be prepared to trek. Sightings of these gentle giants are never guaranteed - this is wildlife after all - but in practice almost everyone in possession of a trekking permit will get to see the gorillas in the wild. You’d have to be very unlucky indeed to miss them. The guided trekking portion of the visit will take anywhere between 5 minutes and 8 hours, depending on the day and the mood of the gorillas. 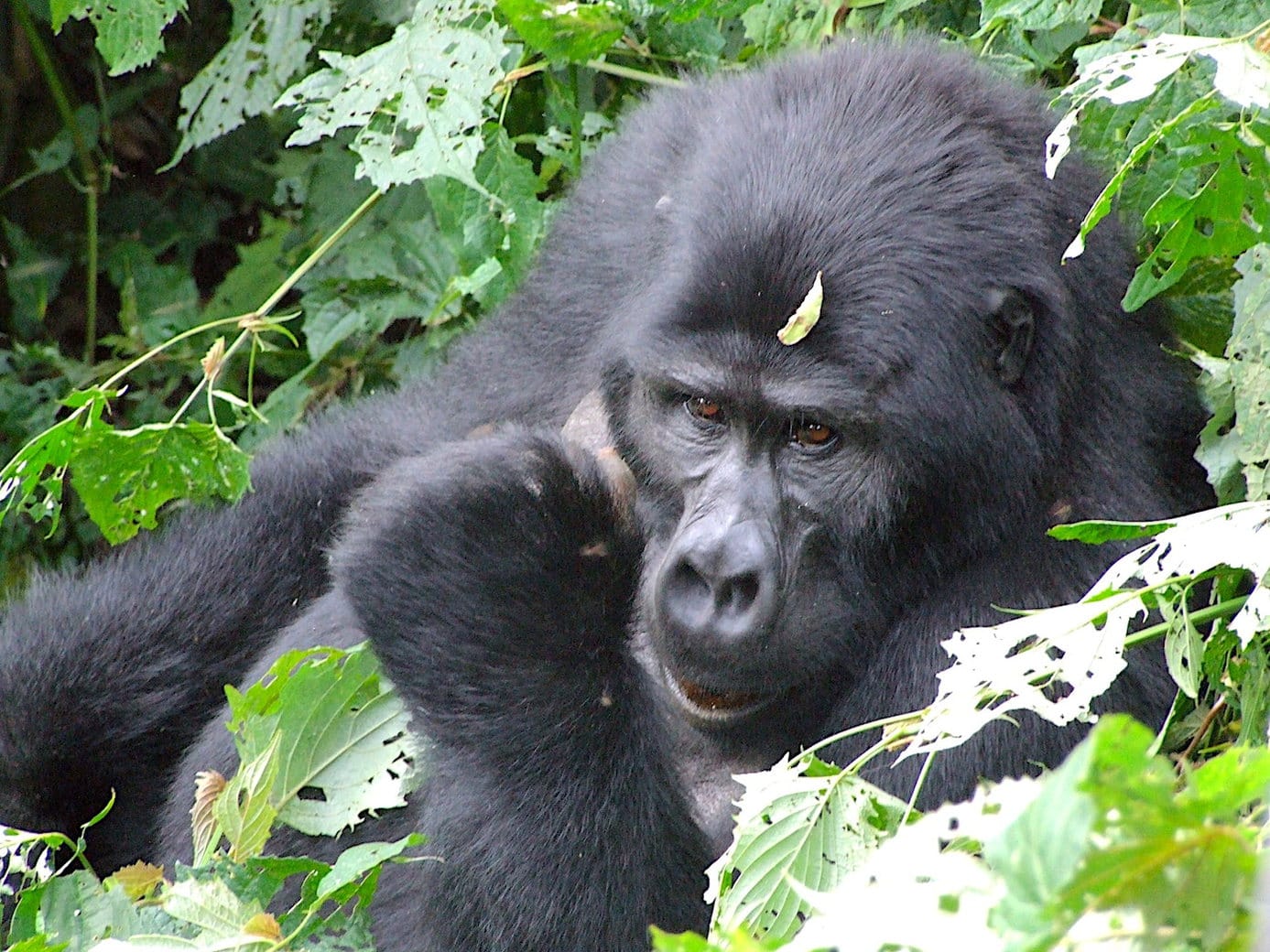 Once your group (maximum 8 people) reaches the gorilla troop, you are allowed to stay and observe them for an hour. This is absolutely magical. You are mere feet away from the troop which usually contains at least one silverback, an older male who acts as the leader, and most probably some adorable infants as well.

You can literally just sit back and enjoy the sight of the troop going about their daily business, munching on the green foliage and scratching each others’ backs. Some of them might even approach you! You are required to stay quiet, move very slowly and avoid eye contact with the gorillas. Taking photos is allowed but the use of flash is forbidden. The encounter is enthralling but perfectly safe, as long as the gorillas stay relaxed and comfortable.

Seeing the gorillas in the wild is truly an unforgettable experience, Bunny says. She saw the mountain gorillas at Bwindi Forest National Park in Uganda as part of her longer tour of the country and loved every minute of it. And now she is dreaming of repeating the experience in Rwanda one day… 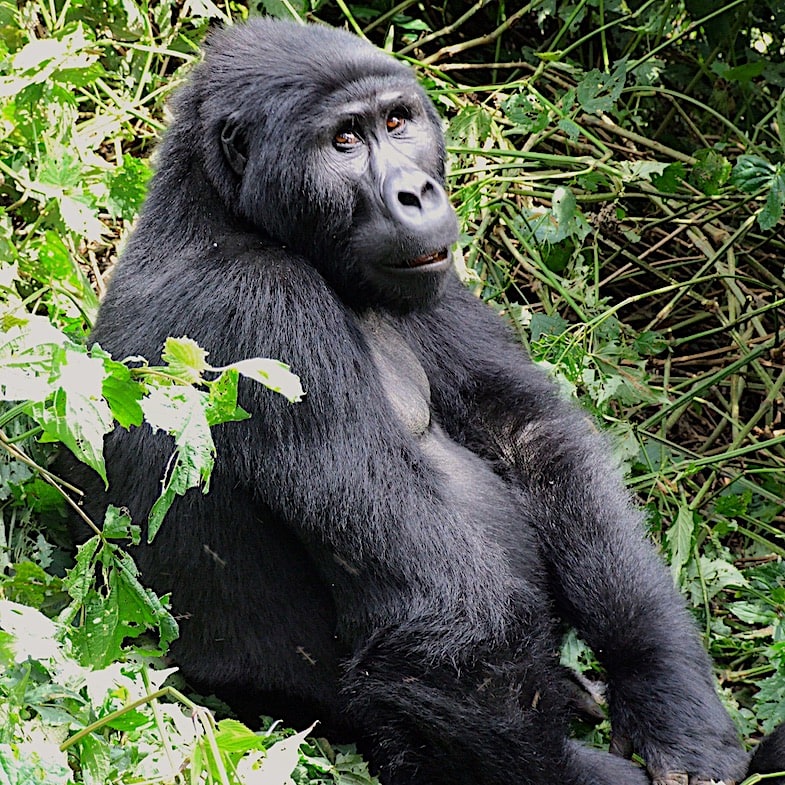 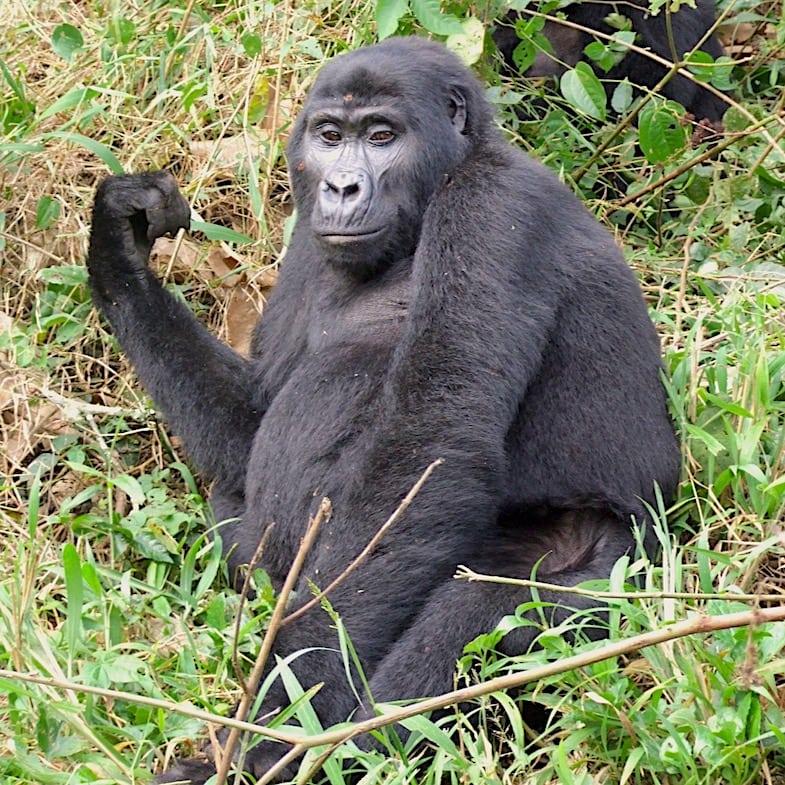 Going on a wildlife safari in search of the “Big Five” in Africa is probably the one thing Bunny would recommend to anyone as an experience. It is simply mind-blowing.

Bunny has experienced safaris in Kenya, Zambia, Zimbabwe, Uganda, Botswana and South Africa. The wildlife sightings on Bunny’s trip were excellent, including lions, elephants, buffalos, leopards, rhinos, cheetah, hippos, giraffes, zebras, hyenas, wild dogs, warthogs, wildebeests, and many, many more. If you choose your place and time right, you can really feel like you were inside an excellent nature documentary. The only thing missing is the distinctive voice of David Attenborough… 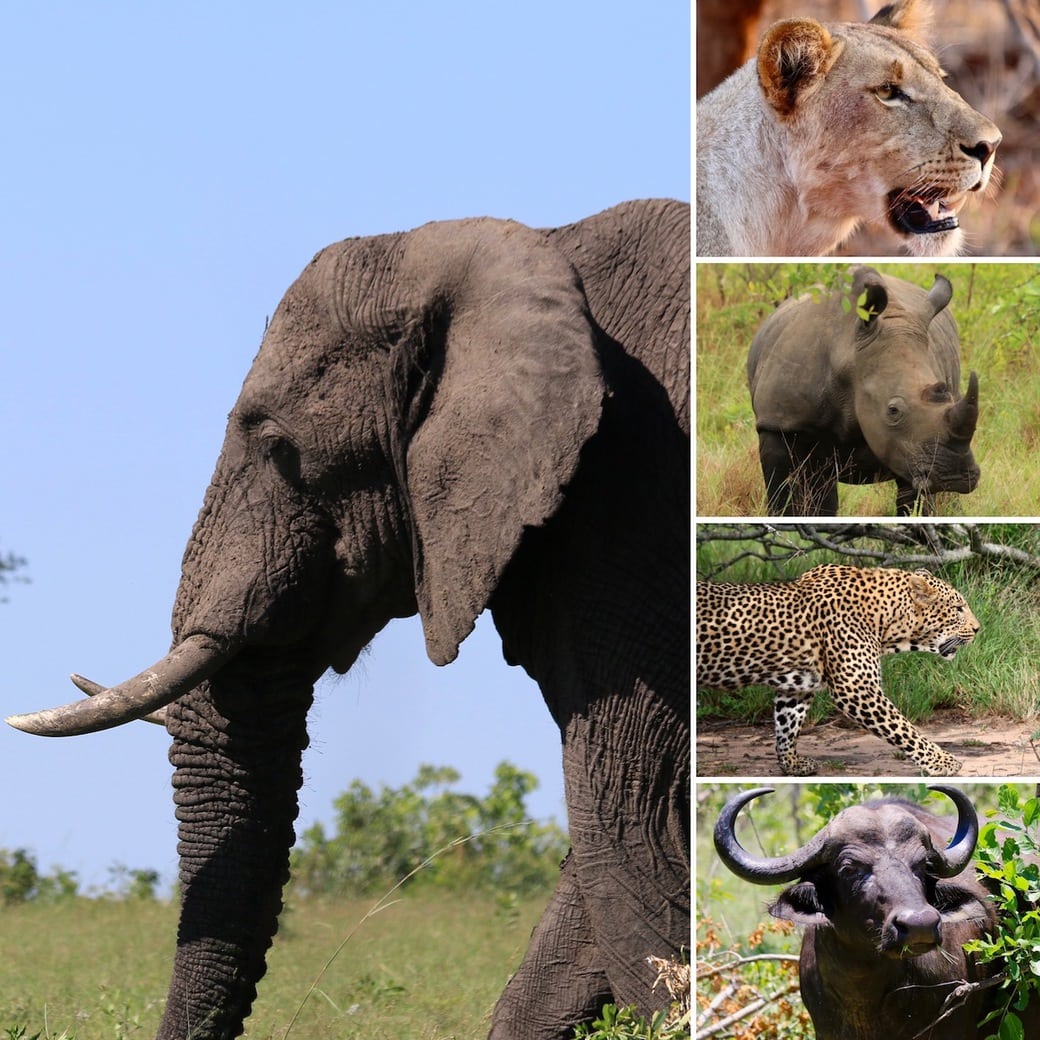 One of the most remarkable safaris Bunny has ever done was in the Sabi Sands Private Game Reserve in South Africa. There was an abundance of encounters with the elusive leopard, a pride of lions gorging on a day-old rhino carcass, a herd of elephants happening upon the Bunnies while lounging in their suite’s backyard pool and the memorable gaze of graceful giraffes peeking through tall trees in the early morning sunlight. There were also tiny warthogs nursing on their mother in the middle of the road and a couple of near-extinct rhinos hiding in the bush during a late afternoon game drive. 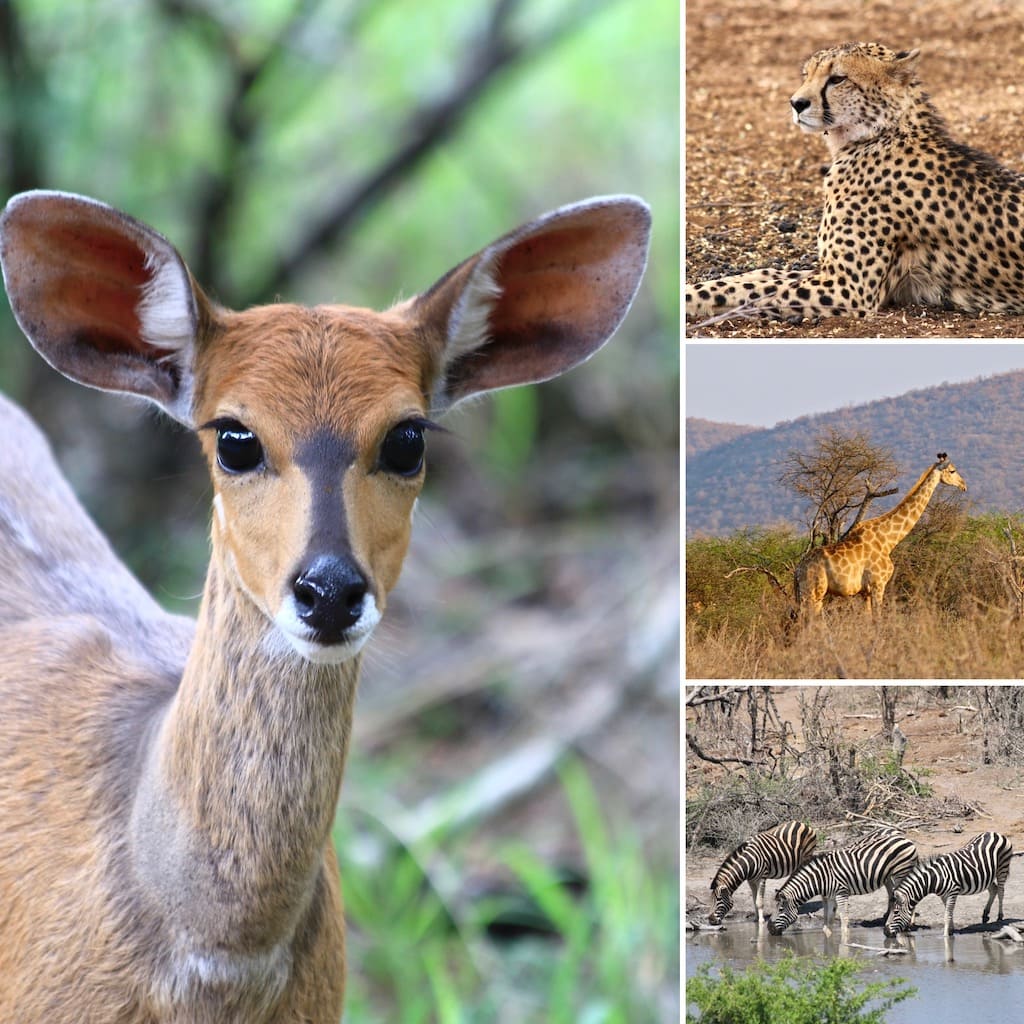 The wildlife was ubiquitous, majestic and fragile at the same time. The game drives and the guides were all topnotch and the overall experience of staying in a luxury lodge was one to cherish.

A great lodging is an integral part of a fabulous safari experience. Bunny divided her time in Sabi Sands between two lodges, Dulini and Savanna Lodge. She stayed in fabulous suites and was pampered and plied with delicious food and drinks from dusk until dawn, whilst observing the most amazing and intimate wildlife moments in the world. Truly unforgettable. 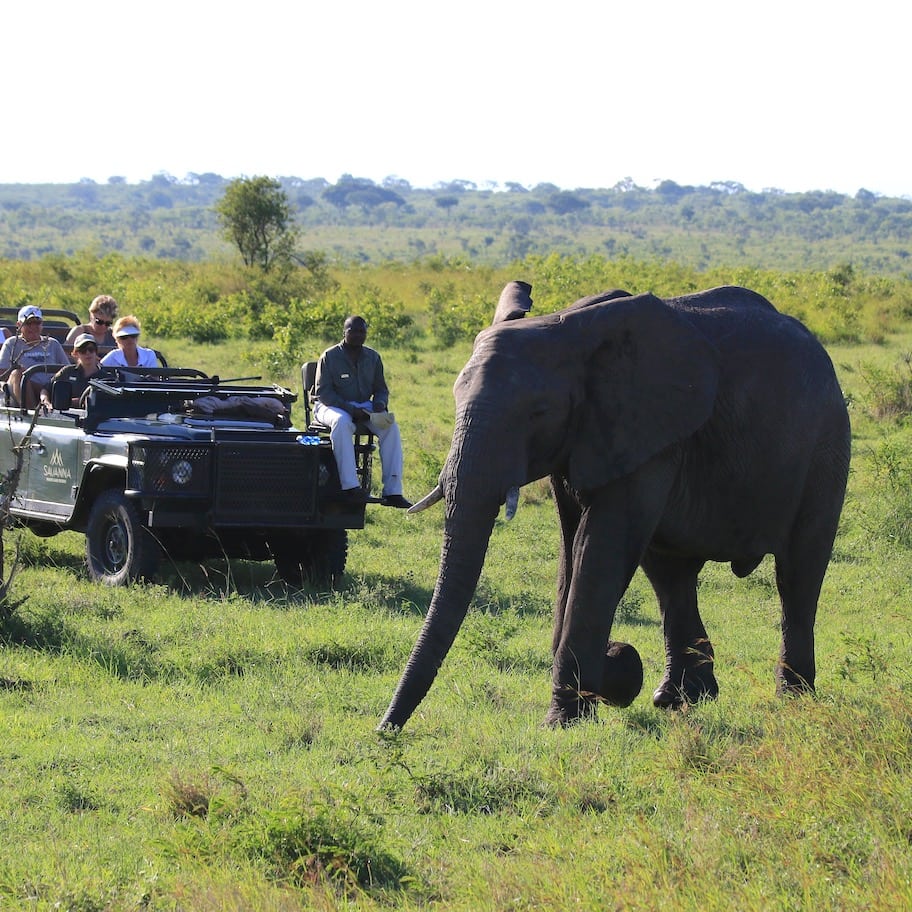 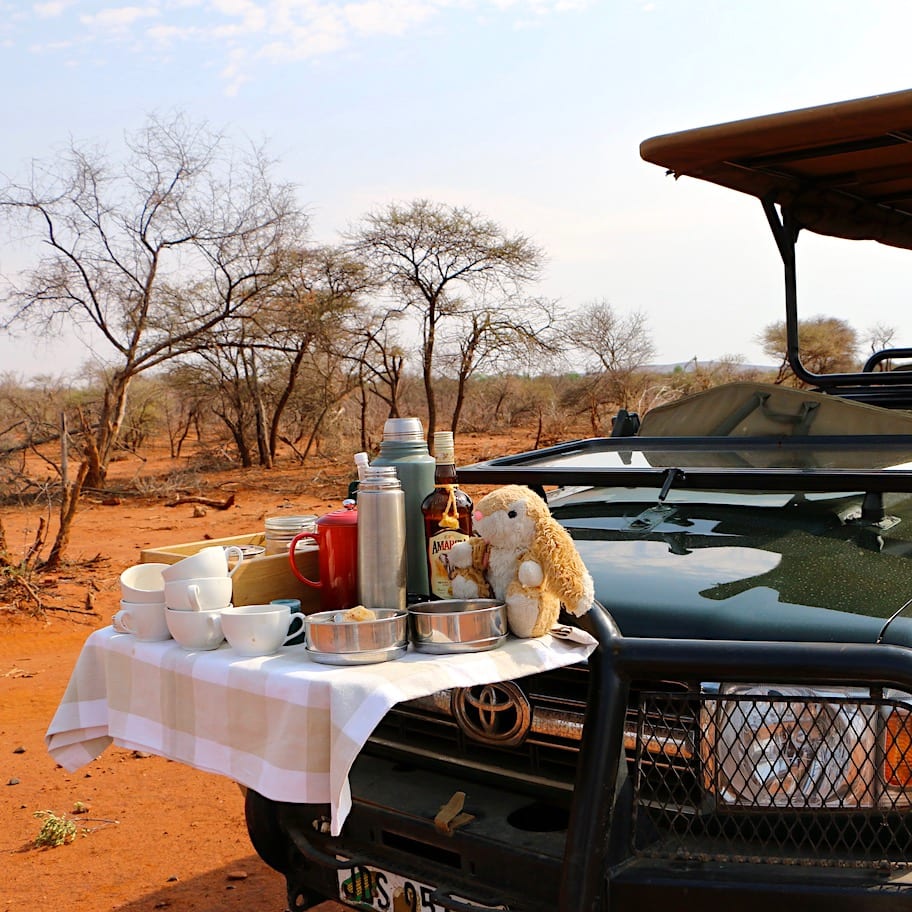 Samana Bay in the Dominican Republic is an excellent place to observe humpback whales as they migrate south to mate and give birth to new calves every winter. Tour boats run daily during the season and your chances are excellent of spotting these remarkable creatures during the typical tour of 3-4 hours. 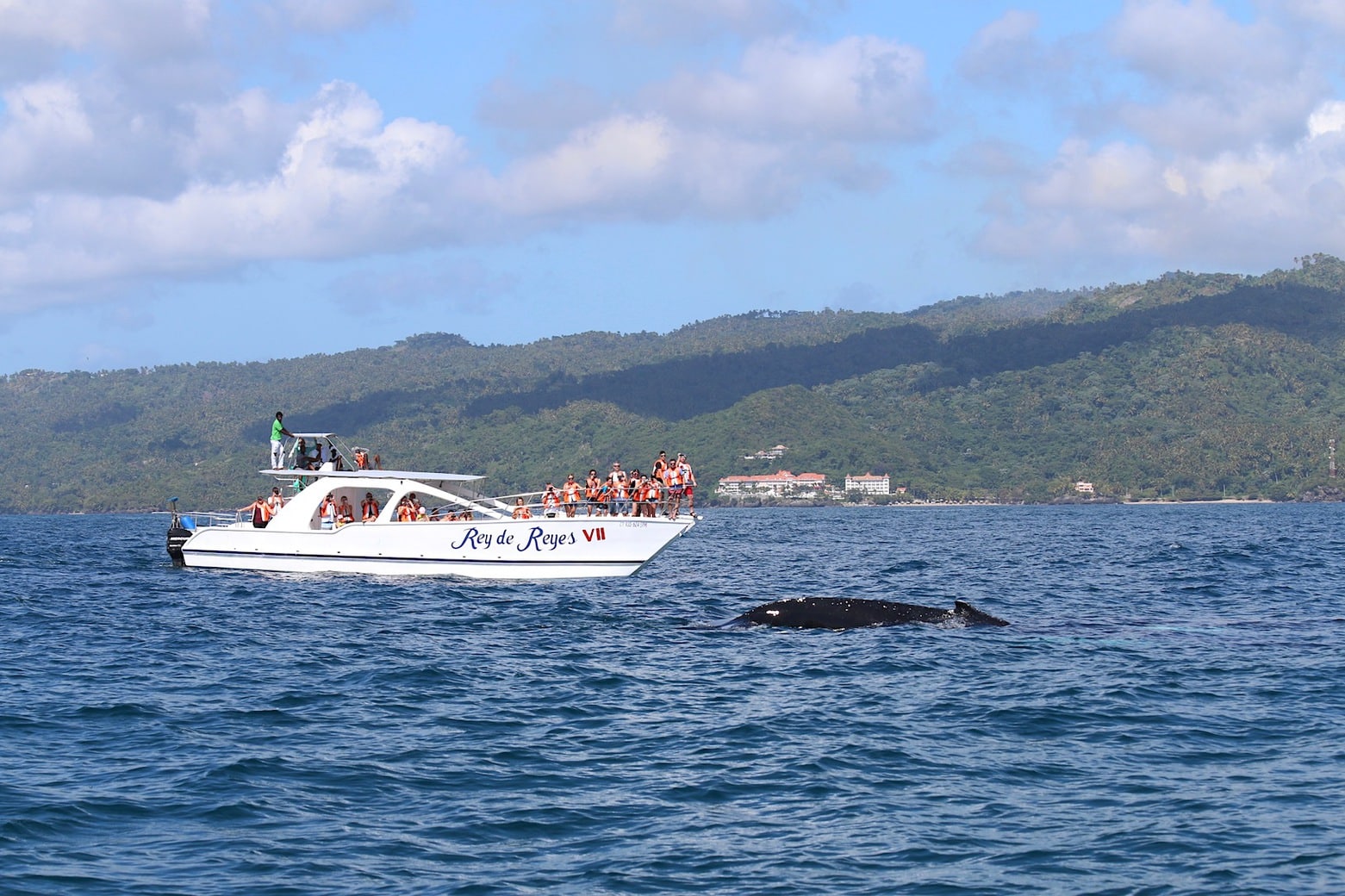 By Bunny’s observations, most of the tour operators in Samana are responsible companies who use professional guides that respect and protect wildlife and follow the strict whale protection laws and guidelines that are enforced in the Samana Bay Marine Mammal Sanctuary. Only one large boat and two small boats may observe a group of whales at the same time, and they must keep a safe distance, not stay too long or travel at high speed. Bunny applauds all these rules.

On Bunny’s tour, it didn’t take more than a few minutes before the first whales appeared. And after that, there was never more than 10 minutes between different sightings during the entire tour.

Humpback whales typically surface about every 5 minutes but they are air-breathing mammals that can swim underwater for up to 40 minutes. They are easy to spot, thanks to their distinctive spouts as they come back up to the surface to inhale. They are also massive - up to 12-15 metres long, weighing somewhere between 30-40 tons - which certainly helps to notice them. 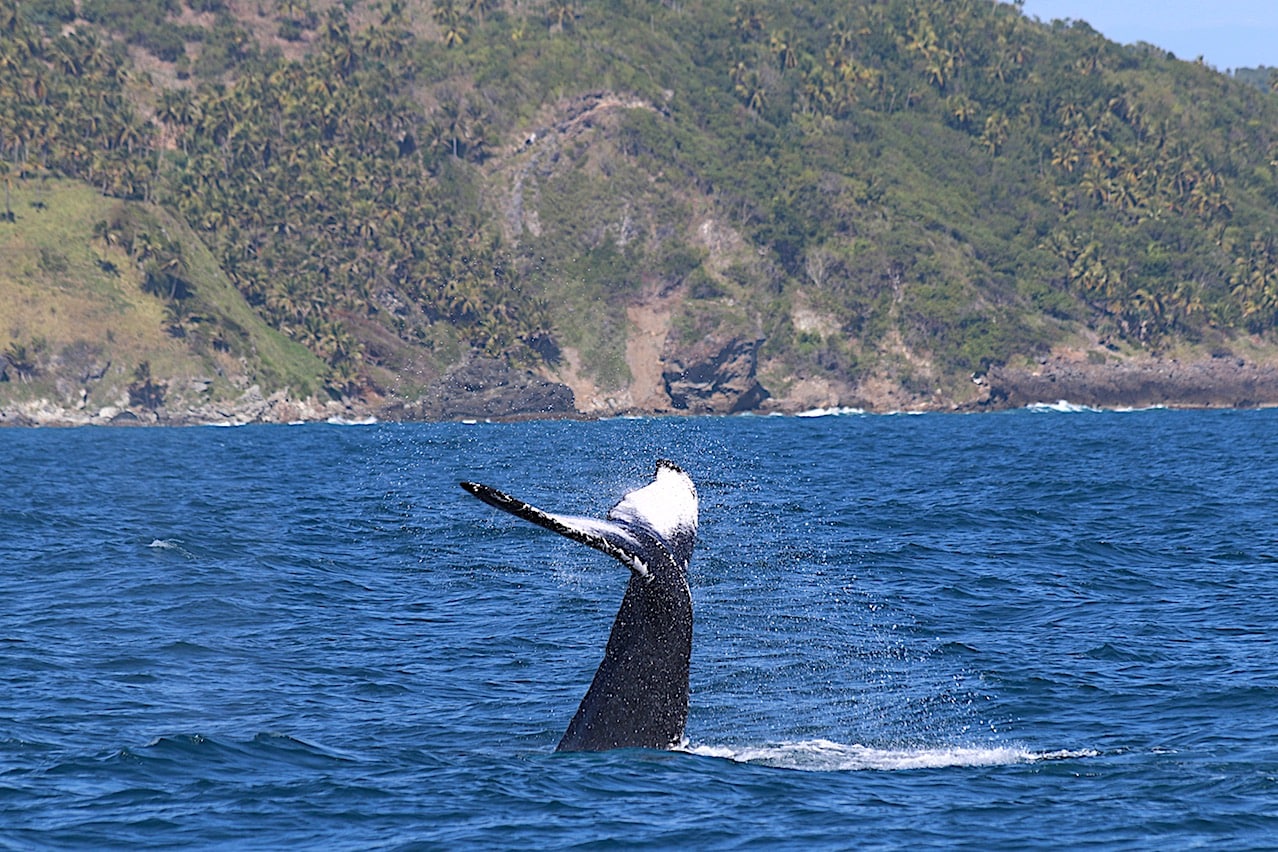 On Bunny’s tour, many of the whales were curious about the boat and did rounds inspecting it. Bunny was thrilled to be so close to the whales. However, it is important to note that the whales themselves wanted to get close, not because they were chased by the boat.

Bunny was able to observe all their characteristic behaviours, including breaching, tail slashing, fin slapping, spy hopping and sleeping postures. A full breach was the only thing that Bunny didn’t get to see in Samana but she reckons there will be a time and a place (hopefully soon!) for that too.

You have probably seen stunning photos of the Japanese macaque, “the snow monkeys”, bathing in hot springs during gentle snowfall. The species is native to Japan and known to be quite intelligent (at least they know how to spa properly, Bunny notes). 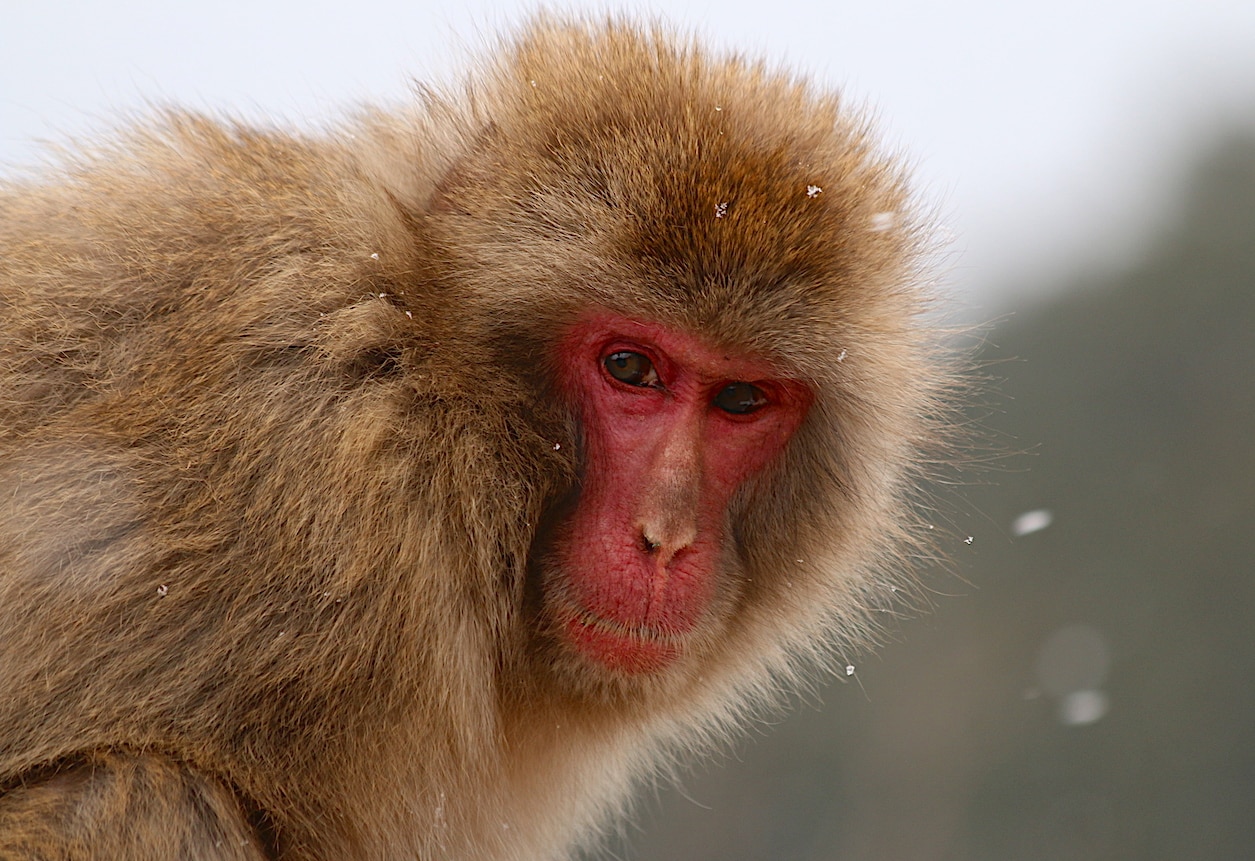 Bunny definitely wanted to see the snow monkeys while in Japan but a trip to the Jigokudani Monkey Park where most of those iconic photos are taken, did not fit her itinerary. After some research, she was very happy to learn that there was another place, the Arashiyama Monkey Park near Kyoto, where she could appreciate these creatures.

Although the park at Arashiyama does not have hot springs for the monkeys to bathe in, it is a beautiful place nevertheless. The monkeys roam free on their resident hill and people are mere visitors who can observe the monkeys' interactions in their natural habitat. On top of the hill, there is a structure where people are contained inside a big cage (a nice change to all the zoos!) while monkeys roam freely around them. 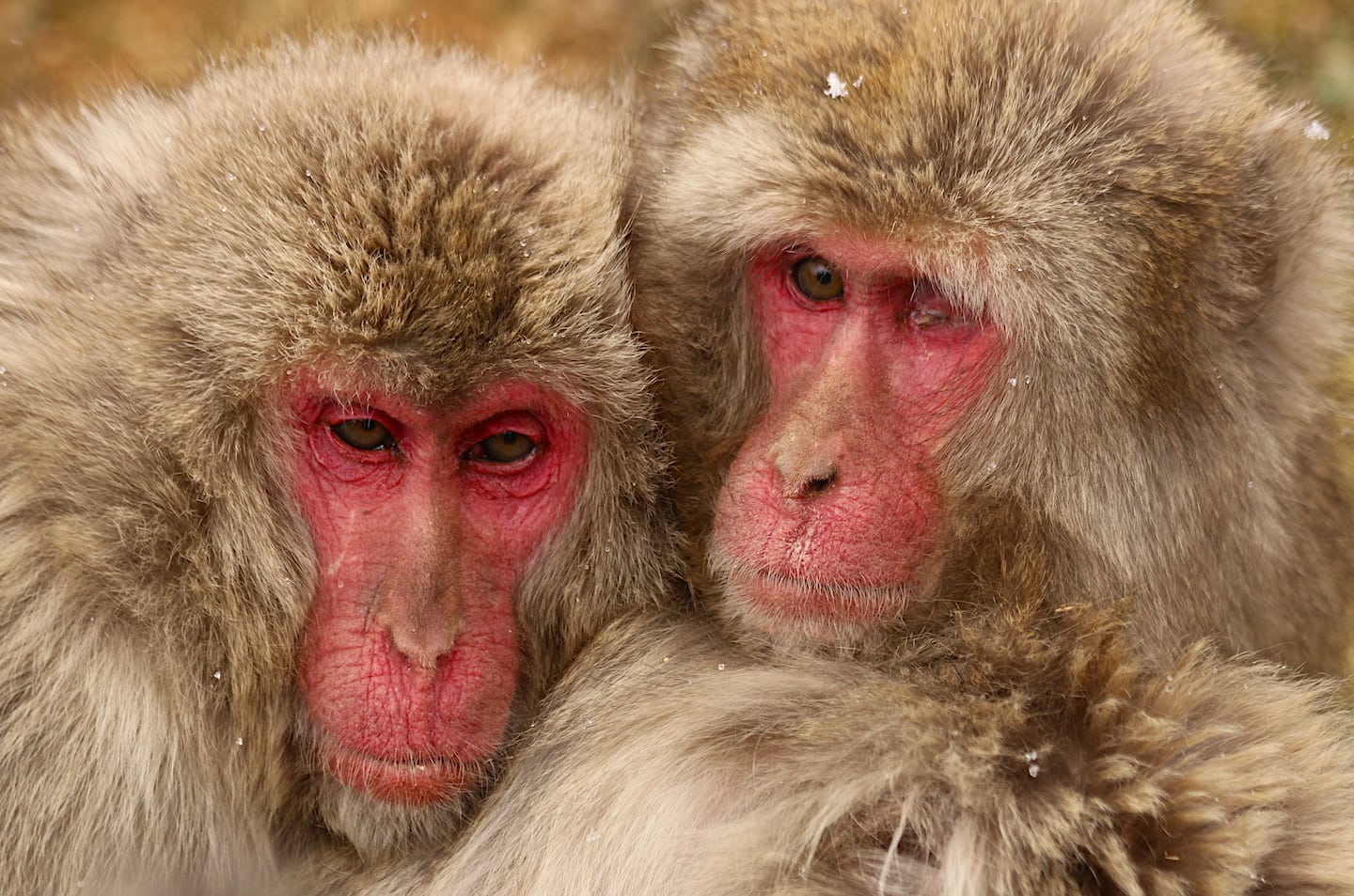 The monkeys are wild, but they are quite used to people and benefit from some human protection. Certain rules apply for everyone’s safety at the Arashiyama Monkey Park but generally you get to experience the macaque at very close range. They are fascinating and very photogenic!

Bunny spent a long time on the hill, admiring the different dynamics and antics of the monkey troop. She also managed to take quite a few nice photos. And just before she was leaving, some soft snow, almost on cue, started falling from the sky to perfect the atmosphere. It was truly a blissful experience.

5. Turtles (St. Vincent and the Grenadines)

Swimming with turtles sounds like a once in a lifetime adventure. Luckily for Bunny, she now lives in an environment where this incredible experience is easily accessible. And yet it does not make it any less magical. 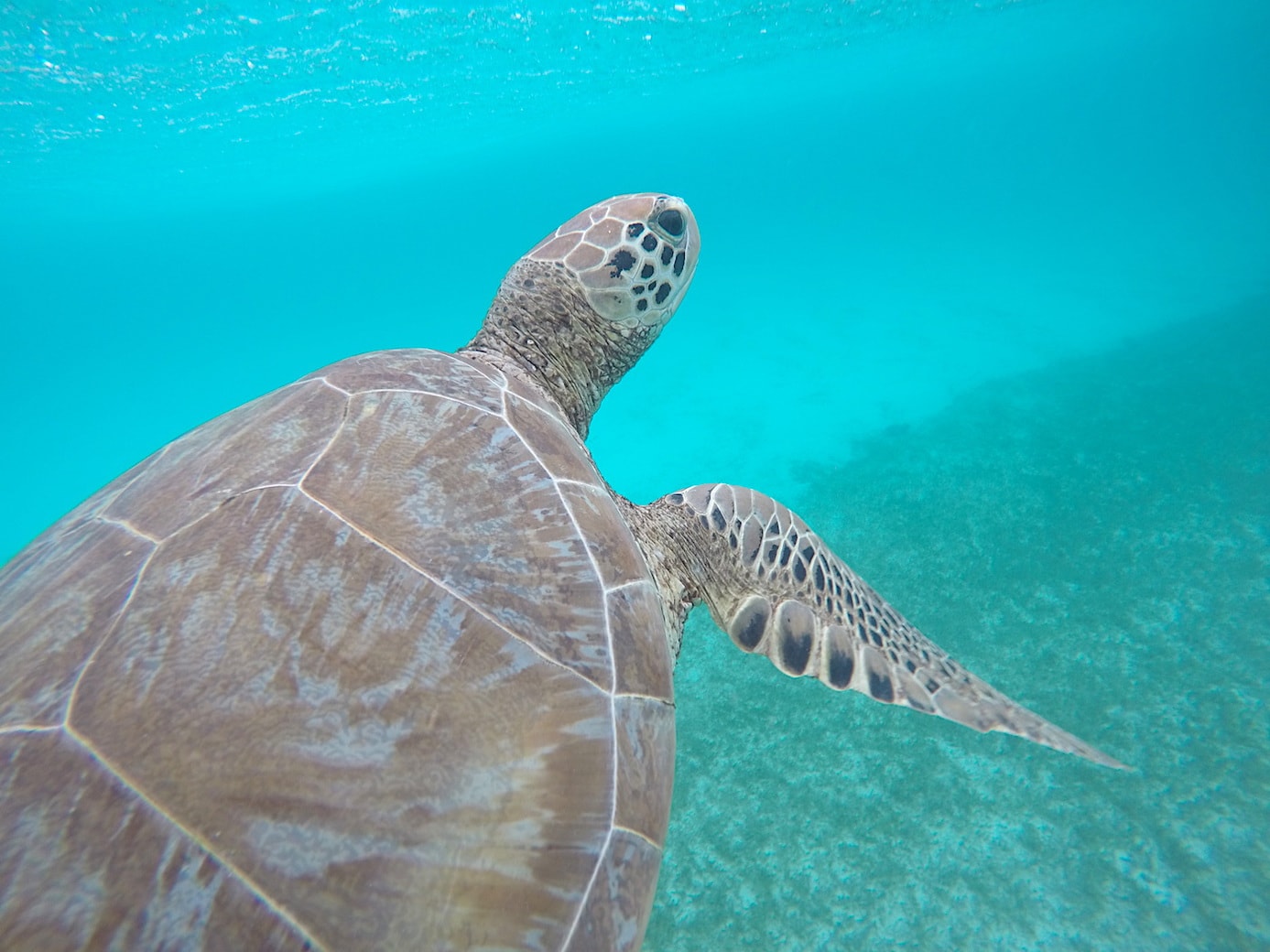 Bunny’s most unforgettable turtle experiences have happened in Tobago Cays in St. Vincent and the Grenadines. This marine park consists of five gorgeous uninhabited cays which provide a sanctuary for sea turtle nesting sites and feeding areas. It is a snorkeler’s paradise with incredibly clear, turquoise water, shallow coral reefs and a friendly population of sea turtles.

It is common to snorkel and swim with turtles in the wild here. There are plenty of green and hawksbill turtles that forage on the seagrass in the area. Many of them have grown used to the snorkelers, while some are more shy, but you are all but guaranteed to meet turtles when snorkelling here. If you’re lucky, they’ll be popping up everywhere around you, going on about their daily business without paying much attention to their fellow snorkelled swimmers. 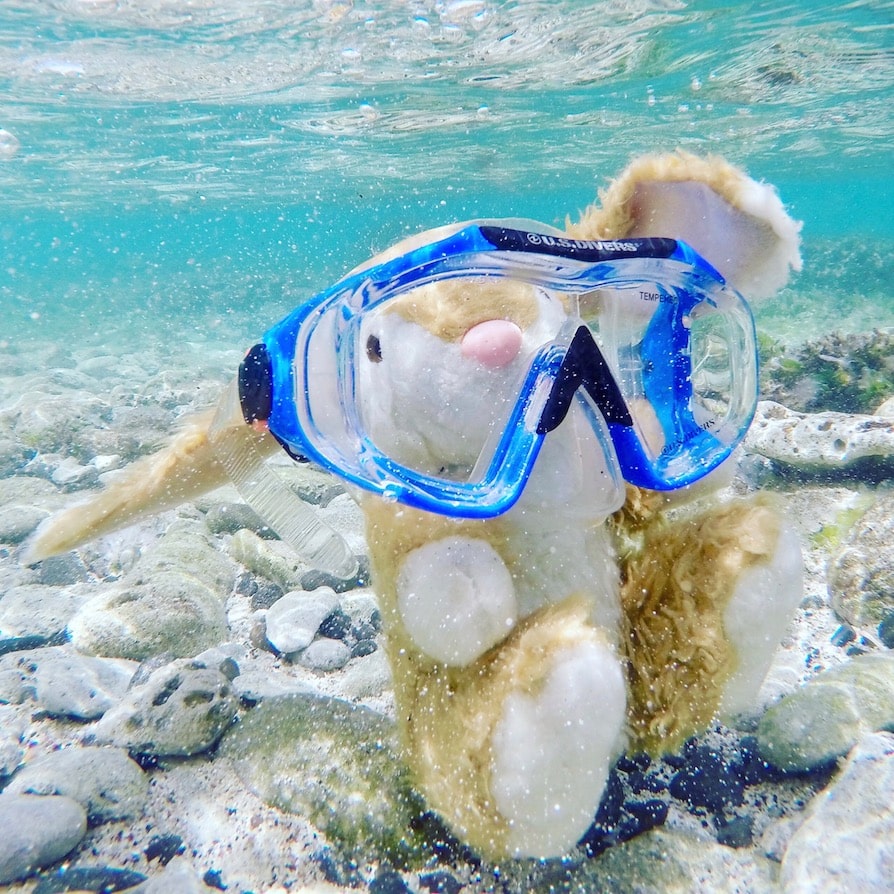 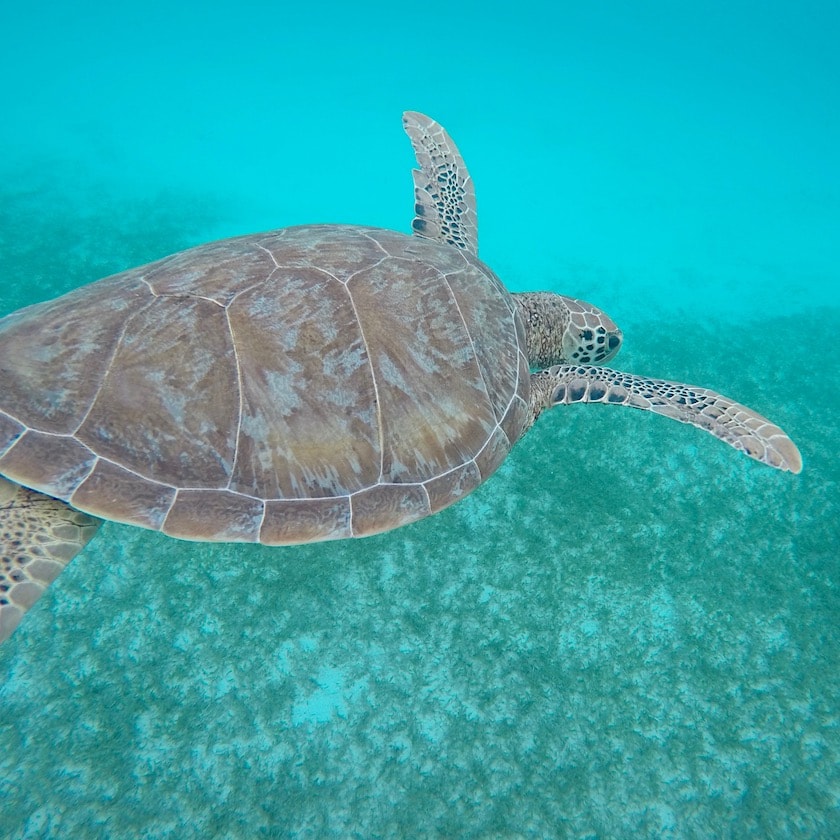 The environment itself is absolutely gorgeous, with swaying palm trees and empty white sand beaches lining the aquamarine waters. Tobago Cays is a popular place for yachts but it doesn’t get busy or have large tourist groups visiting at once. So it is a perfect place for wild and beautiful encounters with sea turtles.

So, after these incredible experiences, what is left on Bunny’s wildlife bucket list? Well, plenty really, but if she had to narrow it down to three, Bunny would definitely go for the following:

Paws crossed for one or all of these bucket list experiences in the near future! 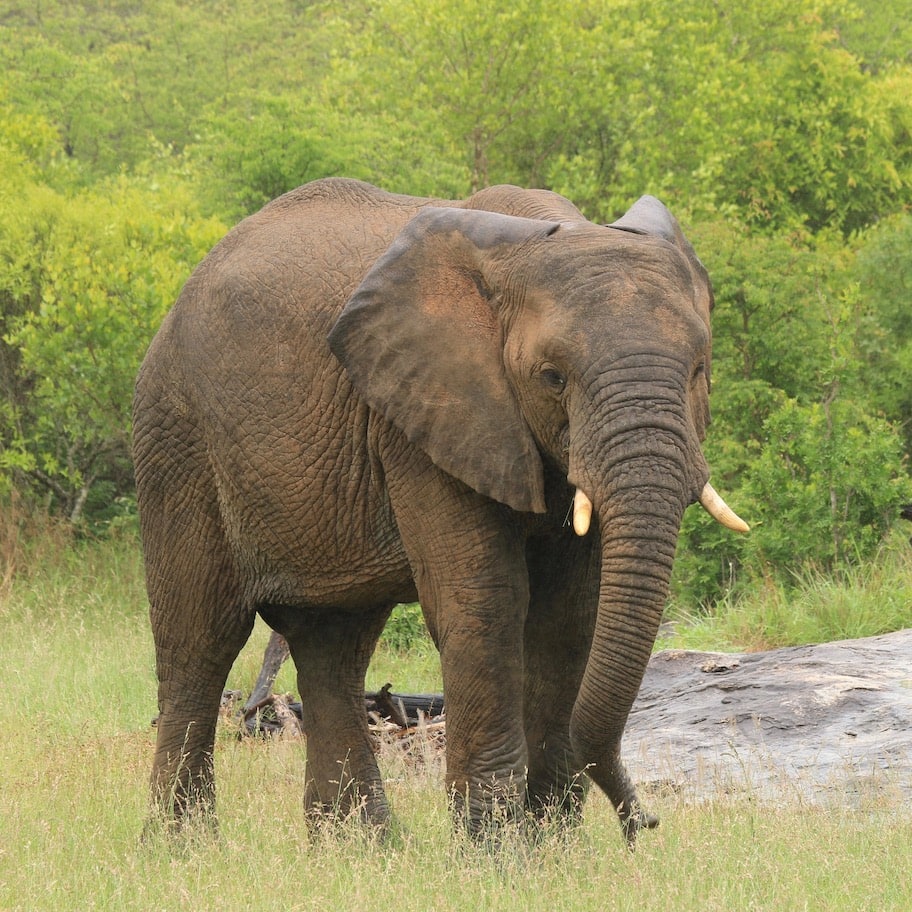 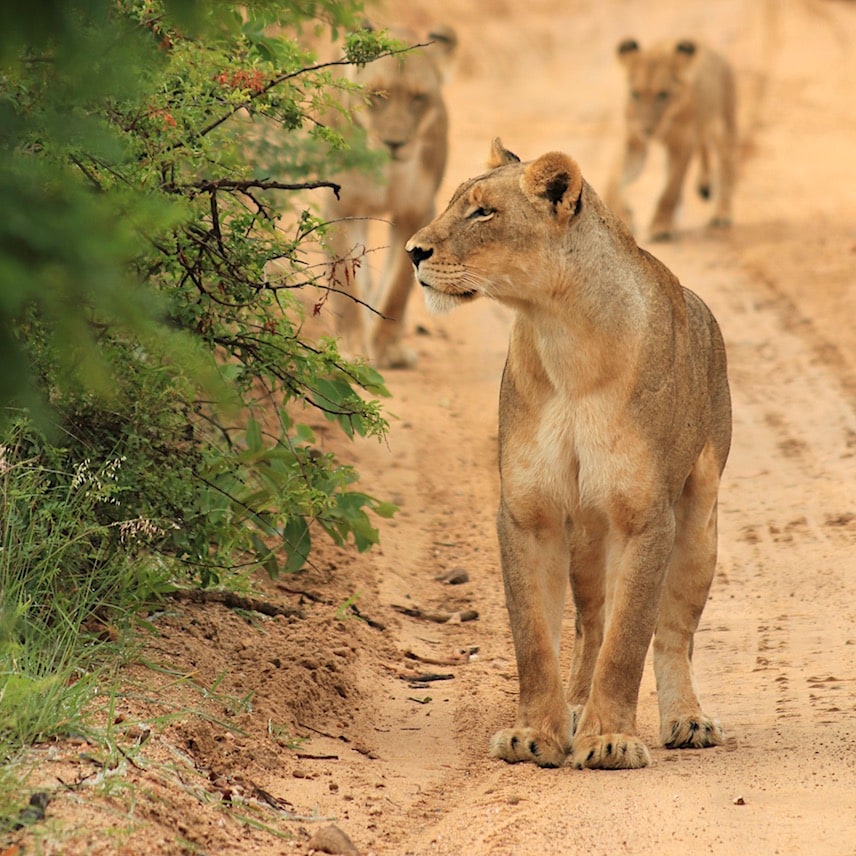 Bunny Visits Bear Sanctuary Prishtina
Bunny never visits zoos or other places where people make money from captive wildlife so she had never seen brown[...]
Read More
Whale Watching in Samana, Dominican Republic
World Class Whale-WatchingBunny has done some whale watching before in Iceland and Newfoundland. Both were thrilling occasions but also damn[...]
Read More
Bunny Visits Tobago Cays
What Are Tobago Cays? Tobago Cays is one of those magical places that looks like it has been lifted from[...]
Read More