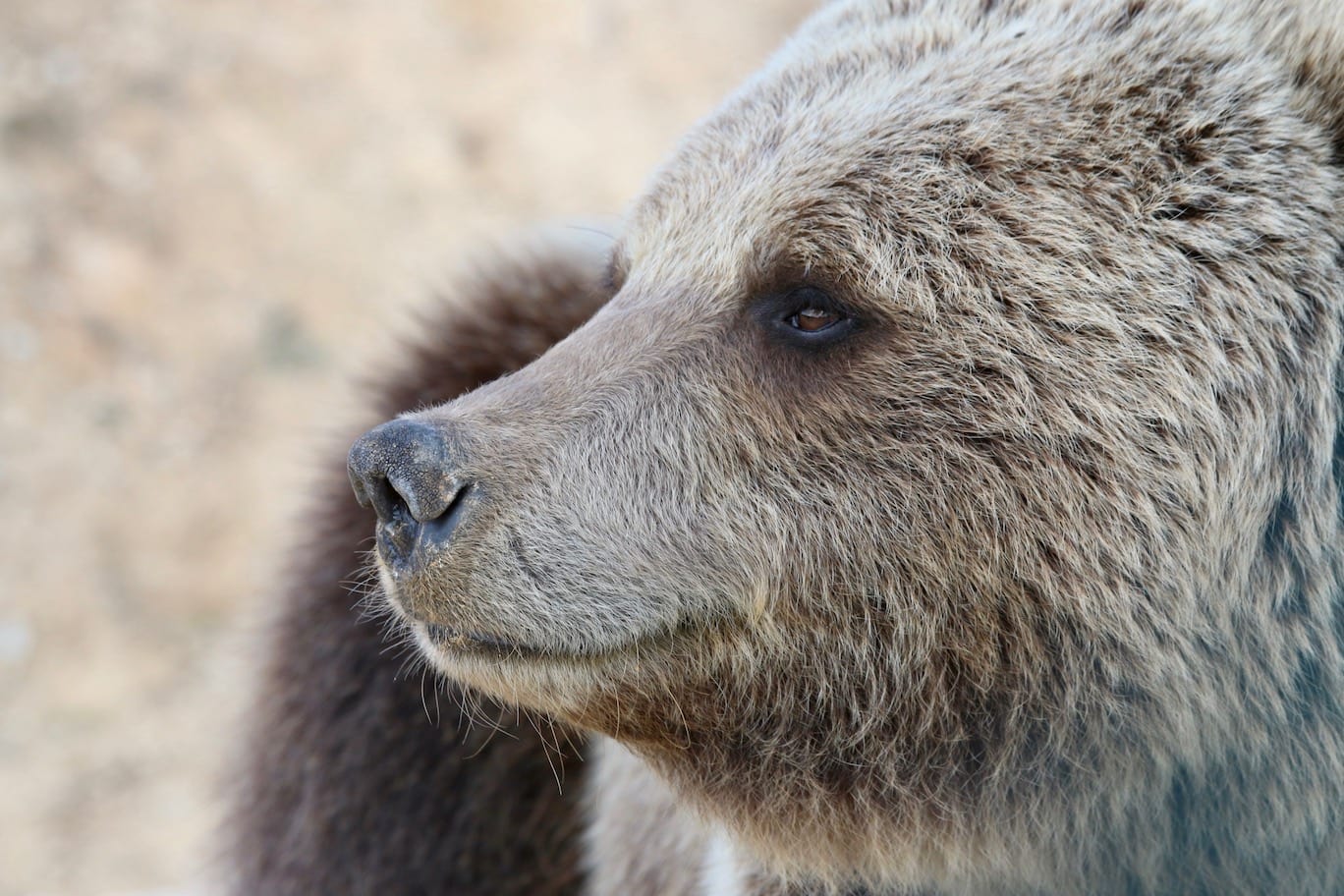 Bunny never visits zoos or other places where people make money from captive wildlife so she had never seen brown bears before visiting the Bear Sanctuary Prishtina in Kosovo.

Originally, she was of two minds about going because there are plenty of places around the world calling themselves “wildlife sanctuaries” without having any real credentials for it. After some meticulous online research, Bunny was convinced that the Bear Sanctuary Prishtina was, indeed, the real deal so she decided to give it a go. 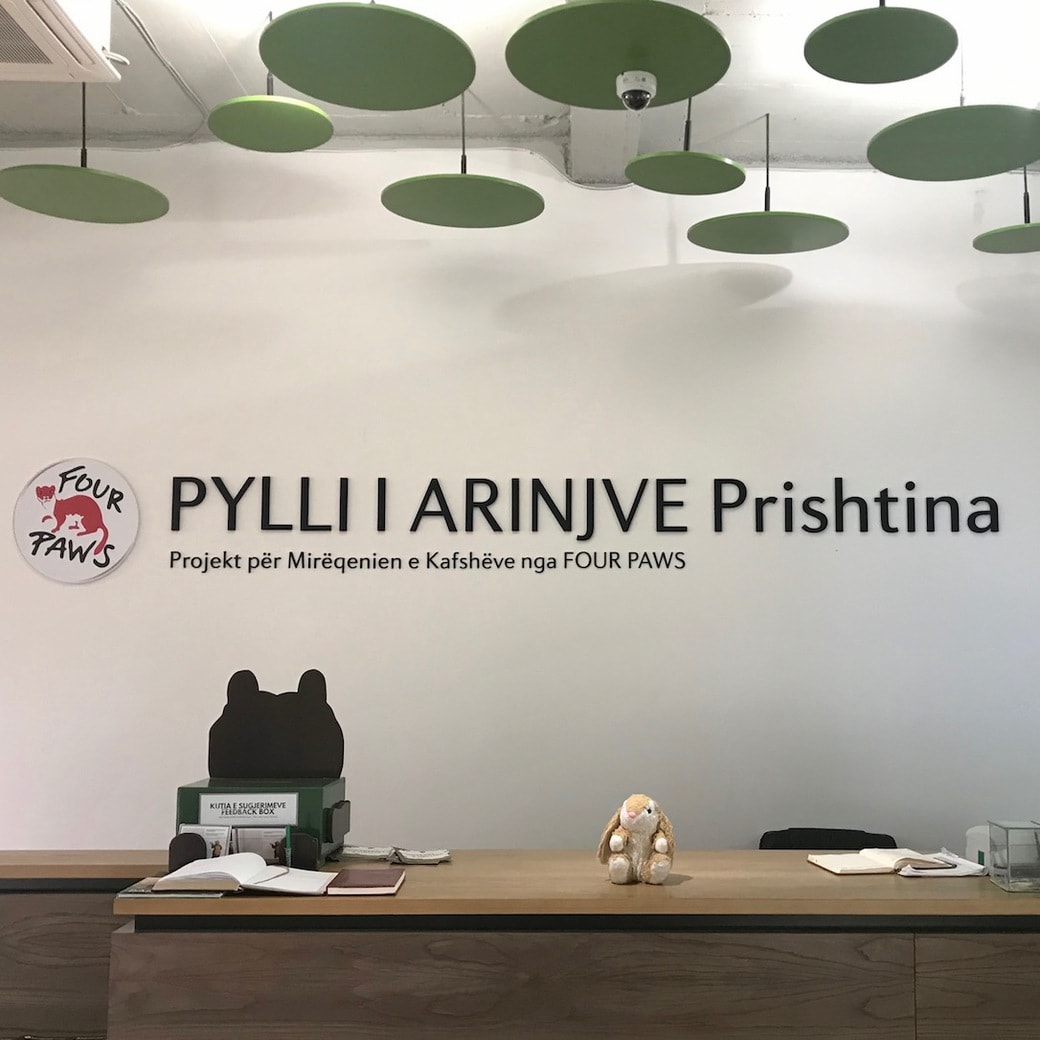 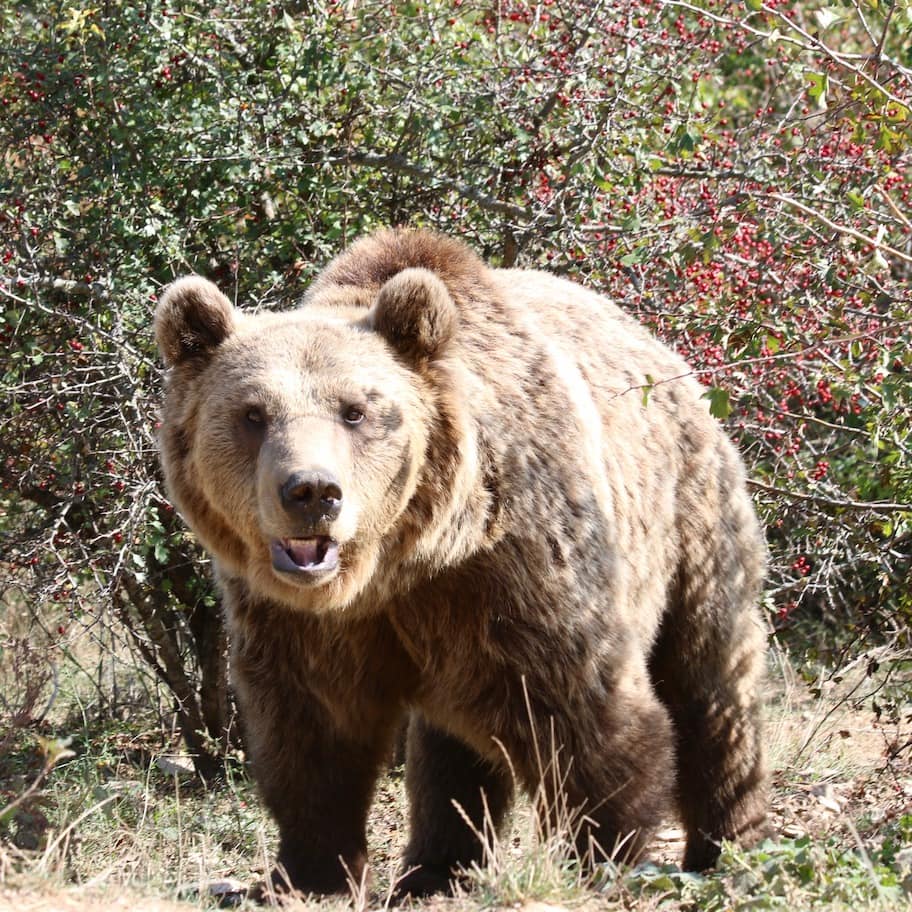 The Bear Sanctuary Prishtina was established in 2013 by the Austrian NGO Four Paws, in cooperation with the Kosovo authorities, to provide a safe haven for rescued “restaurant bears” in the country. 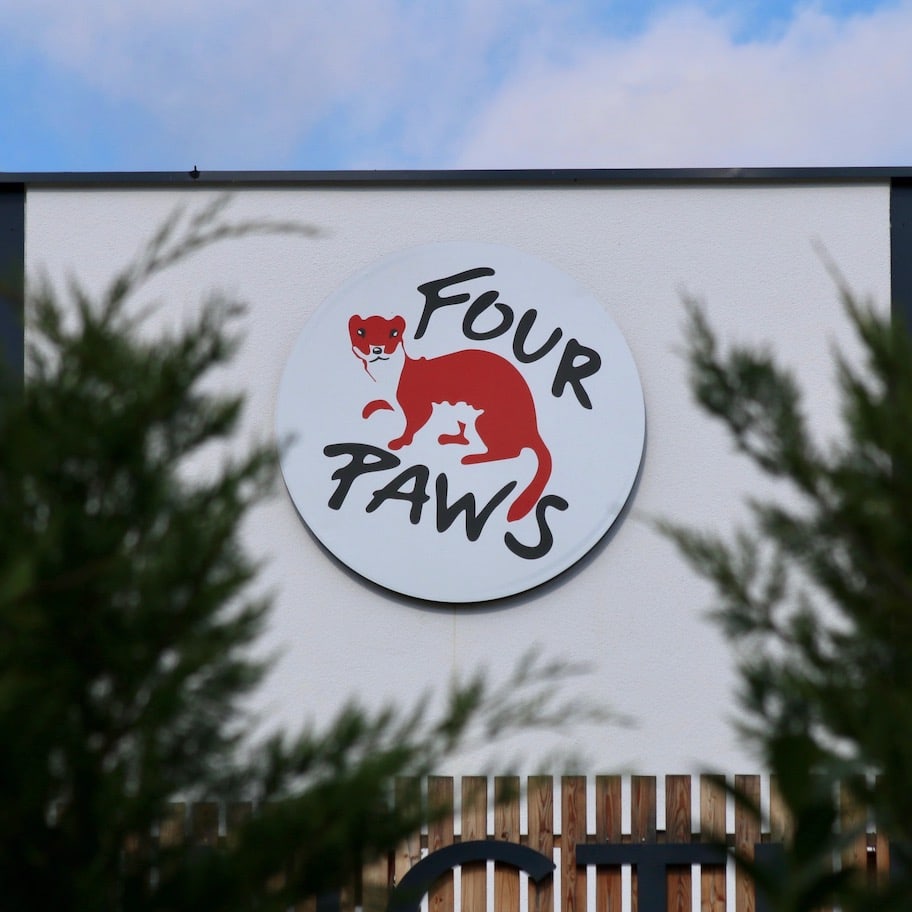 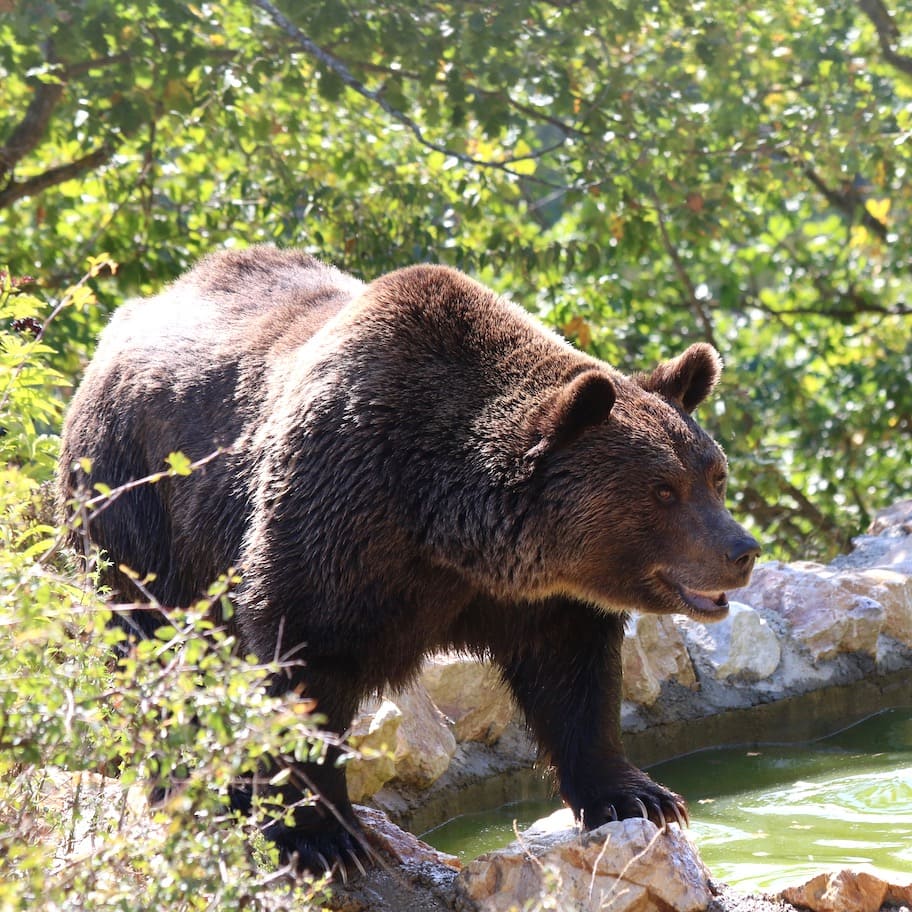 The barbaric custom of keeping bears, often cubs stolen from their mothers, as restaurant mascots in filthy, cramped cages in an attempt to attract more customers used to be quite widespread in Kosovo and other countries in the region.

In 2010, following a rising number of protests, Kosovo made it illegal to keep bears privately. During the following 4 years, the authorities, in cooperation with Four Paws, confiscated and transferred all former restaurant bears to the Bear Sanctuary Prishtina.

The Bear Sanctuary Prishtina is now home to 19 rescue bears. Some of the furry residents were transferred from neighbouring Albania, where many bears are still being kept in appalling conditions today. 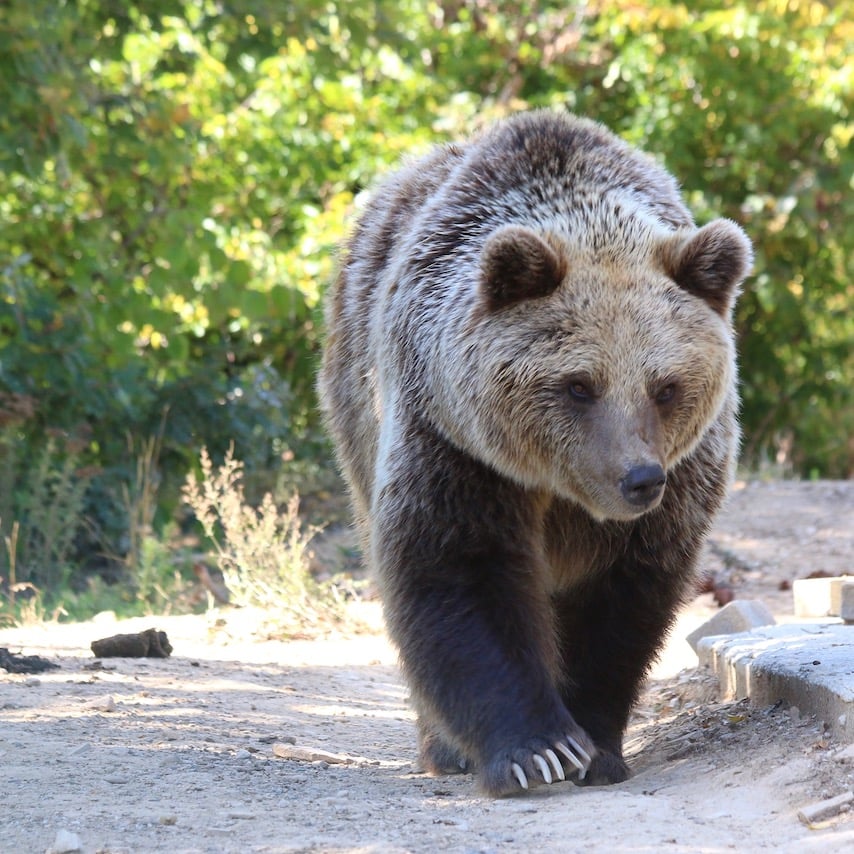 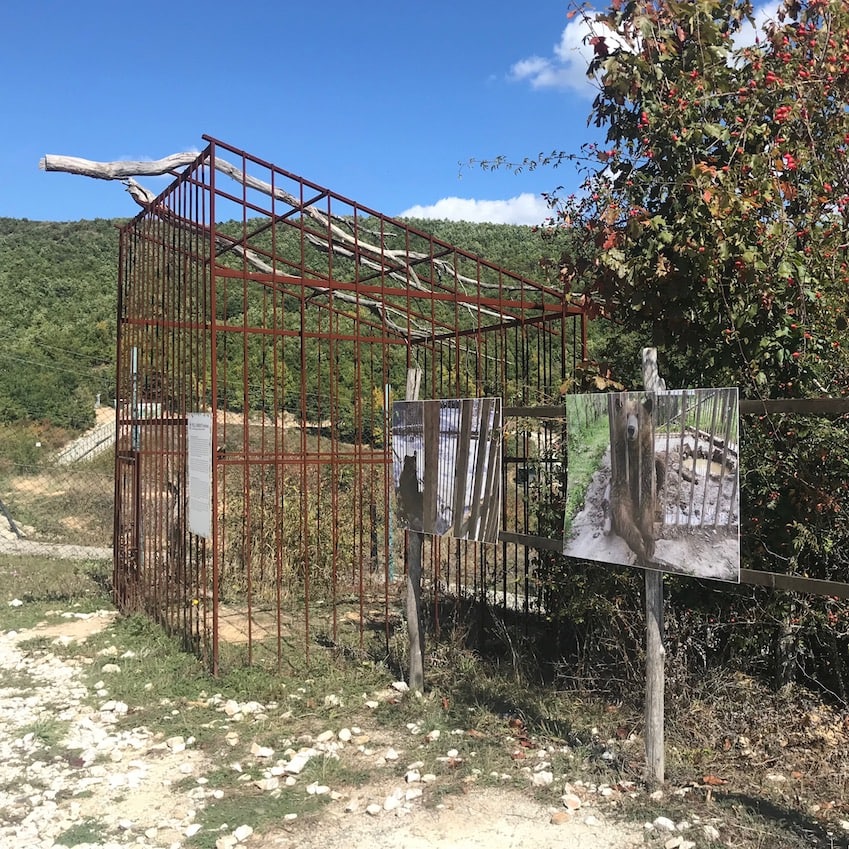 The Bear Sanctuary Prishtina covers an area of 16 hectares of brush terrain. The air is clean and fresh and the mountains provide a nice backdrop to this peaceful haven.

The main building is modern and well-organised, like a piece of Austria in the middle of Kosovo. There is a nice restaurant with a big terrace (and a lot of vegetarian options on the menu), a small gift shop, an environmental education center and a kids play area outside. 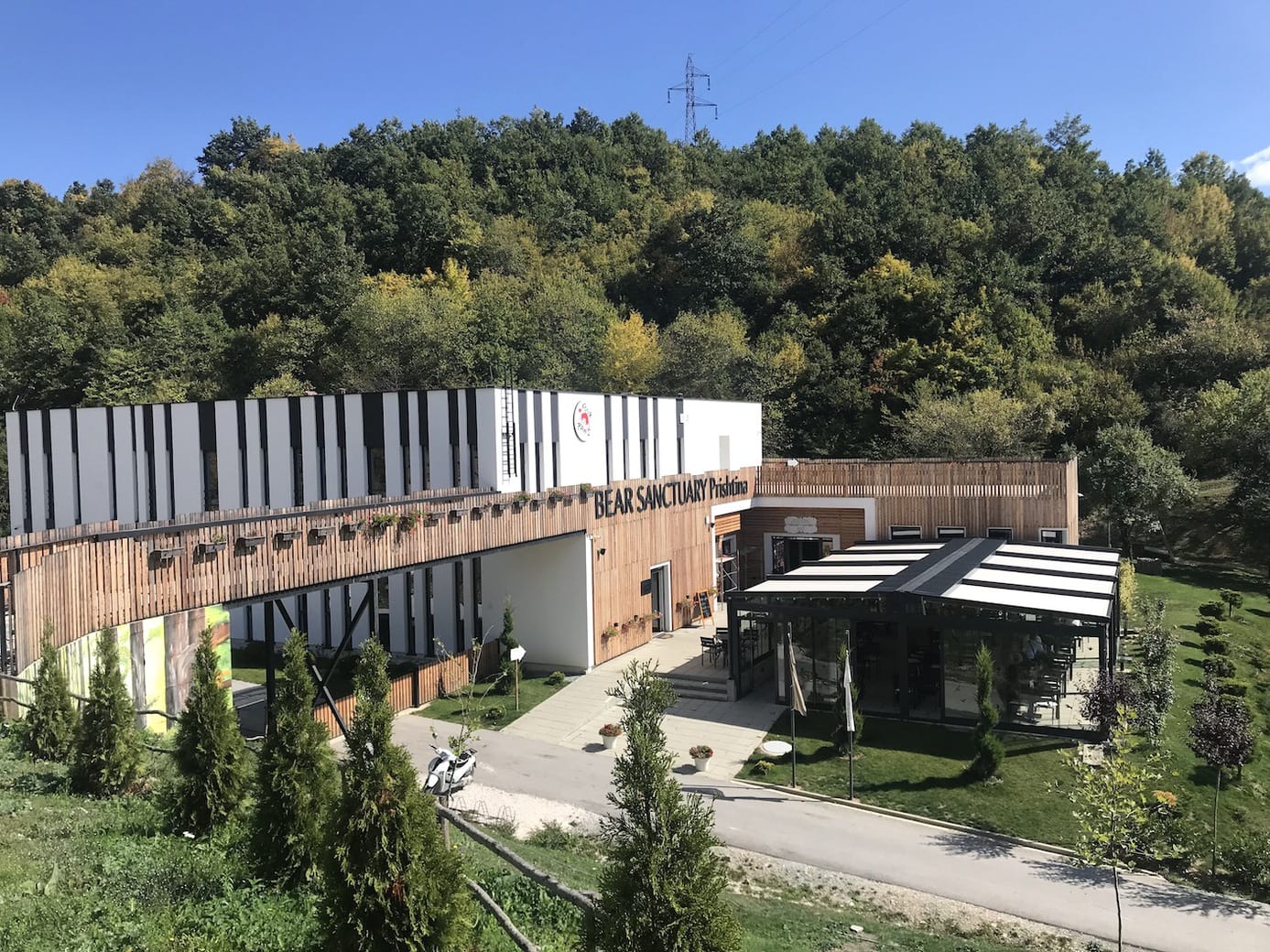 Visitors follow a lengthy, circular walking route that winds past all the bear enclosures. The terrain is quite hilly and rugged, not wheelchair or pram-friendly. There is very little shade along the way, so bring a hat if it is a sunny day.

When the Bunnies visited in September, the weather was beautiful and they were the only guests for most of their visit. It was bliss to enjoy the ambiance of the place in peace and quiet. 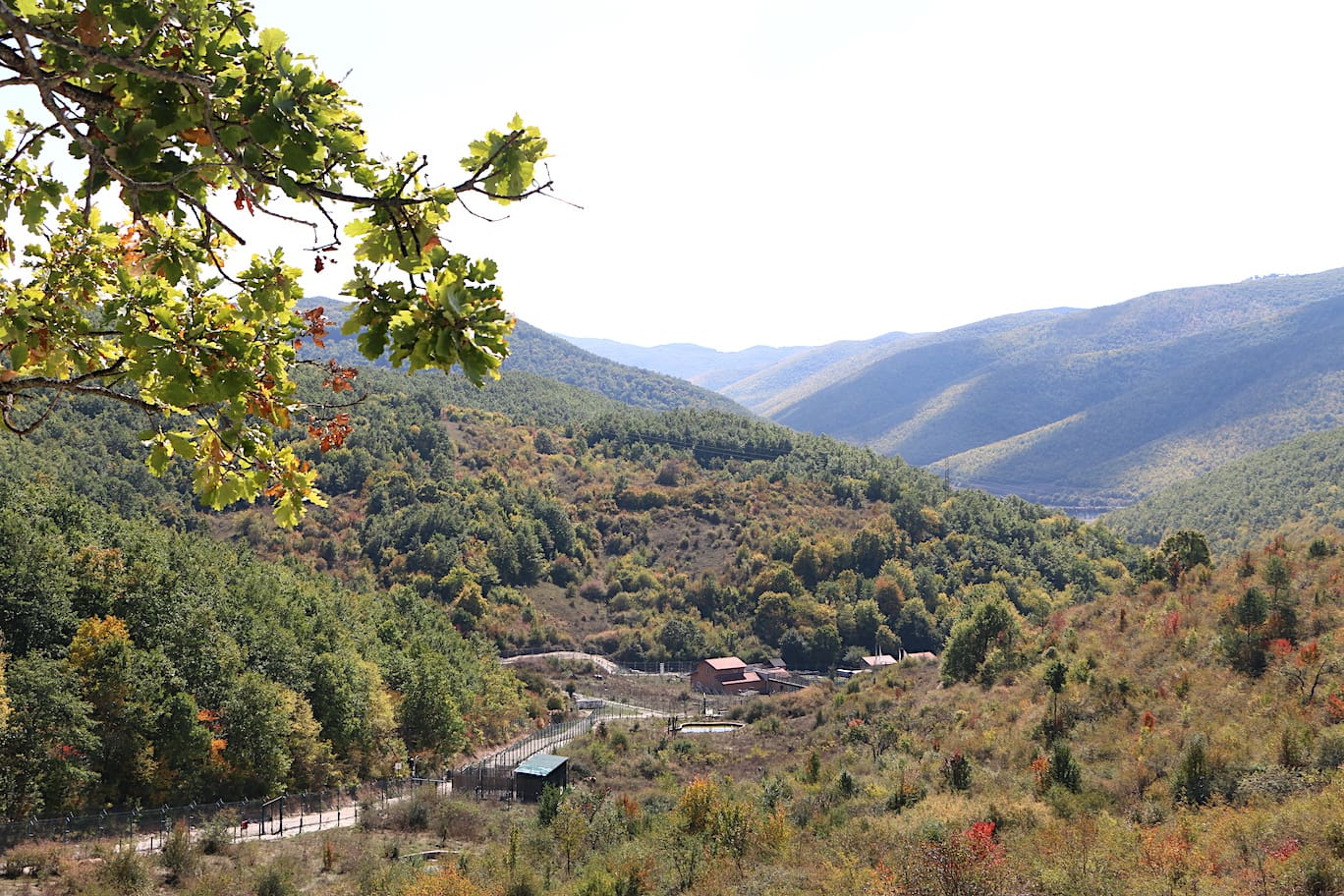 Each bear at the sanctuary has its own story - and they are all heart-breaking. The rescue bears used to be kept in miserable conditions in tiny cages, some of them for more than a decade, and they all suffered from inappropriate diet and various forms of abuse.

Some of the bears still suffer from behavioural disorders, such as compulsively pacing back and forth. This behaviour derives from their previous lives where they were not able to roam freely or have any space in their small cages. At the same time, the Bunnies learned that rehabilitation efforts have considerably reduced this kind of behaviour. 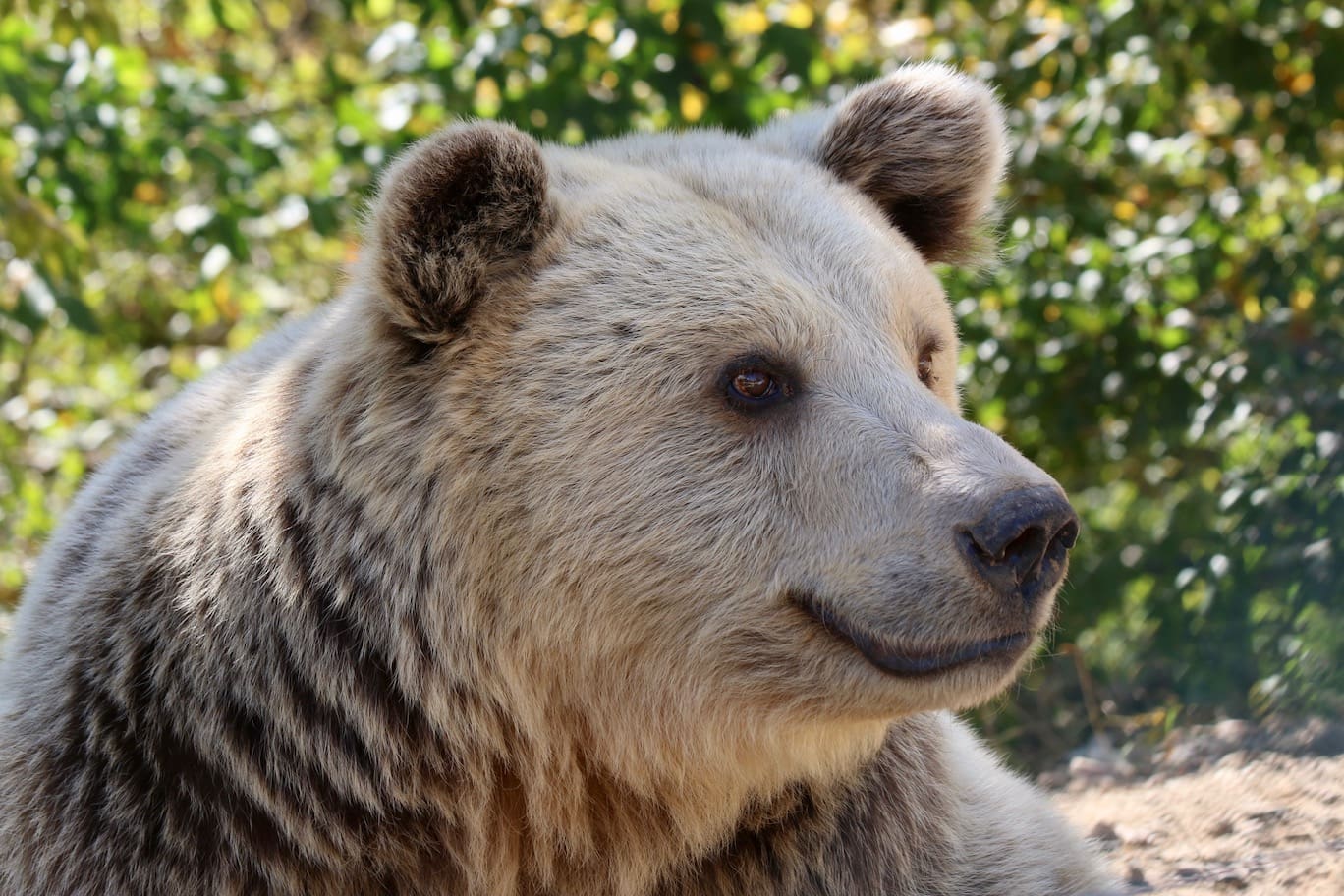 During their time at the sanctuary, the Bunnies were lucky to see almost all of the bears, doing beary things, such as taking baths, splashing around in their pools, grooming each other’s ears, napping on the grass and scratching their backs against the shrubbery. In addition to plenty of space to roam around, the bears at the sanctuary have trees to climb, toys to play with and quiet, shady places to retreat to when they want some solitude.

Each bear has its own fact sheet posted outside their enclosure so you can learn facts about their past story and present personalities.

For example, Mal enjoys the shade of the trees after a decade spent in a cage which offered no shelter from the sun. Lena is sensitive to loud noises. Rina doesn’t care for cucumbers. Ari is very docile and good-natured, while Vini is a high-energy bear. Pashuk used to have a chain around his neck, which dug deeply into his flesh as he grew. Kassandra, who spent her first 11 years in a tiny cage with a terrible diet, is now a fussy eater who enjoys watermelons. Hope likes to leap into her pool and cause a huge splash. Ema, Oska and Ron, having been rescued as a pack of cubs five years ago, still stick together.

All the bears the Bunnies observed looked healthy, awe-inspiring in their size and well-adjusted to their current conditions. 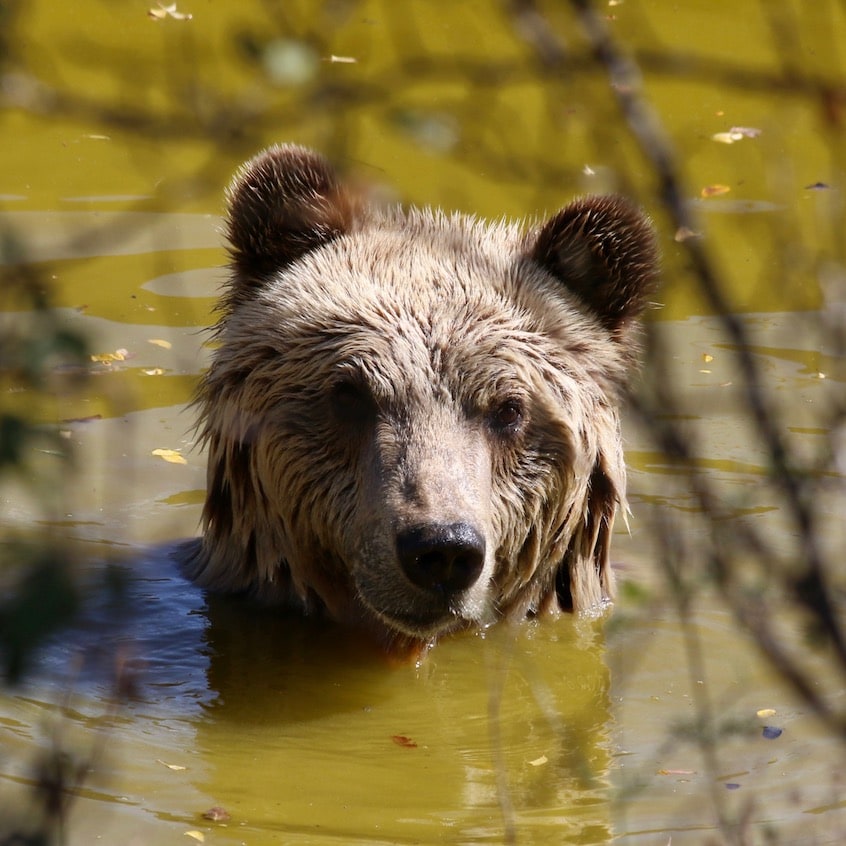 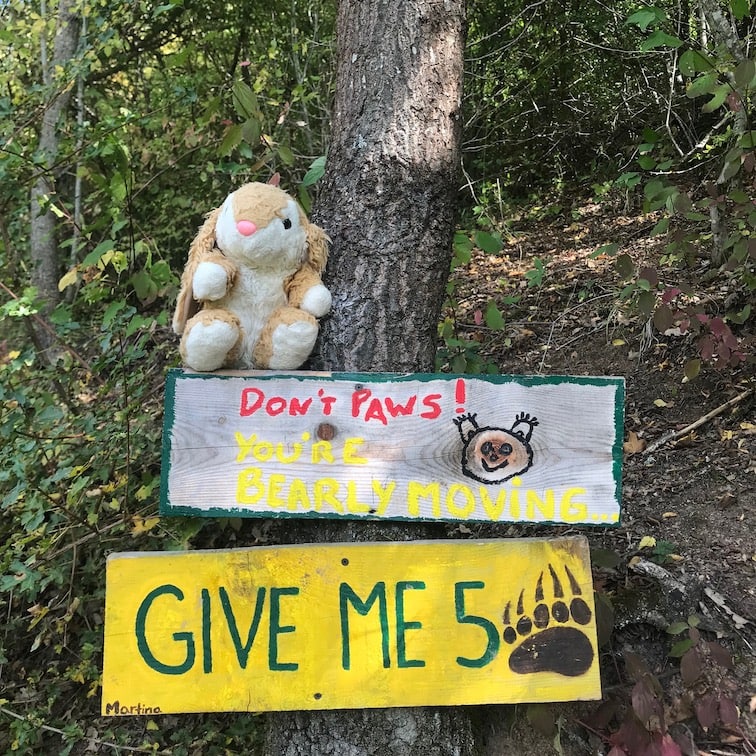 Why Not Free The Bears?

As nice as the sanctuary is, Bunny does not enjoy seeing animals in captivity. Wouldn’t it be better just to release these bears into the wild? 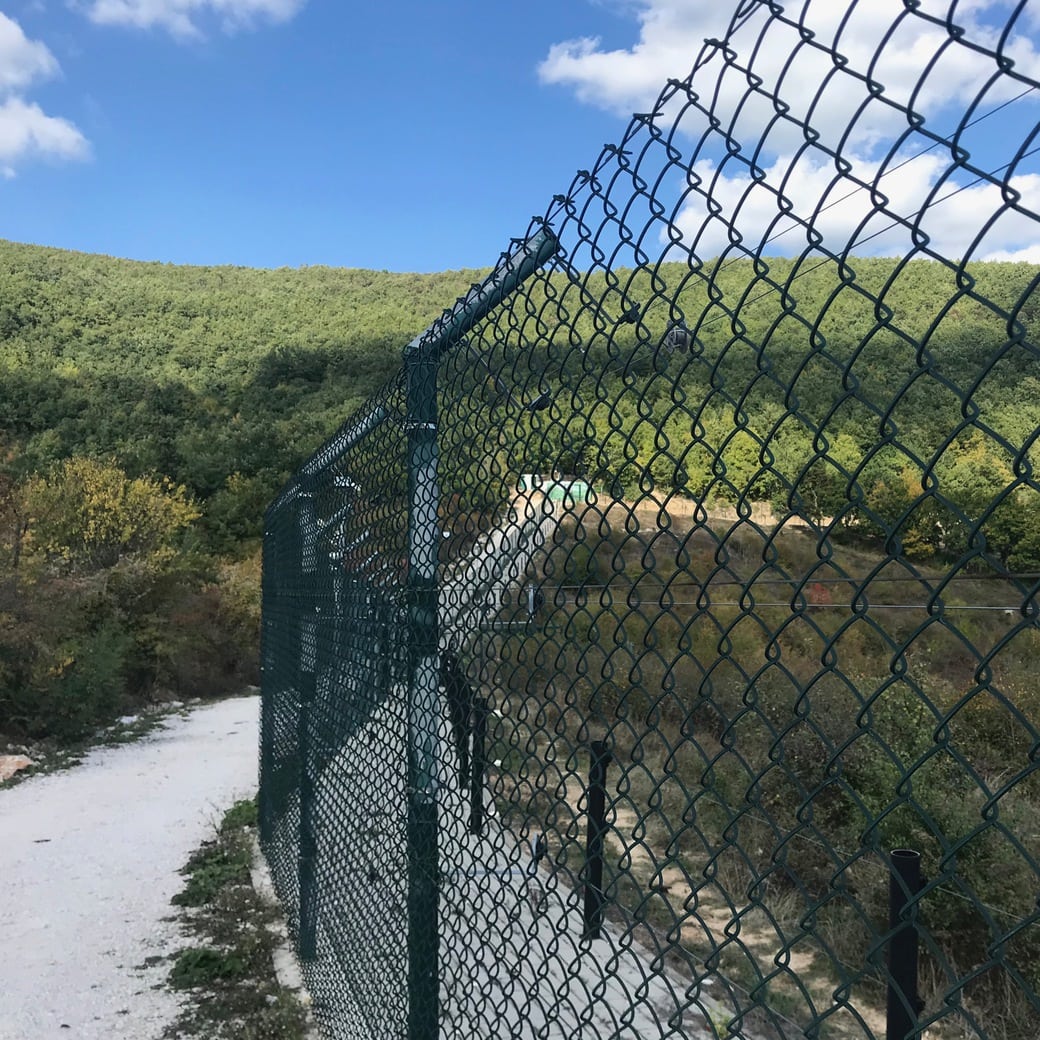 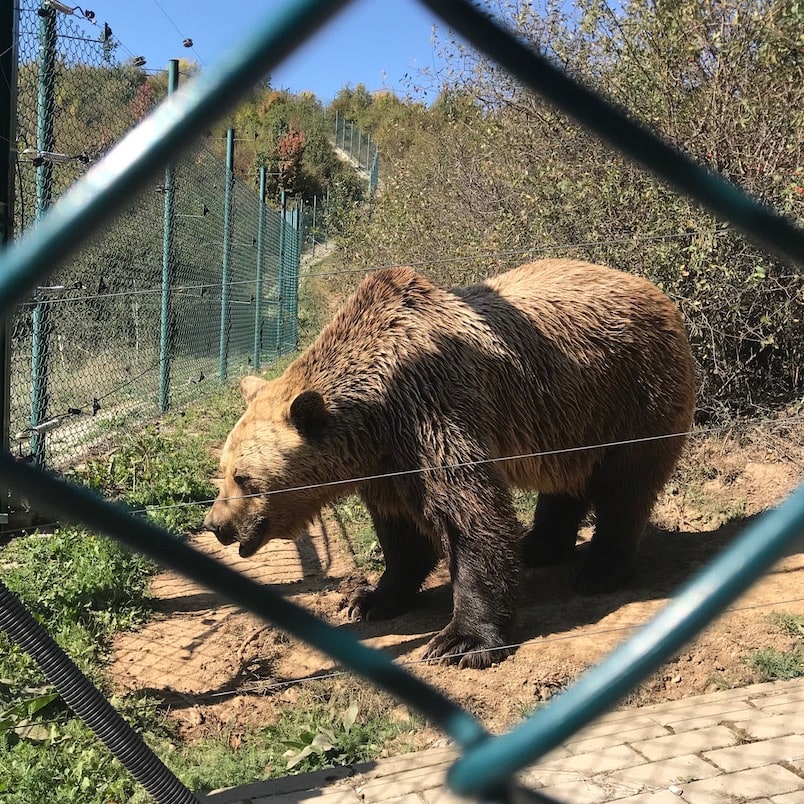 Sadly, it is not possible. Since all the bears had been kept in captivity in close proximity to humans, they have not had an opportunity to learn how to be bears in the wild. They have not had a mother to teach them how to gather food and avoid dangers. Instead, they have become to associate human contact with food.

If the bears were released into the wild, they would search for food by seeking out humans and would eventually be recaptured or, worse, shot. 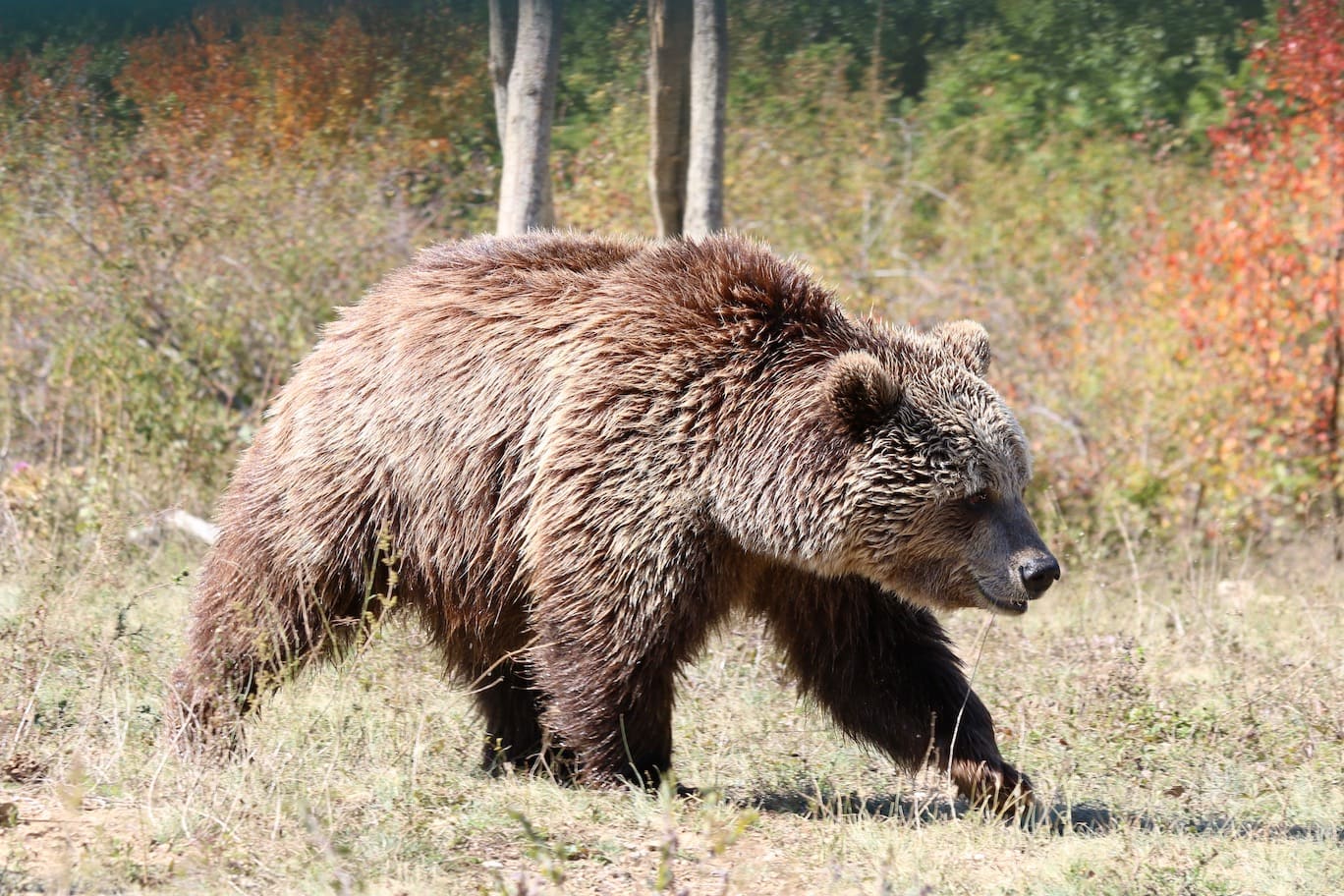 At the sanctuary, you are asked not to shout at the bears or feed or taunt them in any way. Photographing them is allowed but not necessarily easy. There is double-fencing, part of it electrified, around all the enclosures. Getting clear shots of the bears was surprisingly tricky because of this set up.

In addition, some of the enclosures are huge (as they should be!) and the bears might not be in the mood to meet you. Fair enough, Bunny says. Bring a zoom lens and a lot of patience.

It might also be a good idea to avoid midday visits as direct, harsh sunlight is not a photographer’s friend. That said, Bunny arrived at the sanctuary exactly at noon on a sunny day and still managed to take some decent photos. 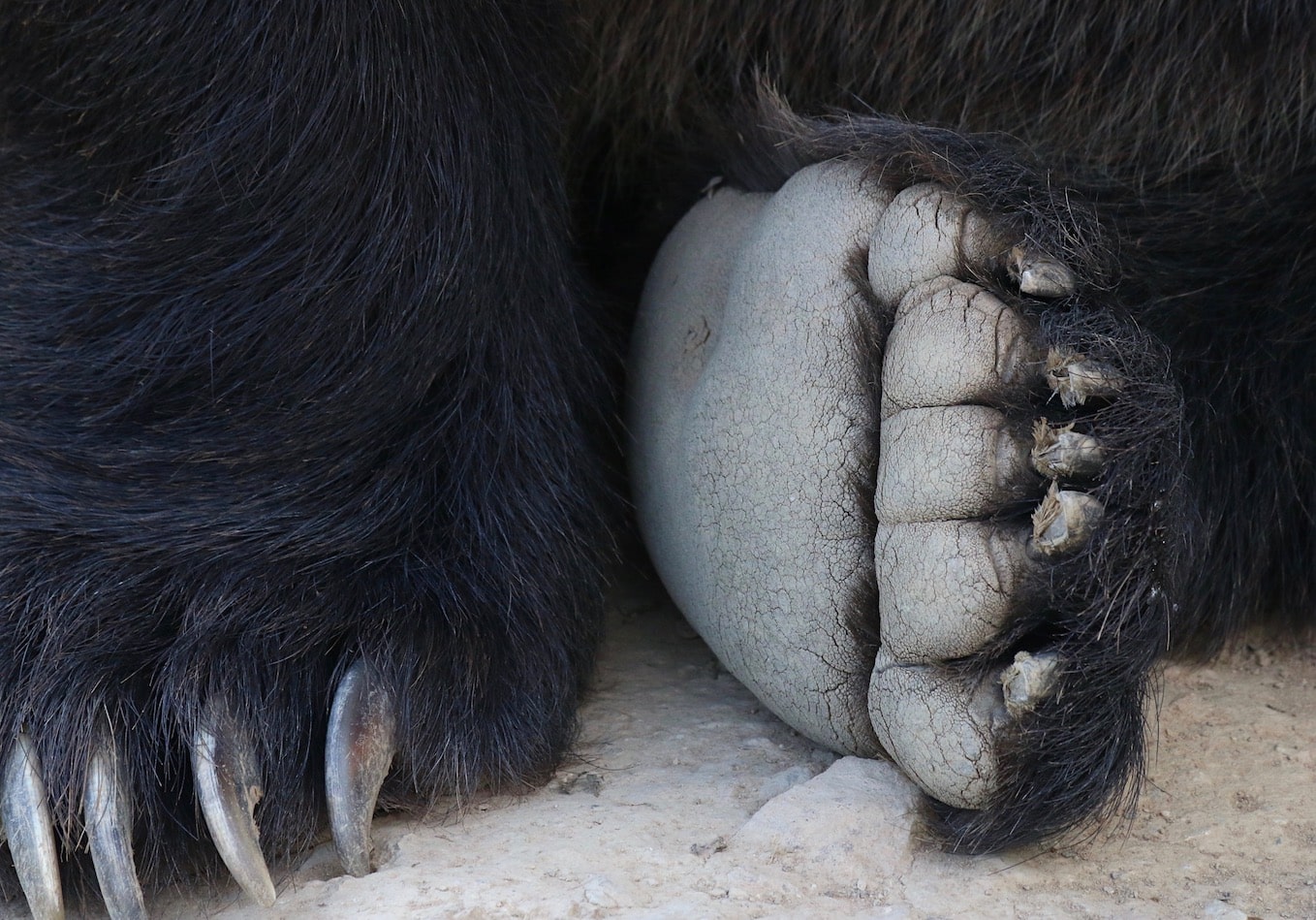 The Bear Sanctuary Prishtina is open daily from 10am to 7pm (4pm in Nov-Mar).

It is located near the village of Mramor, approximately 20km from Pristina. If you have your own car, the sanctuary is easy to find thanks to all of the signposting along the way. A taxi ride from Pristina will cost you 12-15 euros one way. At the end of your visit, the sanctuary’s friendly staff will be happy to call you a taxi.

There are also frequent busses from Pristina but taking a bus means having to walk the last 2,7km from the main road. Bunny decided to take a taxi as it was affordable, especially as the tab was split with Mr. Bunny.

The entrance fee to the sanctuary is 2 euros. That’s right, Four Paws is not in the business of making money here. Kudos to them. Given the low entry fee, do consider stuffing a few more dollars into the donation box found in the main visitor center to support this important work. 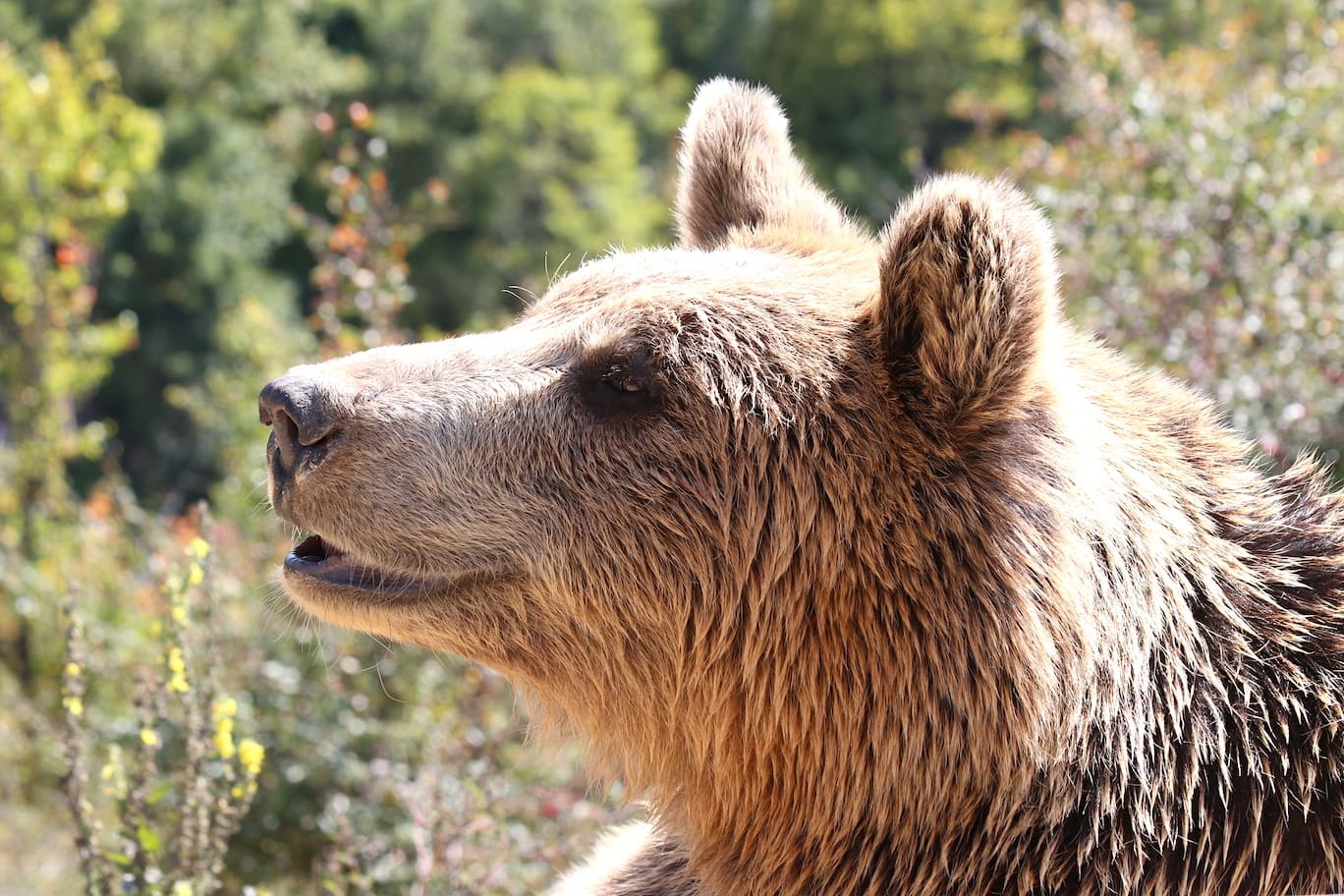 The Bear Sanctuary is a 10-minute drive from Gracanica Monastery, so it is easy to combine these two worthy attractions outside Pristina.

The Bear Sanctuary Prishtina is the place to see brown bears in the Balkans, Bunny says, not some restaurant or zoo where the bears live a miserable existence just to make money for their ruthless owners.

The Sanctuary offers a wonderful opportunity to observe brown bears at close quarters, without disturbing their daily activities or routine. By visiting you also support the admirable efforts of Four Paws, assisting in wildlife rehabilitation around the world. 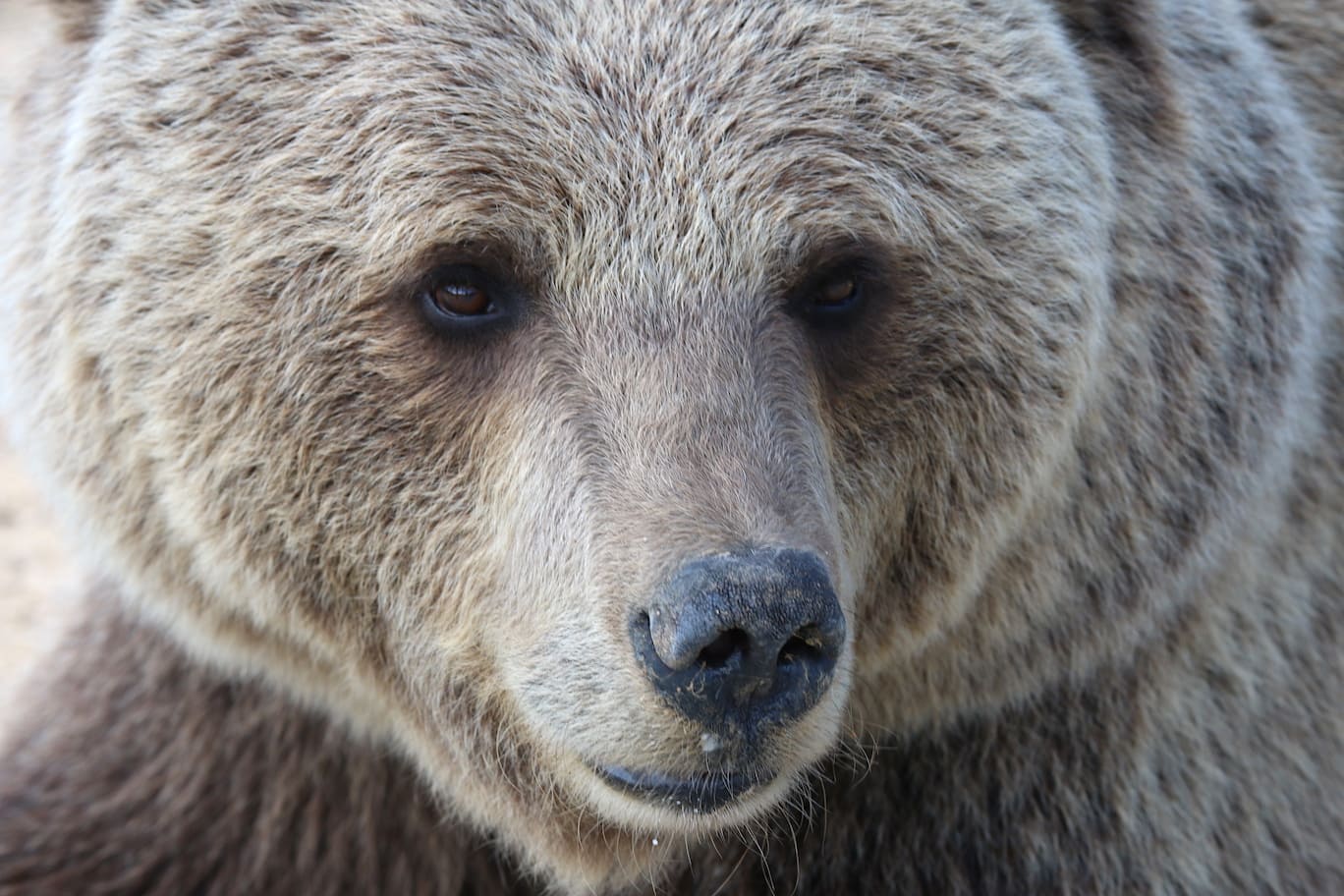 Bunny’s Lazy Day Trip to Bratislava
Vienna might be the most livable city in the world but on any Sunday or national holiday, the whole city[...]
Read More
Winter Weekend in Budapest
Budapest is an ideal city for a winter weekend break in Europe. It is a vibrant place, full of historic[...]
Read More
What to Do in Vienna on a Sunny Day?
Bunny is not in favour of spending hot summer days in the city, but sometimes you have no choice. If[...]
Read More