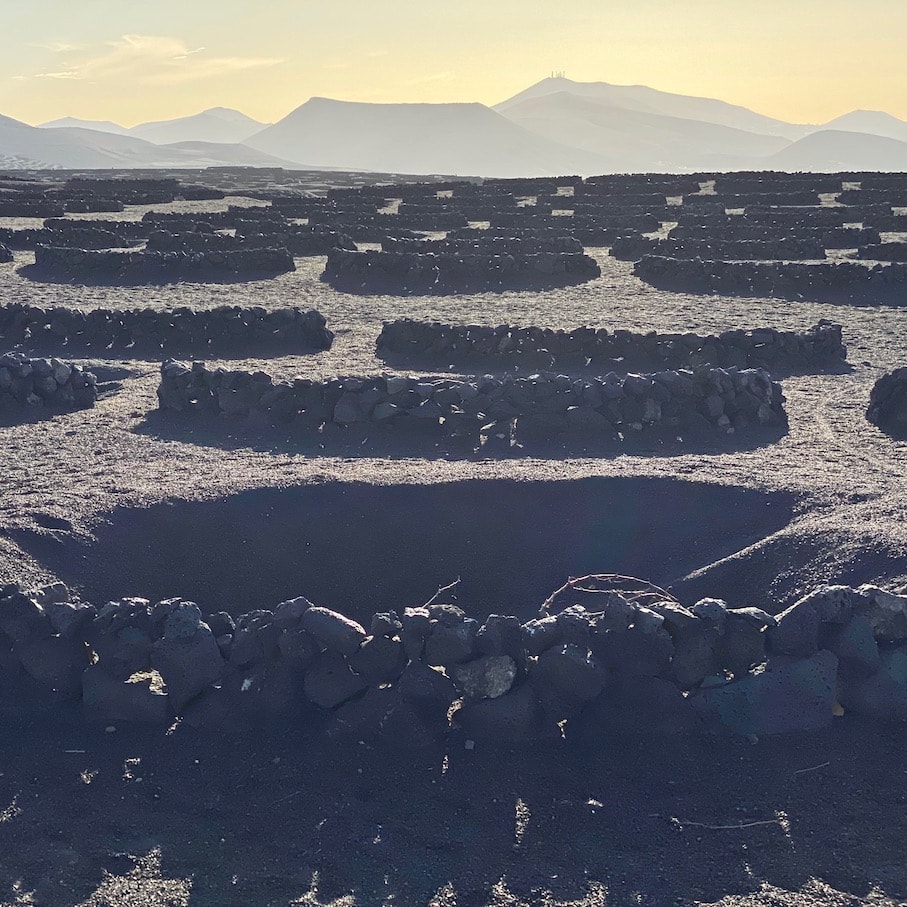 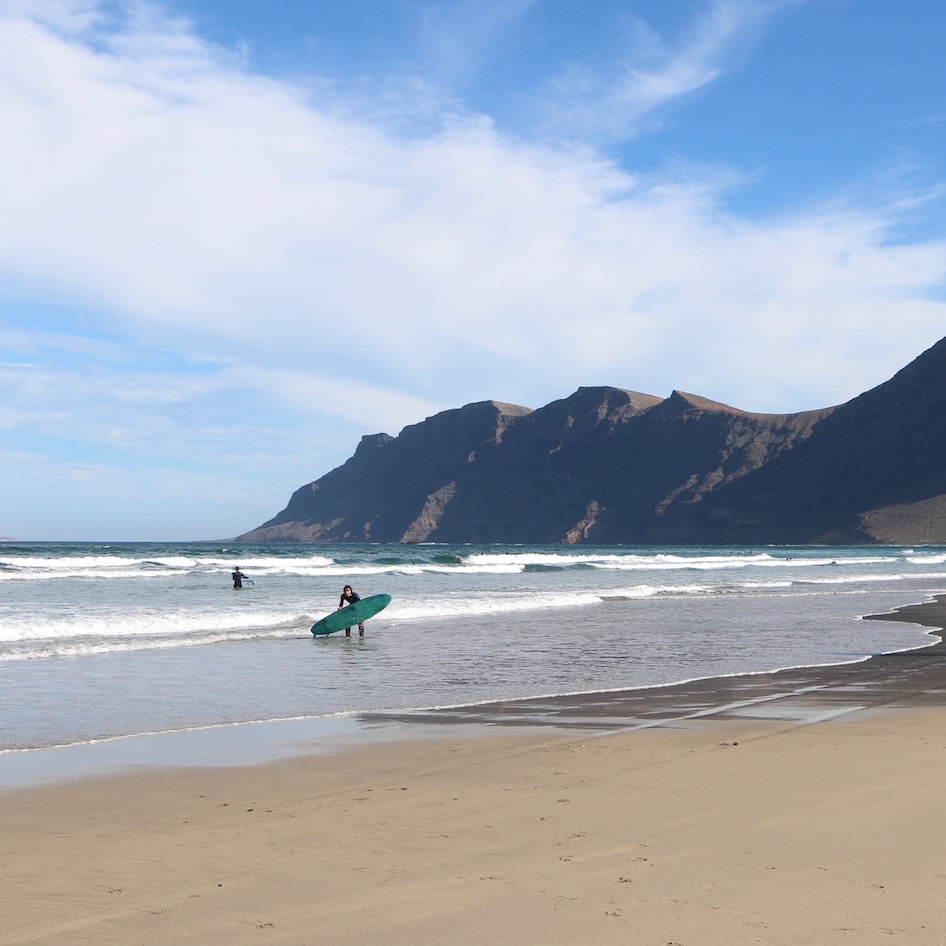 Bunny recently sailed across the Atlantic Ocean on the cruise ship Norwegian Epic. One of her last ports of call in Europe was Lanzarote in the Canary Islands. Bunny had been to Lanzarote in her previous life but didn’t remember much, apart from her visit to the spectacular Timanfaya National Park.

During her 8-hour long port call in Lanzarote, Bunny wanted to see and experience as much of the island as possible so she opted for a personalised island tour with Adventure Holidays Lanzarote. 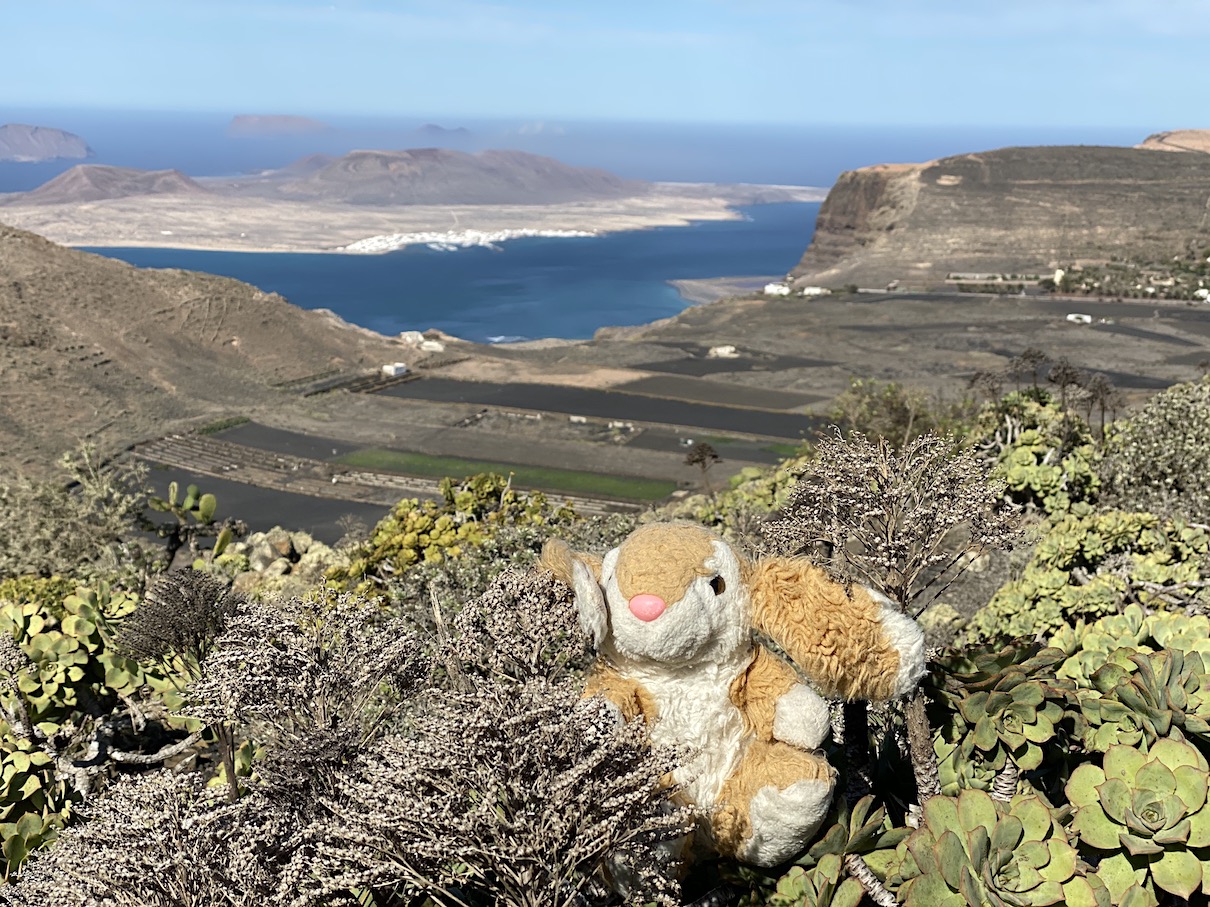 Cruise ship shore excursions can be a tricky thing. There’s never enough time to see everything you want and the hordes from the ship are going to flock to the most famous sites anyway. You can either join them and suffer the crowds through gritted teeth or do your own thing.

Bunny never goes on the crowded and overpriced excursions organised by the cruise ship. She always organises her own excursions, usually consulting TripAdvisor and CruiseCritic reviews and discussions boards, before making her decisions.

If you’re interested in knowing more, check out Bunny’s blog post on how to organise cruise shore excursions.

​In Lanzarote, Bunny’s first idea was to rent a car for the day. She had learned that driving would be quite civilised and that the roads would be good. However, when she made enquiries, all the rental cars were gone for the day! It seems Bunny was not the only one with that idea. As a result, Bunny ended up booking a day trip with Adventure Holidays Lanzarote.

David - or Crazy David, as he is known on the island - from Adventure Holidays Lanzarote advertises his personalised tours as showing you “the Real Lanzarote”, off the beaten track. The tours have no fixed itineraries or routes, as David prefers to make decisions on the day, customising the route to the weather and the client’s preferences and even their personalities. 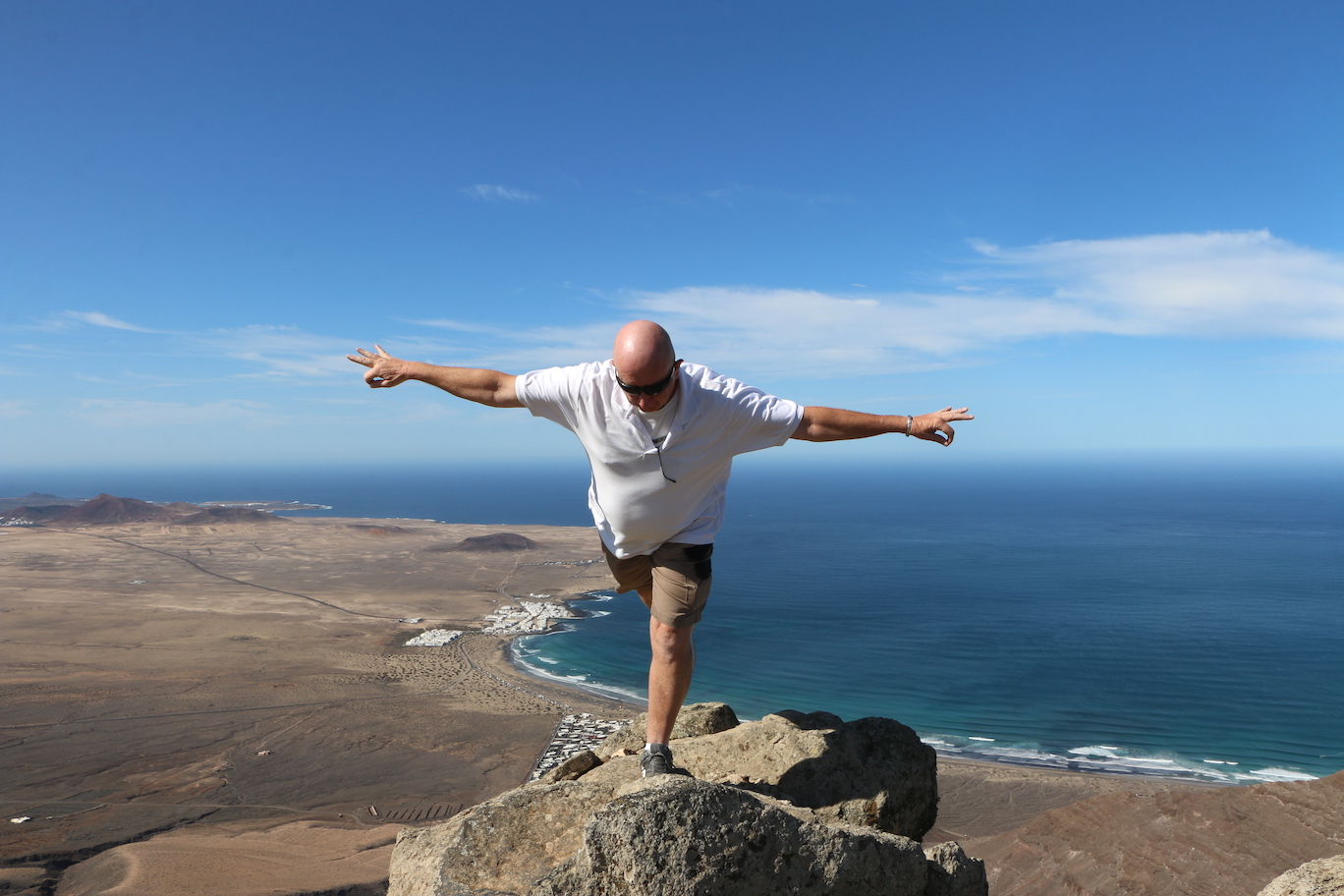 When it comes to travel planning, Bunny is usually a total control freak. After all, travel planning is the one thing she knows she is good at. For her day in Lanzarote, Bunny, very uncharacteristically, relinquished almost all control to David.

She exchanged a couple of emails with David ahead of the trip and simply listed her preferences: to experience great scenery and avoid the crowds and the touristic stupidity of such things as camel rides. And the rest was for David to decide. Luckily, he managed to deliver just what Bunny ordered.

Cruise ships to the island dock in the capital city of Arrecife, on the Eastern coast of Lanzarote. On the day Bunny visited, there were two mega ships in port, each carrying more than 4000 passengers. That’s a lot of day trippers for a small island…

David met the Bunnies right at the port and immediately proceeded to hug them both, just like old friends. Apparently, according to David, all humans (and Bunnies) require eight hugs a day. OK, then.

It soon transpired that David was fluent in corny jokes, the kind in which Mr. Bunny also excels, so the two of them easily found a common language. So, with the ice quickly broken, they set off to explore Lanzarote in David’s jeep in good spirits. 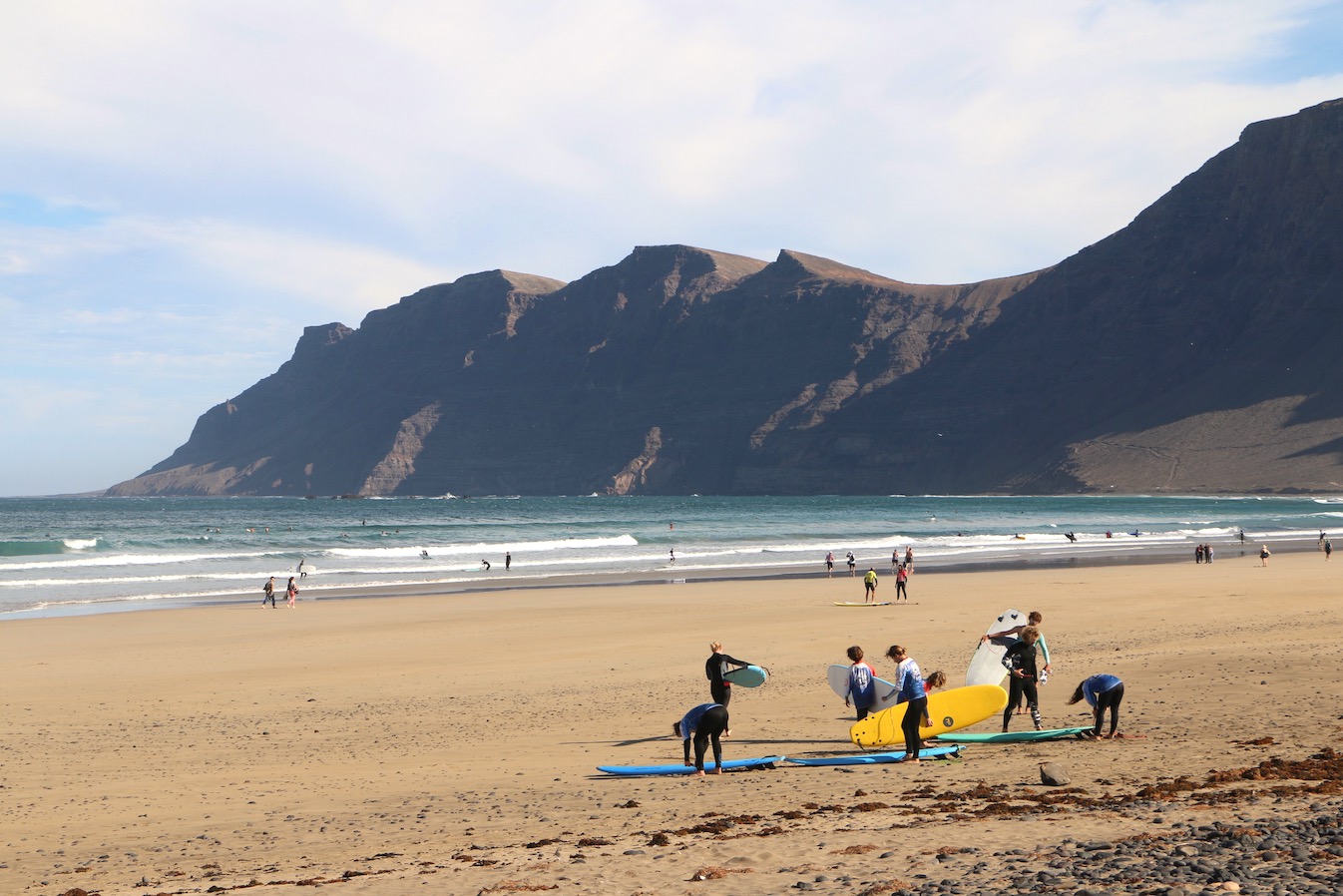 The first stop on the route was Caleta de Famara on the northwest coast of Lanzarote. It is a surfer village full of young, beautiful people with too much time on their hands. They are drawn to the place by the stunning Playa de Famara next door. It is a long and dramatic beach with spectacular mountain scenery, crashing waves and soft sand dunes. 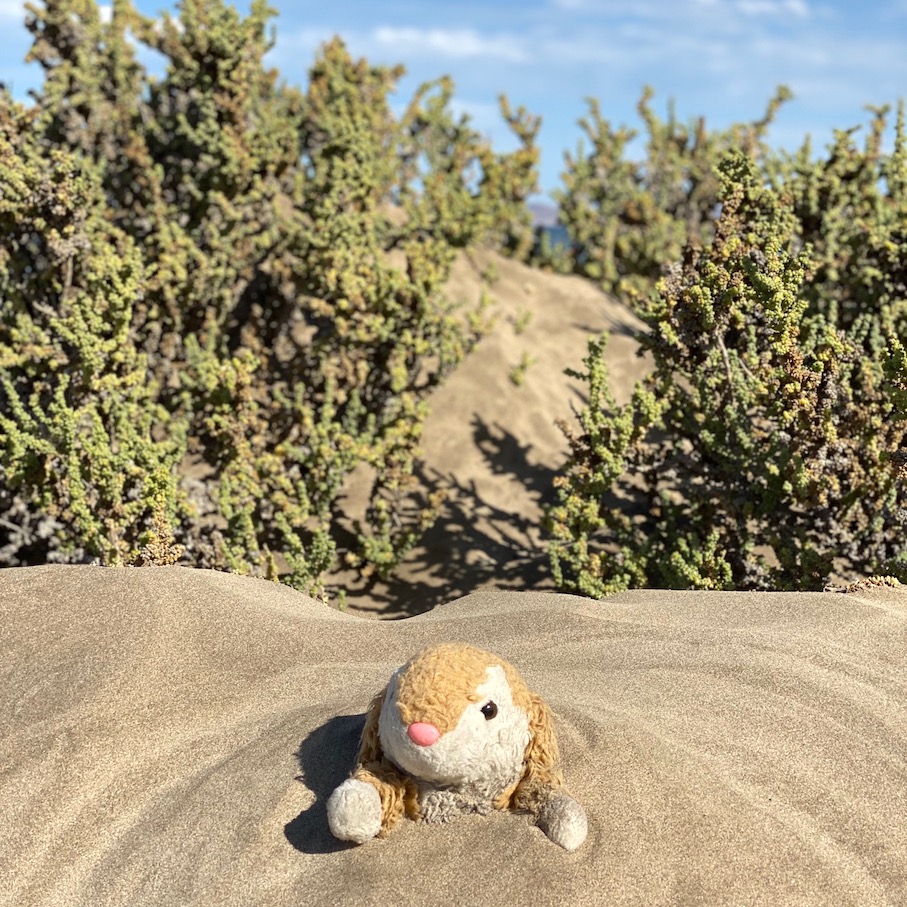 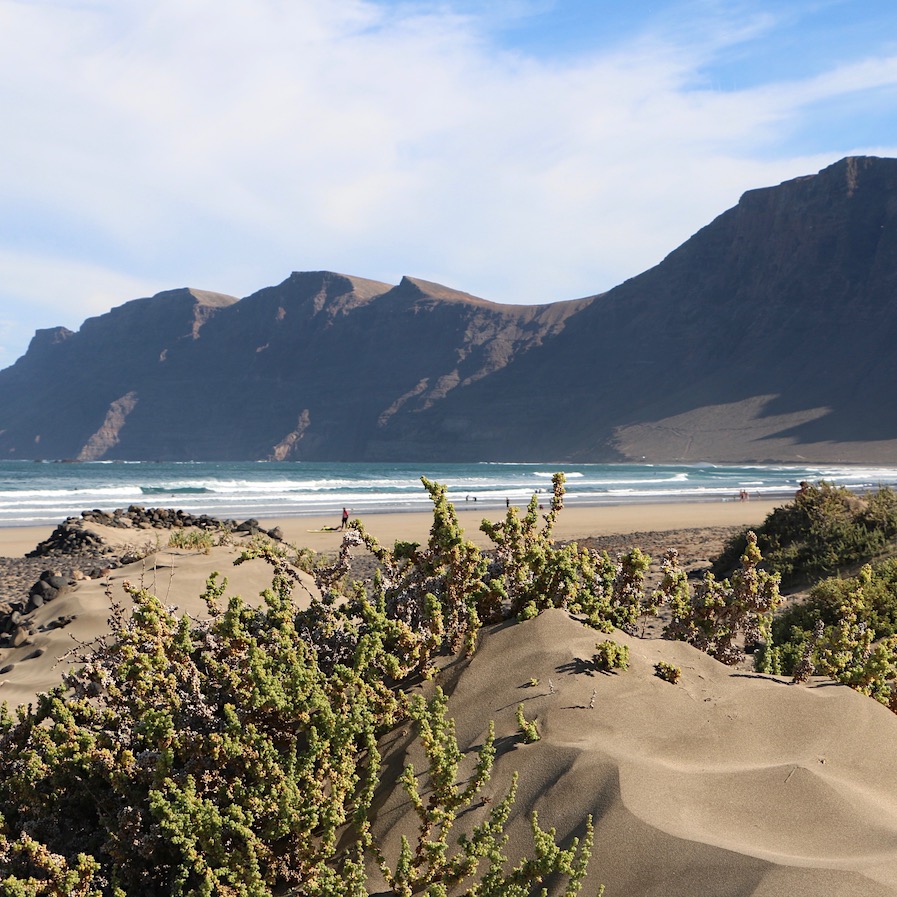 But beware. The gorgeous beach has claimed numerous lives over the years owing to its treacherous waves and currents, so Bunny refrained from swimming there. Surfers love it though and there were plenty of them riding the waves when the Bunnies visited.

Next to the beach, there is a white-washed holiday village, apparently favoured by Scandinavians, with excellent views to the bay.

After some time on the beach, David took a dirt road to a high point on the island atop Teguise, the old capital of Lanzarote.

Perched on top of Mount Guanapay is the Santa Barbara Castle, with commanding views to both coasts of the island. The castle hosts a Pirate Museum (not as cheesy as it sounds), which details the history of pirateering in Lanzarote. 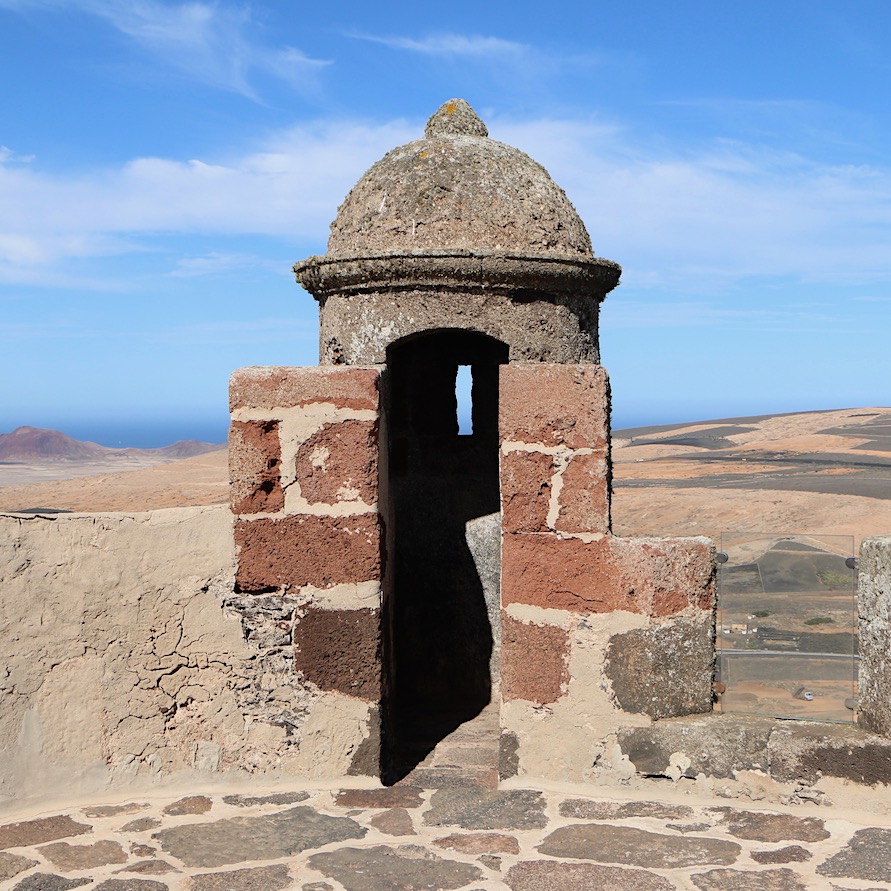 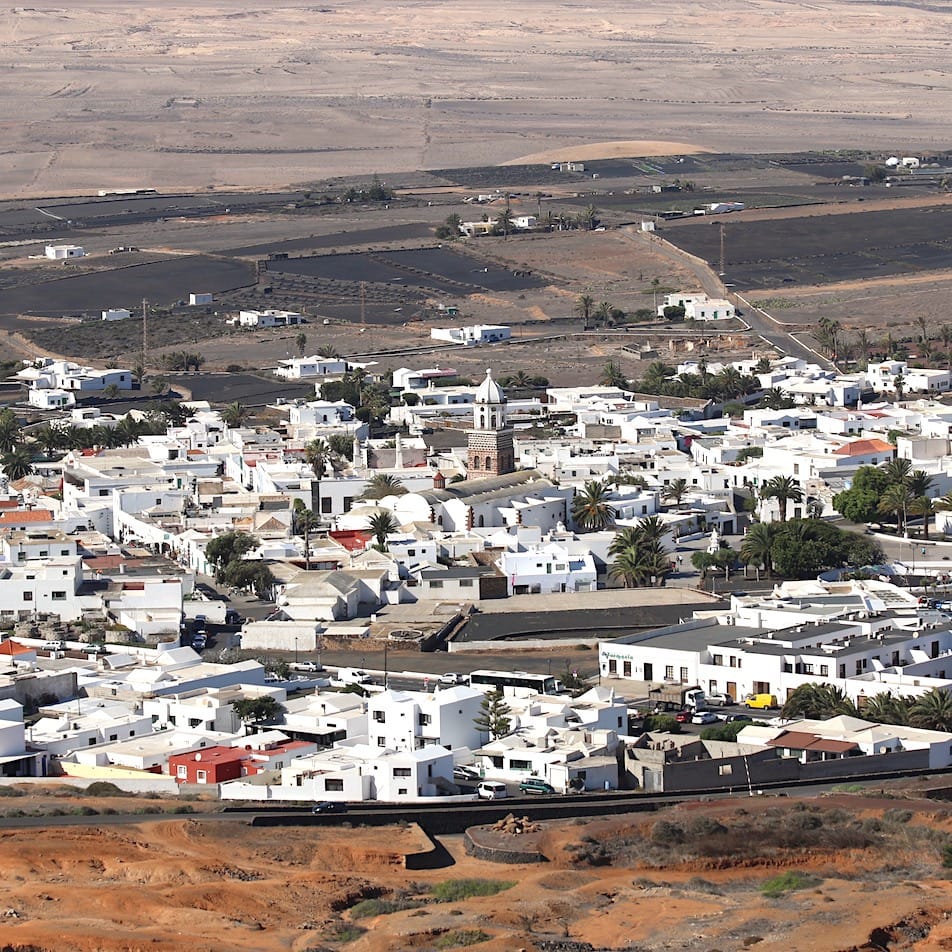 Starting in the 15th century, Lanzarote used to be a popular stop for ships crossing the Atlantic. The captains wanted to replenish their fresh food and water supplies before commencing the long journey, and often engaged in a bit of pirateering in the process.

The Santa Barbara Castle was built as a lookout tower and shelter for local inhabitants against these attacks which continued to plague the island until the 18th century.

The Bunnies admired the excellent views from the castle - the clear sunny day they were blessed with certainly didn’t hurt - and happily hopped around the Pirate Museum until it was time to continue the journey.

David next took the Bunnies to some nearby agricultural fields to explain the extraordinary farming methods employed in Lanzarote. 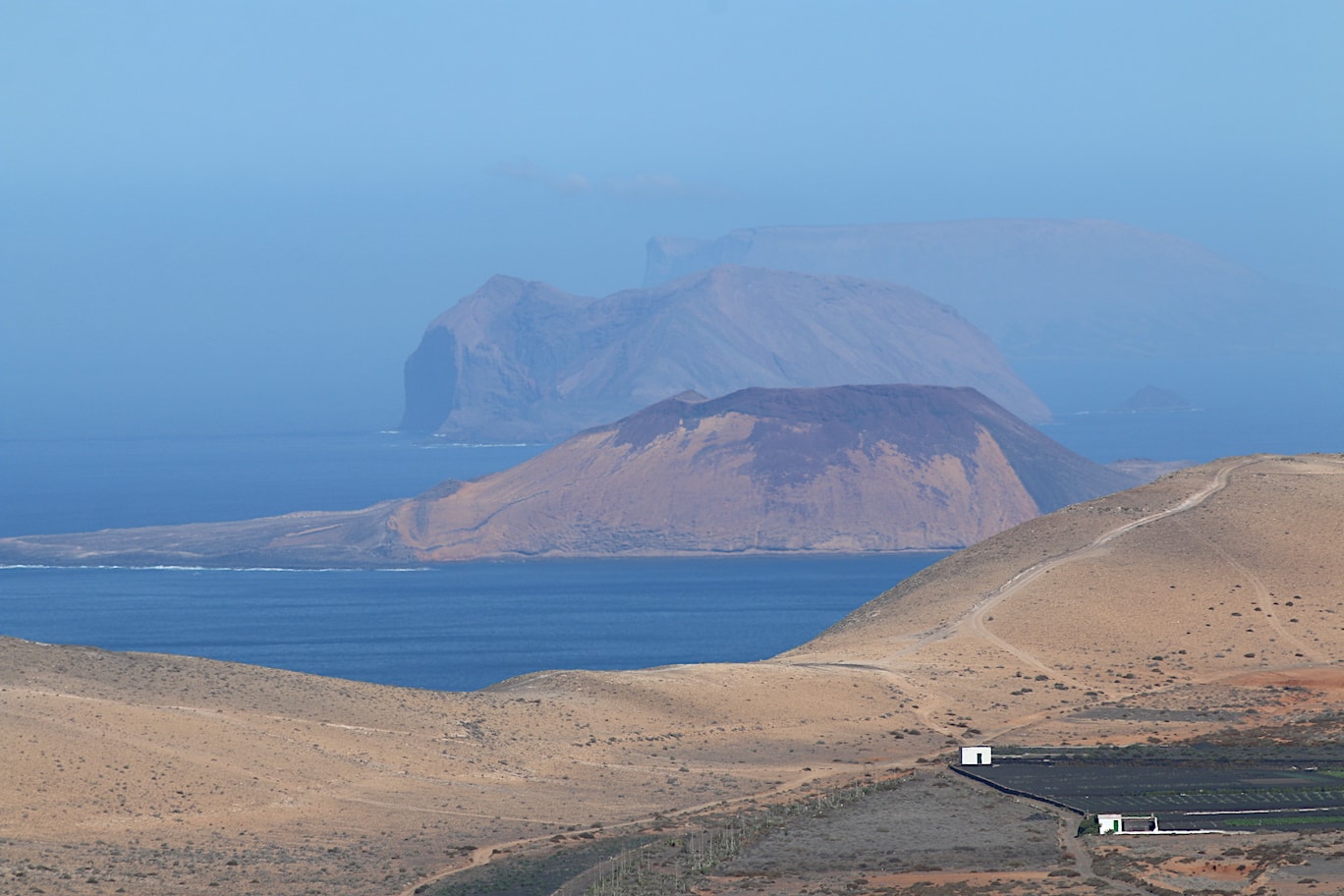 In the 1730s, Lanzarote experienced violent volcanic eruptions for almost six consecutive years. Lava and ash covered large areas of the island and thoroughly moulded its landscape. Because of the island’s dry climate and lack of erosion, the scenery today remains very similar to that created by the eruptions. Rain is very rare here and underground water resources are scarce. Does not sound like very fertile ground for agriculture, does it?

David explained that the crops on the island sprout from volcanic black grit, called picon. These small pumice-like pebbles keep the soil damp by capturing night-time dew and releasing it as a delicate way of watering the crops. Fields layered with picon sustain many kinds of crops, including impressive vineyards (more on that below), and explain Lanzarote’s success in farming despite the challenging conditions. 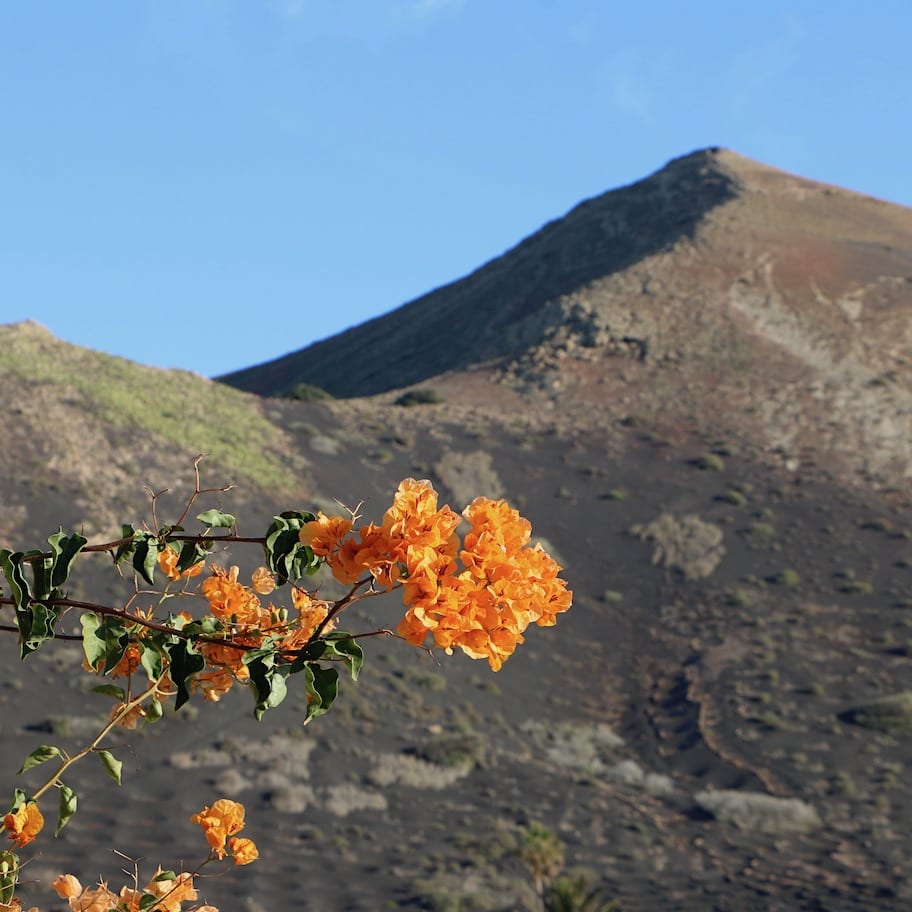 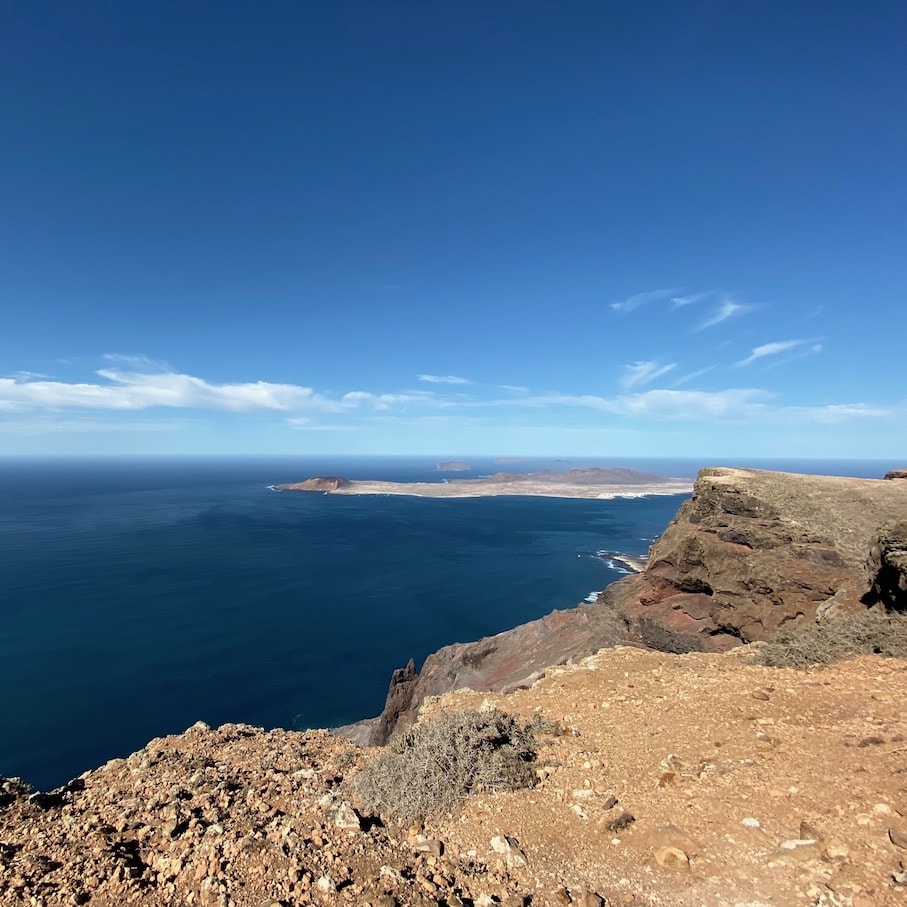 The Bunnies got another glimpse of Lanzarote’s volcanic nature when they climbed up another dirt road and saw a massive crater by the mountain side. Lanzarote has more than 300 volcanoes so it is quite easy to appreciate the volcanic nature of the place almost anywhere on the island without visiting the famous Timanfaya National Park. 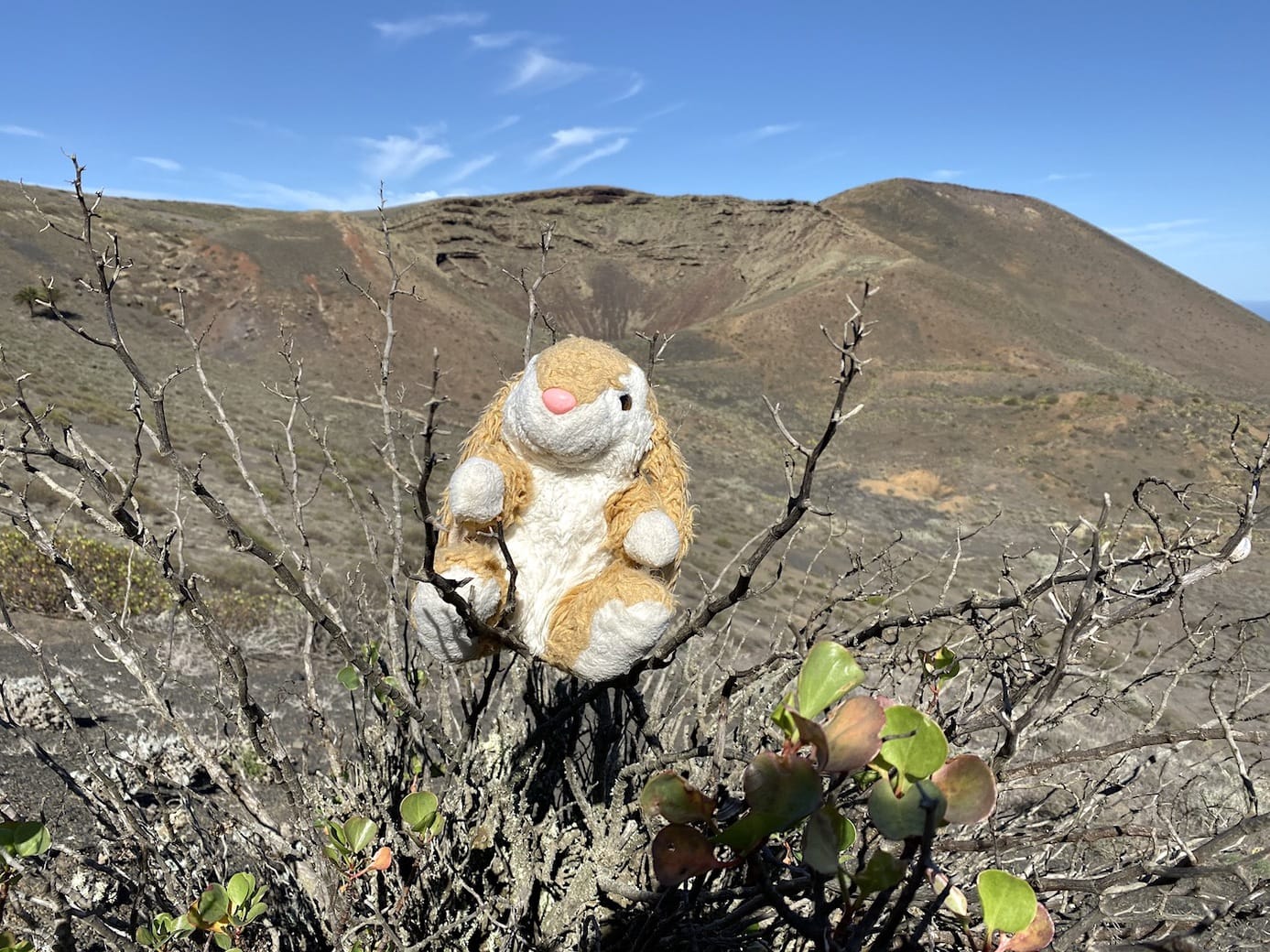 David provides water and snacks as part of his tour so the Bunnies enjoyed a quick break with a view to the crater. They did not want to “waste time” by sitting down for lunch anywhere but rather continued with the tour to take in as much of the island as possible in the short timeframe available.

The next viewpoint on the Western coast offered a gorgeous panorama towards La Graciosa, Lanzarote’s tiny sister island. Bunny particularly loved the deep blue shade of the sea and the sailboats anchored just offshore of La Graciosa. 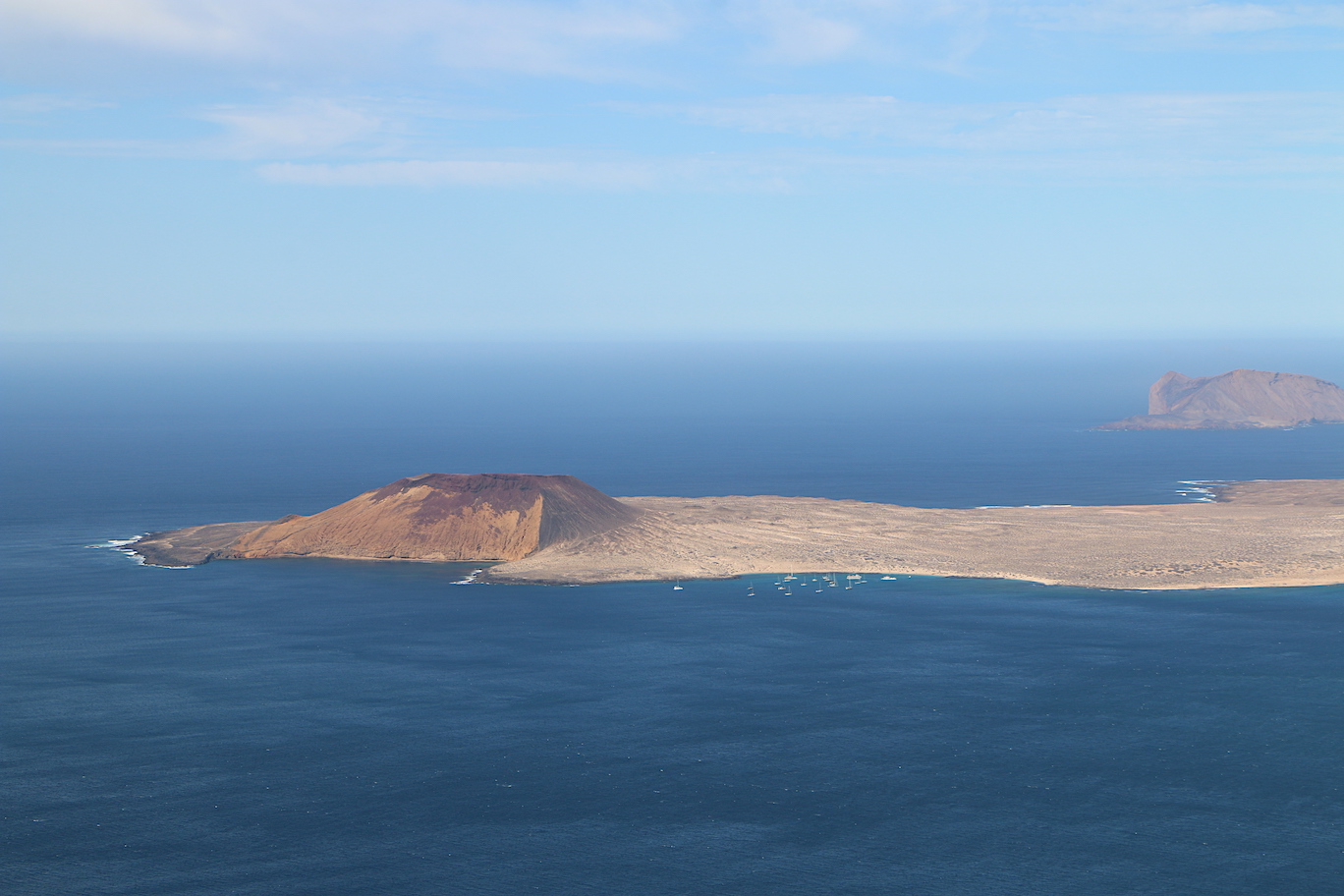 Afterwards, they drove past the highest point of the island and a Spanish military radar installation, taking a winding road towards Haria, a small village full of palm trees and surrounded by volcanic scenery. David told the Bunnies that when slavery was abolished, the villagers started planting palm trees to celebrate the birth of each child (one palm tree for girls, two for boys - hmph, Bunny says). Some villagers still continue the practice today.

Driving past impressive lava fields on the coast, Bunny requested a short swimming break. David stopped at a lagoon near Orzola close to the northernmost tip of Lanzarote. The beach reminded Bunny of Horseshoe Bay in Bermuda (although not quite as beautiful), where she had last swam in the ocean. The water was surprisingly warm and it was lovely to be on a beach again, even if just briefly.

Another unique stop followed at an abandoned prickly pear cactus field, where David provided a hands-on demonstration of this peculiar way of farming.

Almost 200 years ago, Lanzarote farmers began to raise cochineal insects on the fleshy ears of prickly bay cacti. The insects were used in the manufacture of the dark red dye carmine used as a natural colorant in lipsticks, sweets and drinks. 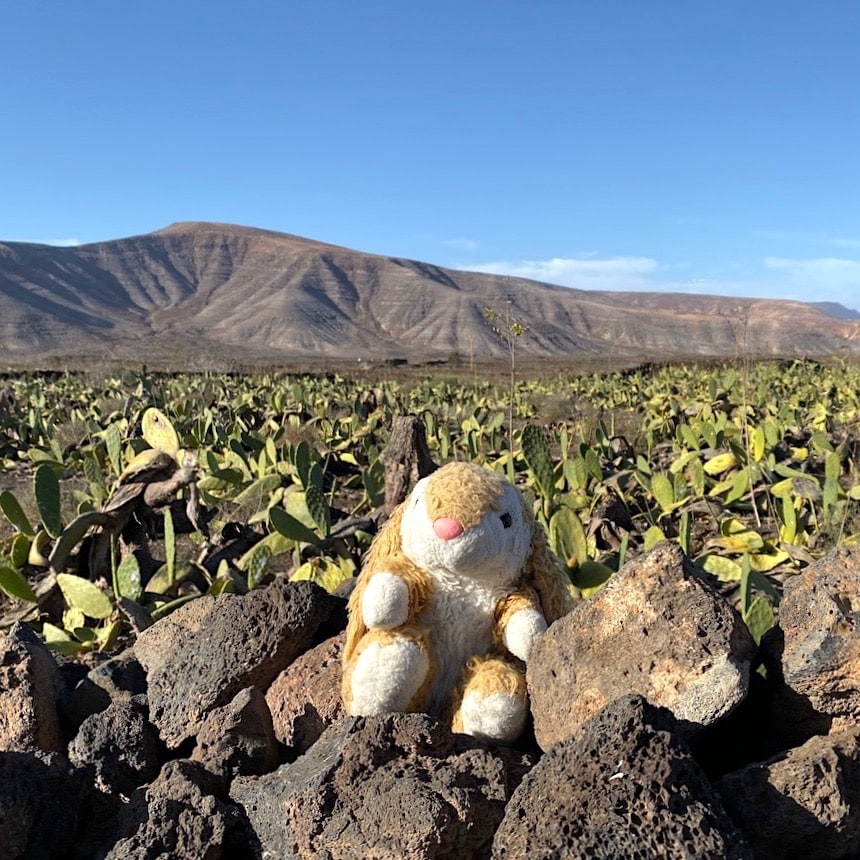 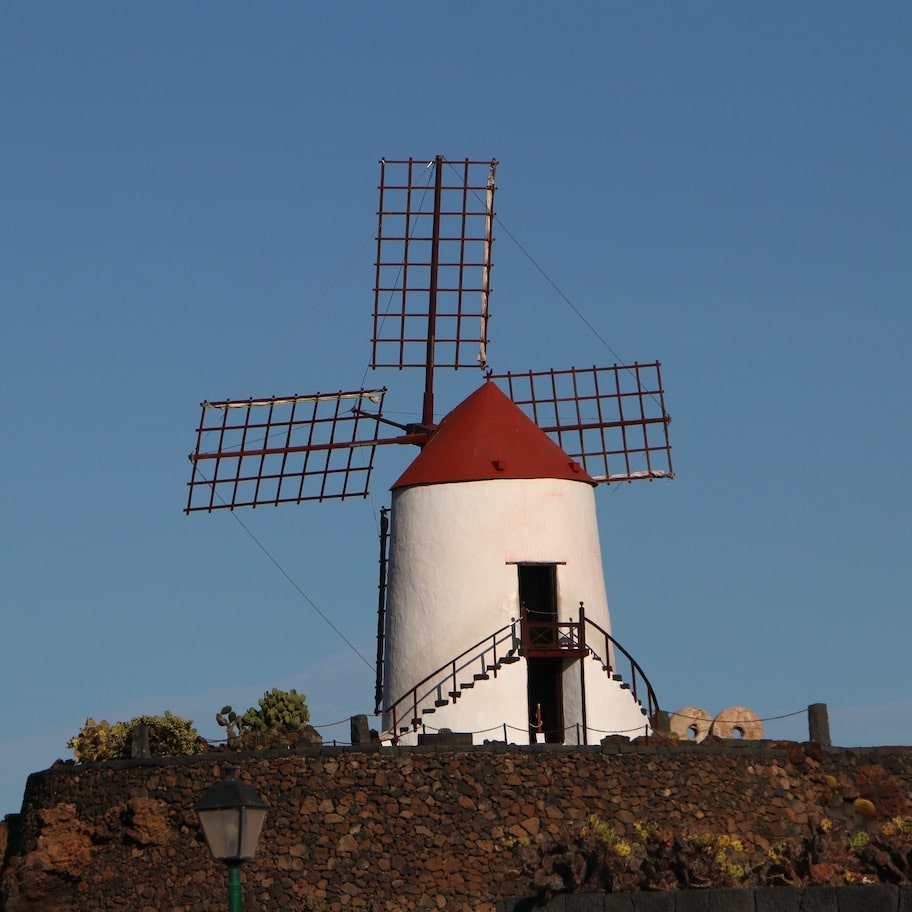 It is tough manual labour scraping the insects off the cacti, while avoiding the barbed cactus spines and enduring the blazing heat. Quite understandably, this is not a profession favoured by the island’s younger generation. As a result, it is now a dying trade and industry, particularly since cheap synthetic alternatives are readily available today.

Many of the prickly pear cacti fields the Bunnies saw on the day lay forsaken, taken over by weeds. It was a bit sad but also fascinating to see another form of agriculture that had fundamentally shaped life on the island for years.

After the cacti fields, David drove the Bunnies to another remarkable area of the island: Lanzarote’s vineyards.

Local farmers have developed a unique way of growing grapes on this windy, volcanic island. A wide, shallow hole is dug in the volcanic soil and a single vine is planted in the middle, protected by a semicircular barrier of volcanic rocks. Each vineyard has thousands of these holes, making the landscape a bit surreal and moon-like. 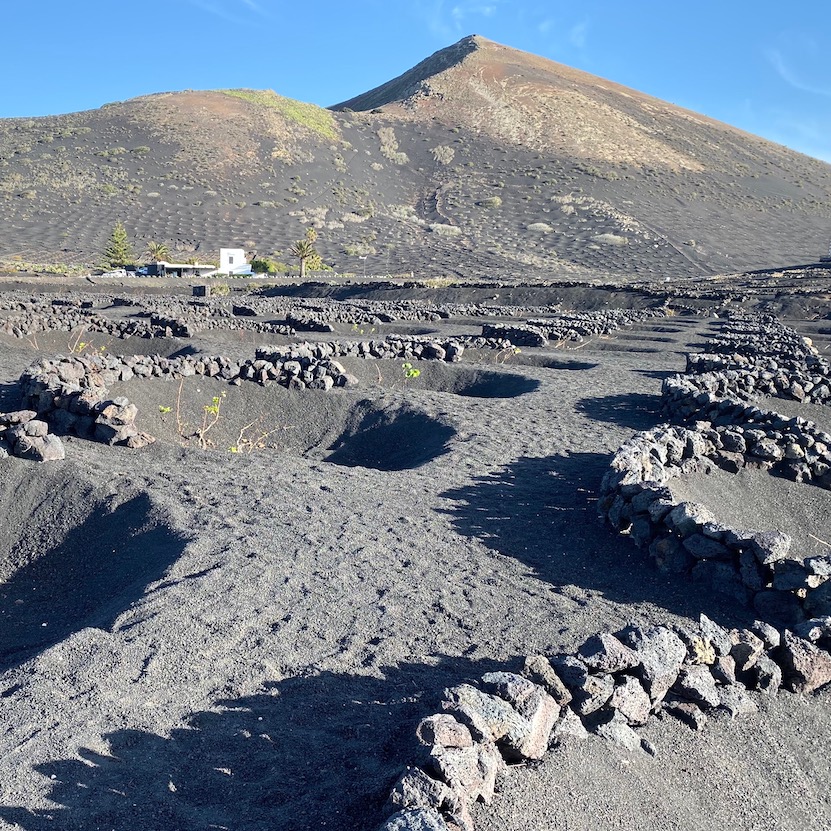 The Bunnies stopped at Bodegas Rubicon, one of the oldest wineries in the area, for a closer look at the fields and, naturally, some delicious wine-tasting. The winery was absolutely beautiful and very quiet, which made the Bunnies happy. The grapes grown were mostly unknown to Bunny, apart from a rather sweet variation of her favourite Moscatel.

Lanzarote wine production is quite small-scale and labour-intensive, so they practically export no wine. This was reason enough for Bunny to buy a bottle of red, Listan negro, to take back with her, despite the cruise line’s draconian policies about bringing your own booze onboard (Bunny is proud to report that she did manage to smuggle the said bottle onboard unnoticed!). 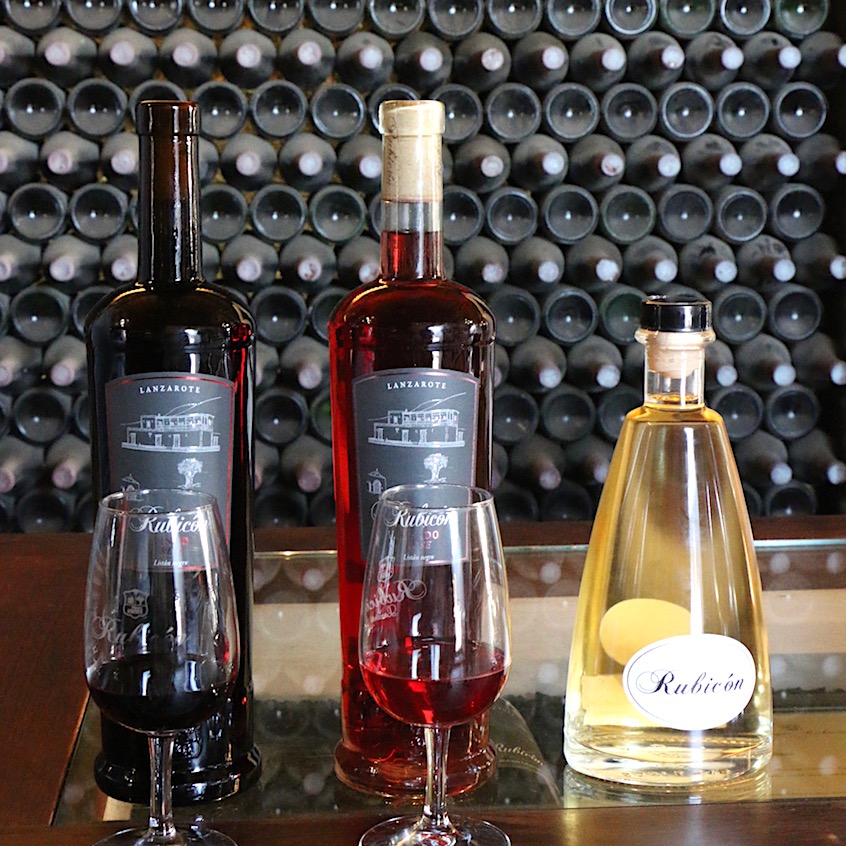 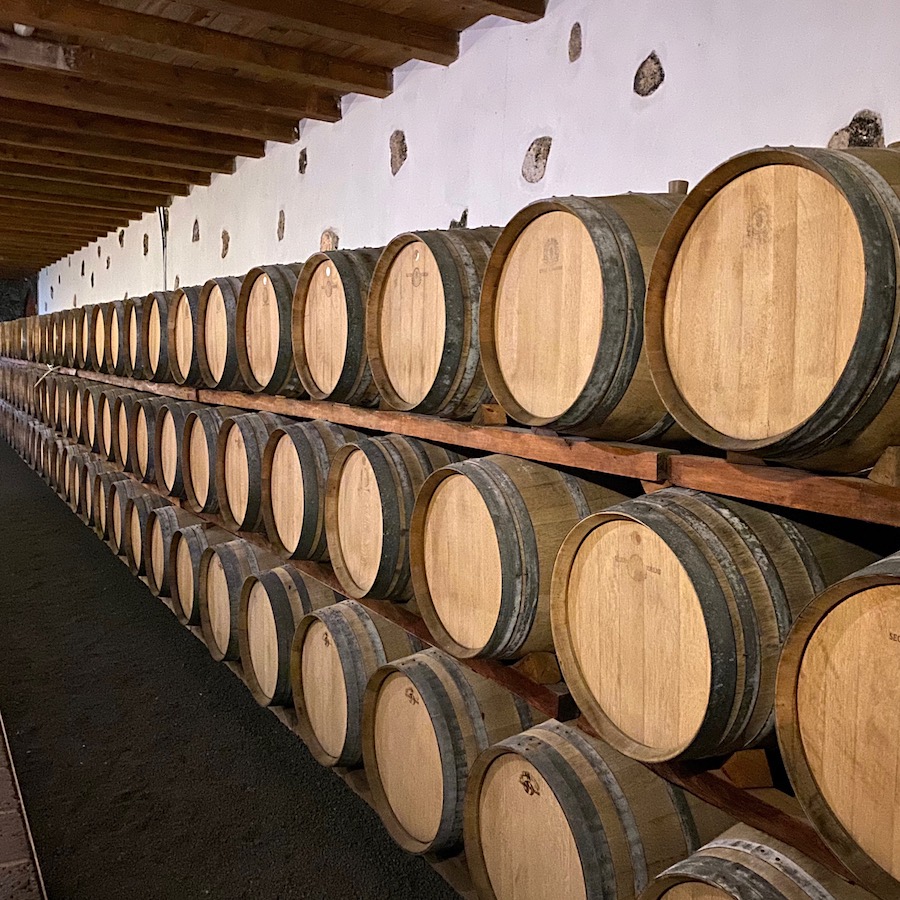 Wine-tasting was the last stop on the Bunnies’ “itinerary”. Afterwards all that was left was a drive back to the cruise port. They made it on time, with a generous 15 minutes to spare. Without all the wine in her system, Bunny might have been a bit more nervous about the close call but the libations helped her see it instead as perfect time management.

A couple of hugs and thanks later, the Bunnies were back onboard, filled with wine and gratitude for the lovely day David helped them spend in Lanzarote. 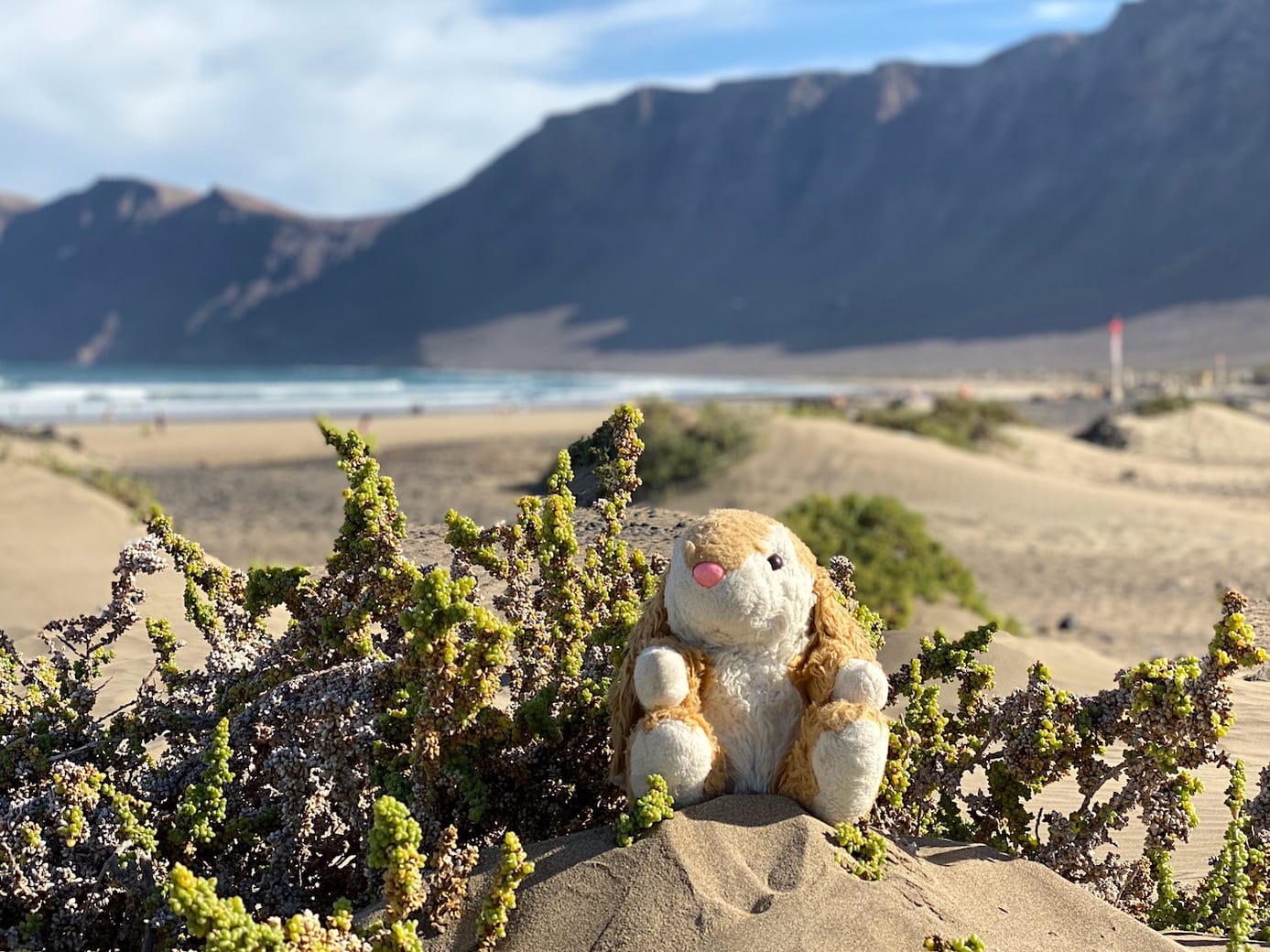 Bunny could not have been happier with her tour with Adventure Holidays Lanzarote. It was fun, easy and informative, providing lots of unique and diverse insights to the island. Amazingly, they did not get even a glimpse of the crowds that were exploring the island on big, organised tours at the same time.

And on top of everything, David provided his tour for a very affordable price. If all this is not the definition of a perfect shore excursion, then what is, Bunny asks?